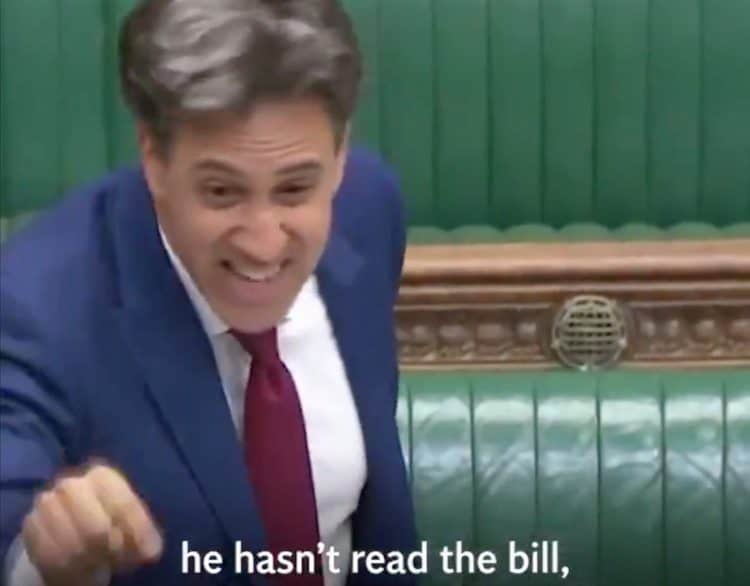 Boris Johnson has threatened to re-write parts of the Northern Ireland Protocol that formed part of the Brexit deal he struck with the European Union.

The prime minister headed to Belfast this week to meet leaders of the Stormont parties in an attempt to secure progress – but he also used the trip to issue a warning to Brussels that the UK is prepared to rewrite unilaterally the terms of the Brexit deal he signed.

The move could risk a trade war with the European Union, but Mr Johnson is frustrated that talks with Brussels to resolve the protocol problems have not made sufficient progress.

Warnings over the potential fallout from the agreement were aired years ago by Ed Miliband in parliament.

In one jaw-dropping moment, the PM was offered the chance to defend his bill – but Johnson remained seated, his arms folded.

Miliband challenged the PM to say which part of his Internal Market bill would stop the “blockade” Johnson had claimed would prevent goods travelling from Great Britain into Northern Ireland.

“Important to take a step back”

Miliband then hit out at Johnson for trying to blame everyone else for the failures of the deal – something he has started to do again this week.

The former Labour leader told the Commons: “Let’s just get this straight for a minute, because I think it is important to take a step back, what the Prime Minister is coming to the House to tell us today is that his flagship achievement, the deal he told us was a triumph, the deal he said, as I said, was oven ready, the deal (on) which he fought and won the general election is now contradictory and ambiguous.

“What incompetence. What failure of governance. And how dare he try and blame everyone else.

“There’s only one person responsible for it, and that is him. This is his deal, it’s his mess, it’s his failure.”

The then shadow business secretary continued: “I don’t understand this, he signed the deal, it’s his deal, it is the deal that he said would protect the people of Northern Ireland.

“And I have to say to him, this is not just legislative hooliganism on any issue, it is on the most sensitive issues of all.

“And I think we should take the word of two prime ministers of this country who helped secure peace in Northern Ireland.”

Related: Reporter asks Johnson: ‘You must be furious with whoever signed this deal’