Gabriel Boric will push for higher minimum wages, the creation of more jobs for women and greater environmental protections. 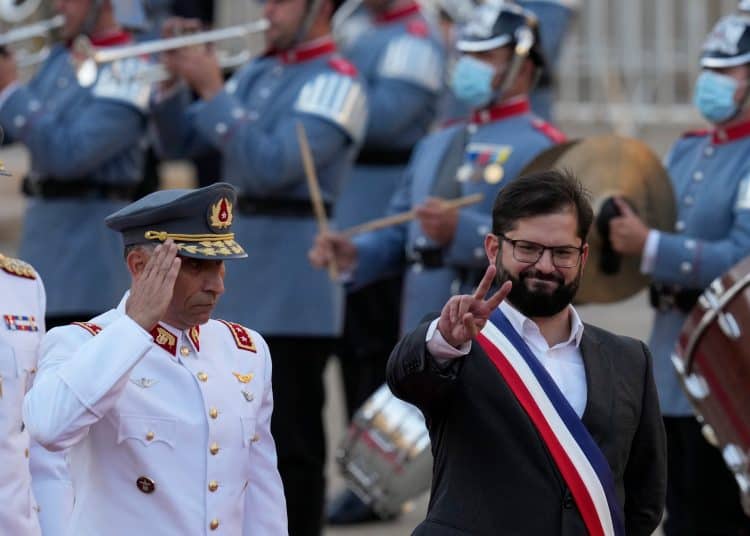 Left-leaning former student leader Gabriel Boric vowed to improve the lives of all Chileans and attack deep inequality that has sparked massive protests, hours after being inaugurated as the youngest president in the country’s history.

At 36, Mr Boric was only four years old when democracy returned to the South American nation following a 17-year military dictatorship that both bloodied and set the groundwork for modern Chile.

Mr Boric has vowed that his young, inclusive government will attack poverty and inequality that he said are the unacceptable underbelly of a free market model imposed decades ago by General Augusto Pinochet, who ruled from 1973 to 1990.

“We come to give ourselves body and soul to making life better in our country,” he said in a speech from a balcony of the government building, calling for unity to make Chile “a dignified and just country”.

“The road will undoubtedly be long and difficult,” he said.

His four-year term begins at a moment when a constituent assembly is drawing up a new constitution for the country to replace one adopted under Pinochet.

The Socialist Party leader of the Senate, Alvaro Elizalde, draped the presidential sash over Mr Boric’s shoulders during the ceremony in the legislative chambers in the port city of Valparaiso.

Soon afterward, Mr Boric swore in the leader of what he has called a “feminist” cabinet — which includes 14 women and 10 men.

Ostentatiously informal, the bearded young leader declined to wear a tie for the inauguration.

Mr Boric won 56 per cent of the vote in a December run-off against conservative Jose Antonio Kast.

While his election initially scared investors, causing drops in stock prices and the peso, he has since stressed a pragmatic streak, vowing to maintain fiscal responsibility and naming a respected economist, former Central Bank president Mario Marcel, as finance minister.

“We are going to have to make the changes step by step because if not, the risk of falling back is too great,” he said recently — a stance that may be enforced by the fact his leftist coalition has only 37 of the 155 seats in congress.

Even adding other centre-left parties, his allies fall just short of a majority.

Chile has long been seen as one of Latin America’s greatest economic success stories, bolstered in part by its vast mineral industries.

But it has been rocked over the past decade by repeated large protest movements, some led by Mr Boric, demanding better education, pensions and health care, as well as a more egalitarian distribution of wealth.

Boric takes office as well at a moment when large-scale immigration from Venezuela and other countries has caused unrest in northern Chile while violent protests by some Indigenous rights activists demanding historic territories have caused clashes in the south.

It’s also a moment of international turmoil due to fallout from the coronavirus pandemic and the conflict in Ukraine.

Boric has called for greater taxes on the wealthy to help finance improved health care, education and a universal pension plan to replace a privately run system that has proven inadequate for many.

He has also pushed for higher minimum wages and the creation of more jobs for women, in particular.

He also campaigned for greater environmental protections in a country famed for its enormous copper mines.

Any changes may result less from Boric than from a new constitution.

The assembly drafting it is due to finish this year, offering it to voters for ratification or rejection.

In his speech, Mr Boric said he hopes when his term ends in four years, we “feel that it is a country that protects us, that welcomes us, that takes care of us and guarantees our rights and justly rewards contribution and sacrifice.”