Four years after we exposed the ‘New Brit peddling bigotry on Facebook’, we talk to Caolan Robertson about his new project helping people escape radicalisation. 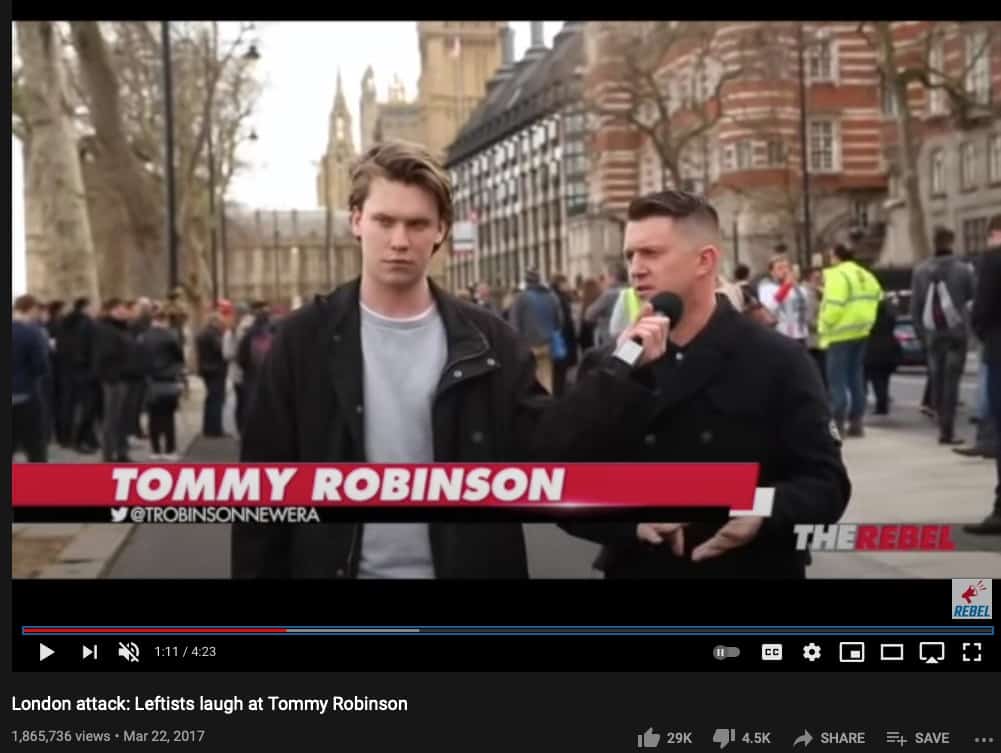 In January 2017, as tens of thousands of women took to the streets to protest against the inauguration of Donald Trump, a new far-right personality was thrust into the limelight as Raheem Kassam, Breitbart and a wave of misogynistic social media fans shared footage of Caolan Robertson shaming unsuspecting campaigners for their placards opposing sexism, fascism and racism among other things.

Two months later he was spotted outside the Houses of Parliament alongside an enraged Tommy Robinson following a terror attack on Westminster Bridge proclaiming that the blood is on the “hands of the left” for allowing such events to unfold. “If you import a culture, you get a culture”, he said, describing Islam as a “culture of violence, destruction and terrorism” and saying that it should come as “no surprise to see it on our streets.”

Some years later, in a Divided interview described by VICE as being ‘remarkably soft’ on the former far-righter, Robertson referred to the footage as “cringe”, saying he “can’t watch those videos anymore”. After slipping down what he described as an “alt-right rabbit hole” he is out for a shot at redemption, working on a new project helping people escape radicalisation.

Four years after we exposed him as the ‘New Brit peddling bigotry on Facebook’, we caught up with him to discuss those events, how he escaped the clutches of the far right and how he is now helping others do the same thing.

Shortly before our interview with Caolan Robertson news filtered through that the Supreme Court had ruled that Shamima Begum would not be allowed to return to the UK to fight her citizenship case.

Two years ago, Robertson said, that would have provided the perfect fodder for Rebel Media and Alex Jones’ videos, which he created for their social media audiences to provoke a stir.

“I would have said she was never British anyway because anyone who joins the Islamic State is pledging allegiance to another nation,” he said, adding that he would have probably “verged on racism a bit” by making her out to be “not as British as everybody else”.

His reaction today showed a similar willingness not to hold back. “She’s a c*nt”, he said, but she’s a “British c*nt”, and revoking her passport sets an “extremely dangerous precedent” that makes citizens whose parents were born elsewhere “feel like their passport is worth less”. That’s a “worrying tone”.

The British court’s ruling also flies in the face of what he is doing with Future Freedom, which is to “believe that people can change” and that, with the right help, they can escape the clutches of right-wing radicalisation. But more of that later.

How I was radicalised

First off, I was eager to address how Robertson was radicalised in the first place, starting with the Trump inauguration protest which brought him to our attention in 2017. At the time he wasn’t affiliated with any groups or any notable figures, so what made him pick up a camera and create provocative footage for his Facebook page, the ‘New Brit’?

“I felt like no one had ever done any counter content to kind of left-wing political groups that were happening in Britain at the time,” Robertson told us, adding that he believed the ‘cancel culture’ had “got out of control” and that he had become exasperated with all Brexiteers being branded “racists” and all Trump supporters being tarred with the same brush.

The pursuit of an alternative voice was not hard to find. Once you form a certain belief in today’s social media world you don’t have to look for content to support it – it finds you.

“I was watching lots of Rebel Media videos that were basically repeating all this as well, that the left wasn’t was out of control. And also, like, I was heavily recommended this stuff, I didn’t look for rebel media content, I didn’t type in far-right, right-wing content”, he said.

“I remember when the Orlando shooting happened. Back in 2015 2016. I typed Orlando shooting into YouTube, and the top-rated results were Milo. And once I’d watched those videos, they recommended a shit tonne more. And I just like went down that rabbit hole watching it all.

“That kind of made me really think it was like basically normal to believe that stuff.”

Had I have asked Robertson in 2017 if he considered himself ‘far right’ he would have said “definitely not”, but he did believe in “free speech”, which is where the seeds of radicalism are often sewn. Ideas that he considered to be “normal”, “innocent” and even “progressive” were being “suppressed” in the mainstream media, pushing him towards fringe outlets.

One such outlet, Rebel Media, became his employer and it was there that Robertson met another man who had been ignored and chastised for his views by the “posh elite” media in the shape of Tommy Robinson.

The former EDL leader certainly fit the character profile as a working-class guy who loved his country but was being scapegoated for it as a result. If it could happen to him, Robinson would say, it could happen to you, warning that “you’re going to be under attack” but “we’ll look after you”.

They worked closely together to build up Robinson’s profile, editing videos to give them production value and handling his PR. “Obviously, he turned out to be a very different person in reality,” Robertson said, adding that he would overhear him making racist and homophobic comments and that he also turned out to be quite violent.

But it wasn’t until he started creating content for Canadian alt-right political activist, Lauren Southern, that he, in his words, “started to pullback”.

Recalling a moment that changed his perspective, he said:

“I was travelling to Turkey to do a documentary about the migration crisis. I remember we were camping out down the side of a hill, and we were waiting for human traffickers to bring refugees into rubber boats and send them to Europe. I was expecting like angry fighting as young men who were going to be, you know, invading Europe, and we were really worried about our safety. But the people that emerged through the bushes were like, genuine refugees, they were old women, there were young children. They were people that had all their belongings and possessions and Bin bags over their shoulder. And it was heartbreaking. They had stories about how they didn’t want to leave, and they were fleeing.

“And I know many people will be like, well, obviously, but for me and millions of other young people in Britain and America we genuinely believed that these people were here to invade whenever they settled anywhere in Europe because that is what our newsfeeds were pumped full of.

“So I started pulling back at that point, I started feeling like I’ve been part of something really horrific. That’s actually demonised.”

Pinpointing the causal relationship between watching a Milo video on YouTube and becoming radicalised is what underpins the work Future Freedom is doing now. As we know, nobody wakes up one day and just decides they are a right-wing extremist, so having an understanding of that journey could be crucial in helping others.

As Robertson says, “a lot of these people don’t have families anymore, because of the extremism that they were involved with, or friends and they have nowhere to go, and I feel like it’s an important resource.”

Crucially, it is modern. It is set up to deal with the sort of radicalisation that he was involved in which “isn’t neo-Nazi groups, it isn’t the EDL – it’s YouTube.”

“So we set it up to directly tackle that, and also to show that we understand, and that you don’t have to be far left to walk away, you just have to walk away, that’s all I care about is the decline of the far-right and making it smaller place.”