Police Service of Northern Ireland (PSNI) Chief Constable Simon Byrne previously warned of a “febrile” atmosphere and urged people to step back from the brink of violence. 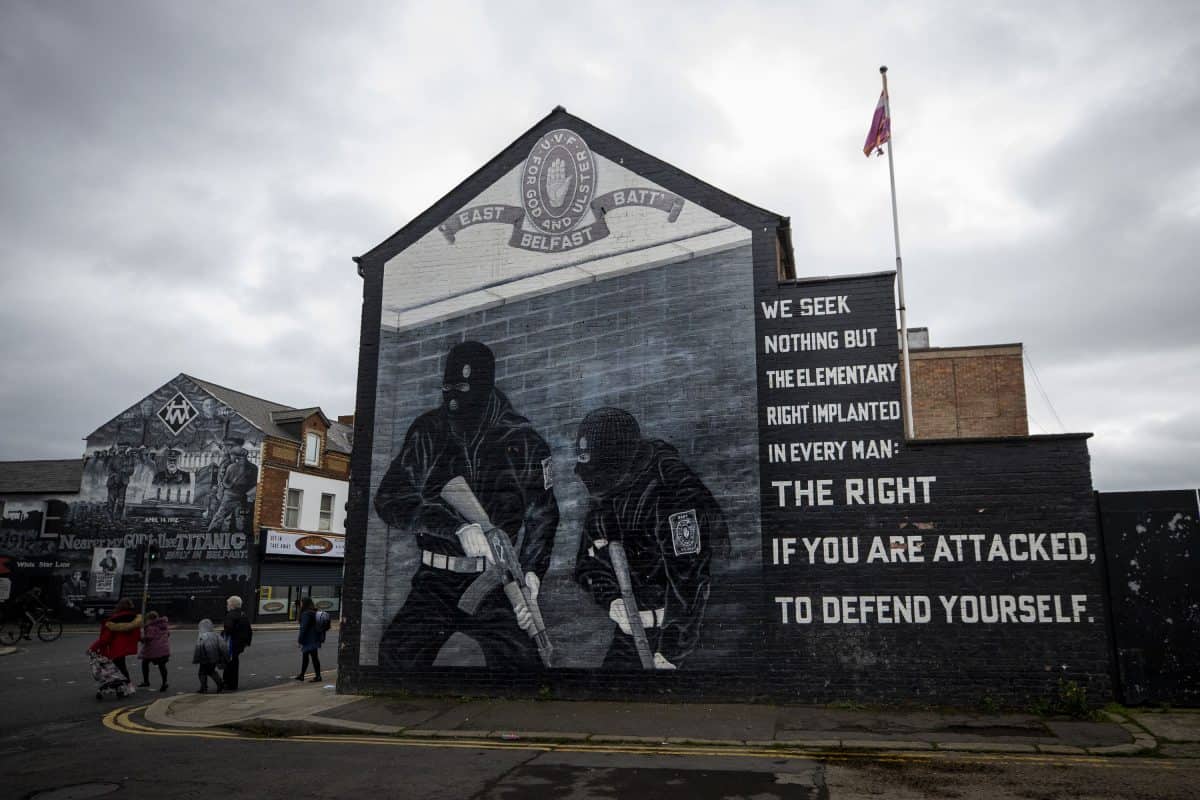 The outlawed groups said they were temporarily withdrawing their backing of the Belfast/Good Friday accord amid mounting concerns about the contentious Northern Ireland Protocol governing Irish Sea trade post-Brexit.

However, they stressed that unionist opposition to the protocol should remain “peaceful and democratic”.

The 1998 agreement that loyalist paramilitaries endorsed 23 years ago ended decades of violence and established devolved powersharing at Stormont.

UK ministers are facing a backlash from unionists who fear the post-Brexit protocol threatens Northern Ireland’s place in the UK internal market.

The DUP and other unionist parties are pushing for the protocol to be ditched, claiming it has driven an economic wedge between the region and Great Britain which undermines the union.

A letter sent to Mr Johnson by an umbrella body representing the paramilitaries said their stance in respect of the Belfast Agreement would continue until the protocol was amended to ensure “unfettered access for goods, services, and citizens throughout the United Kingdom”.

The development came as the UK Government took unilateral action on Wednesday to extend a grace period that has been limiting the volume of red tape associated with moving agri-food goods from GB into Northern Ireland.

The EU criticised the Government move to extend the exemption period, which was due to run out at the end of the month, until October, claiming it risked breaching the terms of the protocol.

Goods arriving into Northern Ireland from GB have been subjected to added processes and checks since the Brexit transition period ended on December 31.

That bureaucracy is set to intensify significantly when the grace period ends, as from that point supermarkets and other retailers will require EU export health certificates for agri-food products brought in from GB .

The letter to the Prime Minister was written by David Campbell, chairman of the Loyalist Communities Council. Mr Campbell has penned a similar letter to Irish premier Micheal Martin.

The LCC represents the Ulster Volunteer Force, Ulster Defence Association and Red Hand Commando, which were responsible for many deaths during 30 years of conflict.

The main loyalist and republican armed groups signed up to principles like commitment to non-violence during discussions which led to the signing of the Belfast Agreement in exchange for early release of prisoners.

The letter says: “We are concerned about the disruption to trade and commerce between Northern Ireland and the rest of the United Kingdom that is occurring, but our core objection is much more fundamental.”

It said during the Brexit negotiations the Government and the EU said it was paramount to protect the Belfast Agreement and its built-in safeguards for the two main communities in Northern Ireland.

The letter said the operation of the protocol “repeatedly breaches those objectives”.

Mr Campbell insisted the LCC leadership is determined that opposition to the protocol should be “peaceful and democratic”.

“However, please do not under-estimate the strength of feeling on this issue right across the unionist family,” he adds.

“The only time I can remember such unanimity of opposition was following the imposition of the Anglo-Irish Agreement in 1985.

“Accordingly, I have been instructed to advise you that the loyalist groupings are herewith withdrawing their support for the Belfast Agreement until our rights under the agreement are restored and the protocol is amended to ensure unfettered access for goods, services, and citizens throughout the United Kingdom.

The protocol is designed to prevent the imposition of a hard border on the island of Ireland by keeping Northern Ireland following EU trade rules.

It has caused disruption to some goods travelling from the rest of the UK as suppliers have struggled to overcome extra red tape.

Police Service of Northern Ireland (PSNI) Chief Constable Simon Byrne previously warned of a “febrile” atmosphere and urged people to step back from the brink of violence.

Inspection staff at ports were temporarily withdrawn from duties earlier this year in response to sinister graffiti, but they later resumed their work after police insisted there was no credible threat against them.

That move, the legality of which has been disputed by executive colleagues, did not impact ongoing checks, as those are happening at temporary port facilities.