“Everyone here is saying to me that because of Brexit it is much easier to find safety in the UK,” one refugee said. 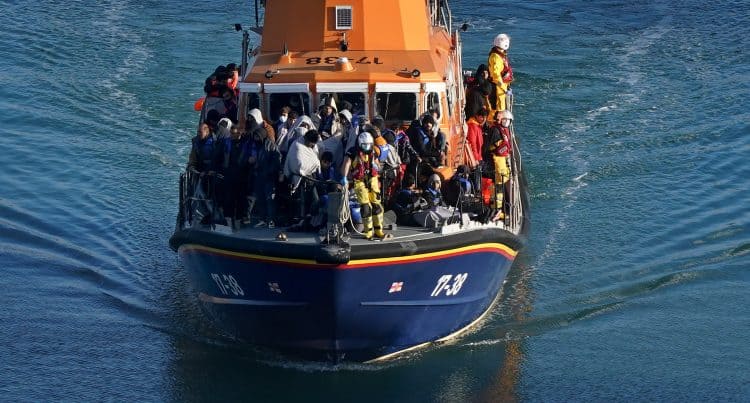 Refugees living in northern France say Brexit has made it easier for them to reach the UK in small boats, according to reports in The Guardian.

A record 1,185 people reached the UK on Thursday after risking death on board small boats in the English Channel, a new record for a single day.

However, despite their efforts, three people are feared lost at sea after two kayaks were found adrift off the coast of Calais.

Thursday’s total, confirmed by the Home Office on Friday, is the highest for daily arrivals during the current crisis, surpassing the previous record of 853 set earlier this month.

In October 2020 Boris Johnson said Brexit would enable Britain to take back “full control of our money, our borders and our laws”, an assumption that has been trotted out by many on the far right.

“Are we supposed to just sit about politely while Farage points at the sea like a lunatic?”

There could be a good reason why the number of migrants crossing the channel by boat has increased.

Previously, when the UK was part of the EU, under a mechanism known as Dublin the UK could ask other EU countries to take back people they could prove had passed through safe European countries before reaching the UK.

The UK could make “take charge” requests and officials were often able to prove that asylum seekers had passed through other countries thanks to the Eurodac fingerprint database.

But since Brexit the UK no longer has access to that database, so it is harder to prove definitively which other European countries small boat arrivals to the UK have previously passed through.

The UK has not so far struck any bilateral agreements with other EU countries to enable it to replicate the Dublin arrangement.

Instead, officials have labelled many claims where they suspect people have passed through other European countries before reaching the UK as “inadmissible”.

In practice this means many asylum seekers are languishing in the system for extended periods but are not being sent to other countries.

One 19-year-old man from Sudan who is currently in Calais told The Guardian: “We believe we will not be safe unless we can reach the UK.

“Here the French police beat us and evict us every day from the places where we are sleeping outside. It brings back bad memories from Libya where I was locked up and beaten many times by traffickers.

“Because of Brexit I believe that once I reach the UK I will be safe at last. No Dublin, no fingerprints any more.”

Another Kurdish man who gave his name as Navid, and is sleeping in a tent in Dunkirk, said his family had made an arrangement with smugglers to pay for him to cross in a small boat.

“Everyone here is saying to me that because of Brexit it is much easier to find safety in the UK,” he said. “I hope I will manage to cross without losing my life and find a safe future in the UK.”

A Home Office spokesperson said:“The British public have had enough of seeing people die in the Channel while ruthless criminal gangs profit from their misery and our new plan for immigration will fix the broken system which encourages migrants to make this lethal journey.

“People should claim asylum in the first safe country they reach – rather than making dangerous journeys to the UK. That is why we will have rules in place to make asylum claims inadmissible where people have travelled through or have a connection to safe countries.

“There is a global and European migration crisis and countries have a moral responsibility to tackle the issue of illegal migration. We expect our international partners to engage with us to stop people making perilous crossings.”