“You know what these Tories are like. They don’t want protests which is why they are stripping away our rights." 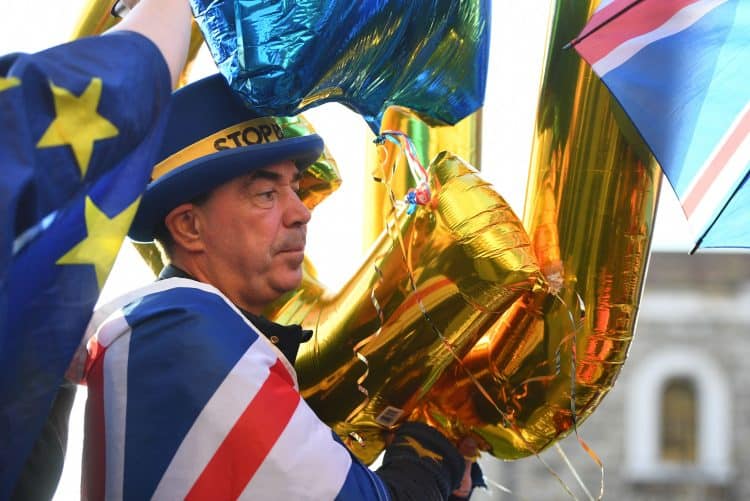 A Conservative MP who called for “Stop Brexit Man” Steve Bray to be thrown in the Tower of London is “griping for any little bit of press coverage”, the serial Westminster protester has said.

Dudley North MP Marco Longhi told the Commons that Mr Bray should be “locked up in the Tower with a loudspeaker playing Land Of Hope And Glory on repeat at maximum volume” because of the disruption he causes.

The MP also claimed that staff in his Westminster office could not hear “distressed constituents on the phone” because of the loud music Mr Bray plays.

Mr Bray hit back, telling the PA news agency: “You know what these Tories are like. They don’t want protests which is why they are stripping away our rights.

“And Marco Longhi and also his best buddy Lee Anderson, they are not happy to see me because they normally try and wind me up but I end up turning it on them.

“Here is the thing about those two – they are going to lose their seats in the next election, so they are just griping for any little bit of press coverage they can get. The less they get the better, to be honest, because they are so insignificant.”

Each Wednesday, the top hat-wearing demonstrator stands on a traffic island outside the Houses of Parliament playing loud music in a protest which coincides with Prime Minister’s Questions.

Before he began using a loudspeaker, Mr Bray was known as the Stop Brexit Man because he used a megaphone to shout “Stop Brexit”.

He has previously attempted to stop senior ministers in the street to speak to them, and has clashed with Conservative MP for Ashfield Lee Anderson.

A Twitter video published by the protester earlier this year showed him following Mr Anderson outside Parliament, with the two exchanging jibes.

Asked if measures in the Police, Crime, Sentencing and Courts Act to curb noisy protests would deter him, Mr Bray said: “Not in the slightest. We will carry on regardless. I don’t care how many times they throw me in prison, we will be back.

“If it happens, it happens, but here is the thing – if you cannot protest democratically and civilly in a democracy, then you may as well go all out, go the whole hog, and if you are going to be sentenced, make it worth it.”

As MPs debated crime and justice measures in the Queen’s Speech, Conservative MP Mr Longhi raised Mr Bray, but would not name him directly in the Commons.

He said: “My staff cannot hear distressed constituents on the phone through the awful racket he causes. All of our staff who have offices in One Parliament Street are caused considerable stress and anxiety by the disruption he causes theirs and our work.

“He needs his loudspeaker system confiscating and needs to be moved on. Personally I’d like to see him locked up in the Tower with a loudspeaker playing Land Of Hope And Glory on repeat at maximum volume.

“The Met Police really should deal with him, he’s causing misery to hundreds of staff and he intimidates many.”

Intervening, Labour’s Lloyd Russell-Moyle (Brighton Kemptown) said: “I disagree with him, I’m happy to swap offices and I’ll take his office. He can have my office and then there’ll be no problem and you don’t need to shut down free speech either. Win-win.”