He told the home secretary to stop discriminating” against Albanians to excuse for her own "policy failures”. 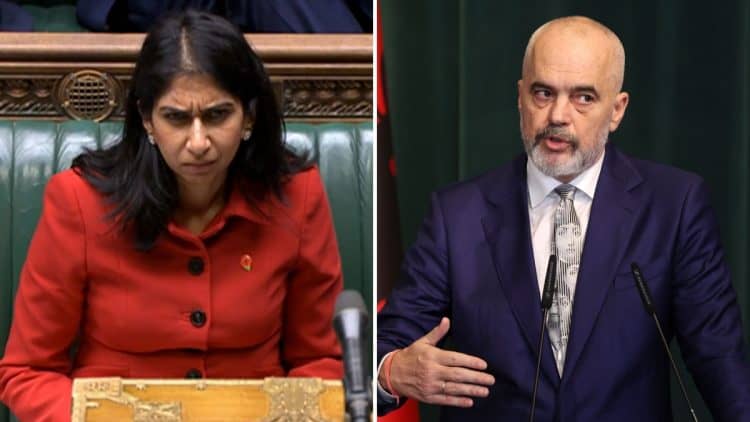 Home Secretary Suella Braverman must stop “discriminating” against Albanians to “excuse policy failures” during the migration crisis, the Albanian prime minister has said.

Edi Rama called for “mutual respect” on Wednesday as he struck out at the “insane” and “easy rhetoric” of targeting his citizens for the UK’s border failures.

The under-fire Home Secretary has frequently singled out Albanian asylum seekers after their numbers crossing the Channel in small boats spiralled.

She has also been considering negotiating a “bespoke route” with the nation to get failed Albanian asylum seekers removed from the UK quicker.

Rama tweeted: “Targeting Albanians (as some shamefully did when fighting for Brexit) as the cause of Britain’s crime and border problems makes for easy rhetoric but ignores hard fact.

Rama argued that 70 per cent of the 140,000 Albanians who have moved to the UK were living in Italy and Greece, while 1,200 of them are business people, and that Albanians in the UK “work hard and pay tax”.

He said the UK should “fight the crime gangs of all nationalities and stop discriminating” against “Albanians to excuse policy failures”.

“Albania is not a rich country and was for a very long time a victim of empires, we never had our own,” Mr Rama continued.

“We have a duty to fight crime at home and are doing so resolutely, as cooperating closely with others too. Ready to work closer with UK but facts are crucial. So is mutual respect.”

Ms Braverman told MPs on Monday the UK has seen a “surge in the number of Albanian arrivals” and said that “many of them I am afraid to say abusing our modern slavery laws”.

She was widely-criticised for her choice of language during the combative Commons debate, during which she claimed there is an “invasion” of England by migrants crossing the Channel.

Ms Braverman agreed with Tory backbencher Lee Anderson who brought up “Albanian criminals” and suggested those who dislike UK accommodation “can get on a dinghy and go straight back to France”.

Last week, MPs were told that 12,000 Albanians had arrived in the UK after crossing the Channel so far this year, compared to 50 in 2020.

Ms Braverman has been facing criticism for the severe overcrowding and poor conditions at the Manston migrant processing facility in Kent and a failure to tackle Channel crossings.

The problems have added to her woes as she continues to face scrutiny over the security breach that saw her lose her job under Liz Truss, before she was reinstated by Rishi Sunak.

Why do bankers get bailouts and tax cuts?