Boris Johnson admitted there is currently "turbulence" in the Anglo-French relationship. 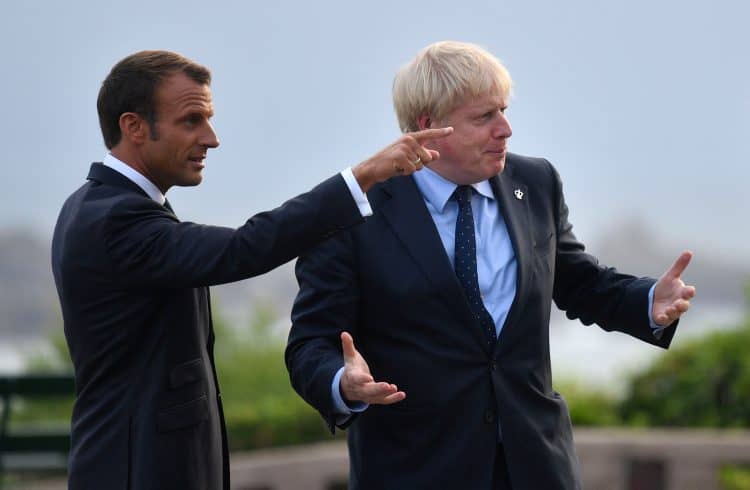 French president Emmanuel Macron has appeared to suggest the UK has not kept its Brexit pledges as a row over fishing rights intensified.

France is threatening to block British boats from its ports and tighten checks on vessels if an issue over a lack of licences for small French vessels to fish in British waters is not resolved by Tuesday.

The UK has said it could retaliate if France carries out its hardline stance.

In an interview with the Financial Times, French leader Macron said the UK’s “credibility” was at stake over the dispute in what will be seen as a reference to the handling of post-Brexit fishing licences.

He told the newspaper: “When you spend years negotiating a treaty and then a few months later you do the opposite of what was decided on the aspects that suit you the least, it is not a big sign of your credibility.”

Castex, according to the newspaper, pressed the European Union to use the “levers at its disposal” and to “make clear…that compliance with the commitments entered into is non-negotiable and that leaving the Union is more damaging than remaining in it”.

Boris Johnson, who admitted there is “turbulence” in Anglo-French relations currently, vowed to do “whatever is necessary to ensure UK interests”.

The Prime Minister said he was “puzzled about what is going on” and claimed Paris’ behaviour could be in contravention of the UK’s Brexit deal with the EU.

Speaking to reporters on the flight to the G20 in Rome, he urged British fishermen to “be confident about going about their lawful business” as he promised action against any infringements on their right to fish.

No 10 said it would not be commenting on Macron’s latest remarks.

It comes as Downing Street separately confirmed that the Prime Minister and Macron will talk on the margins of the G20 this weekend.

The wrangle over fishing access escalated this week after French authorities accused a Scottish-registered scallop dredger of fishing without a licence.

The captain of the Cornelis Gert Jan vessel, understood to be an Irish national, was detained in Le Havre during the diplomatic storm and has been told to face a court hearing in August next year.

French authorities allege the Cornelis Gert Jan did not have a licence, a claim the boat’s owner Macduff Shellfish denies. The EU said UK authorities withdrew the licence on March 1.

Foreign Secretary Liz Truss took the rare step of ordering an allied nation’s envoy to be summoned as she called Catherine Colonna, French ambassador to the UK, to the Foreign Office on Friday afternoon to challenge her over France’s stance.

Colonna’s conversation with Europe minister Wendy Morton lasted less than 15 minutes and she did not speak to the waiting press pack after leaving the Whitehall department.

The Foreign, Commonwealth and Development Office said the minister “expressed concern” to the ambassador over “unjustified measures announced by France earlier this week” and, like the Prime Minister, warned of a possible breach of the Trade and Co-operation Agreement (TCA).

‘Two can play at that game’

The meeting came after ministers promised retaliation if France did not back down over its proposals if next week’s deadline for increased licences is not met.

Brexit minister Lord Frost, in a meeting on Friday with European Commission vice president Maros Sefcovic to discuss the Northern Ireland Protocol, warned of “rigorous” checks on EU vessels if the threats were carried out.

Earlier in the day, Environment Secretary George Eustice did not rule out blocking French vessels as he condemned a “completely inflammatory” claim from France’s Europe minister Clement Beaune that the only language Britain understands is “the language of force”.

Asked by the BBC how the UK would respond if France blocked British trawlers, the Cabinet minister responded: “Two can play at that game.”

At the centre of the dispute are the licences for small boats, which are issued only if the vessels can demonstrate a history of fishing in British waters.

Eustice told MPs on Thursday 171 vessels have been licensed to fish in the UK six to 12 nautical mile zone, of which 103 are French, with 18 under 12 metres.