The monarch will carry out the key duty at her private Scottish retreat, rather than at Buckingham Palace, for the first time in her reign. 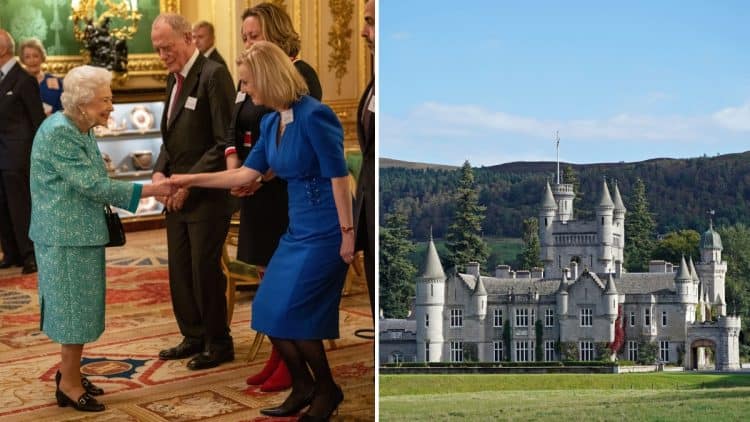 Liz Truss will travel to the Scottish Highlands to meet the Queen on Tuesday at Balmoral Castle, where she will be asked to form a government and become prime minister.

The historic audience will be the first time the 96-year-old monarch, who has faced ongoing mobility issues, has carried out the key duty at her retreat in Aberdeenshire, rather than at Buckingham Palace – or WFH, as the kids call it.

Ms Truss, 47, will become the third female prime minister in British history – following in the footsteps of Margaret Thatcher and Theresa May – with all three serving during the Queen’s 70 years on the throne.

Truss is no Royalist

But new Conservative Party leader Ms Truss, who will become the Queen’s 15th PM, has, in the past, called for the monarchy to be abolished.

As a 19-year-old student addressing the 1994 Liberal Democrat conference, she declared “We do not believe people are born to rule” and said she had canvassed opinion from the public who told her “Abolish them, we’ve had enough”.

Ms Truss, who has since said her political ideas developed as she grew up, said the Queen was “far too polite” to bring up her previous stance when they met previously.

“I’ve already met the Queen and she’s been far too polite to raise that issue with me,” she said during a Sky News debate in August.

Asked whether she would apologise if the Queen did mention it, Ms Truss said: “Well, I was wrong to say what I did at the time.”

Asked by the BBC’s Nick Robinson about her previous comments, she said she was a “professional controversialist” in her youth and “liked exploring ideas and stirring things up”.

But she added: “I began to understand more about why Britain is successful, and part of our success is the constitutional monarchy that supports a free democracy.”

The Queen and Ms Truss have encountered each other on a number of occasions, including at Windsor Castle last October.

As foreign secretary, Ms Truss met the monarch when the Queen greeted a line-up of guests at a Global Investment Summit reception for billionaire business leaders, politicians and tech entrepreneurs.

Ms Truss shook the Queen’s hand, and appeared from the photographs to have performed a small curtsy.

The pair have also met at Privy Council meetings, with Ms Truss having “kissed hands upon appointment and received the Seals of Office” for each of her Cabinet roles.

She became a Privy Counsellor for the first time in 2014 as environment secretary.

They are both Elizabeths – yet while it is the Queen’s first name (as Elizabeth Alexandra Mary), it is actually Ms Truss’s middle name and her first is a similarly-regal Mary, which she has never used.

Balmoral is the Queen’s personal and private property which Queen Victoria and Prince Albert made their Scottish home in the early 1850s.

For the Queen, the estate is associated with happy family holidays and she traditionally spends around eight to 10 weeks, during August, September and early October at her much-loved home, where the royals traditionally enjoy walks, barbecues and outdoor life.

The audience will take place in Balmoral’s green-carpeted Drawing Room, which has matching green sofas, a leaf-patterned fabric chair, an open fire and a number of equine-themed antique paintings on the walls.

It will follow Boris Johnson’s audience with the Queen, during which he will tender his resignation as PM.

How to Make: Chinese Chicken Dumplings