The prime minister announced just one new policy in a waffling 44-minute address in Manchester. 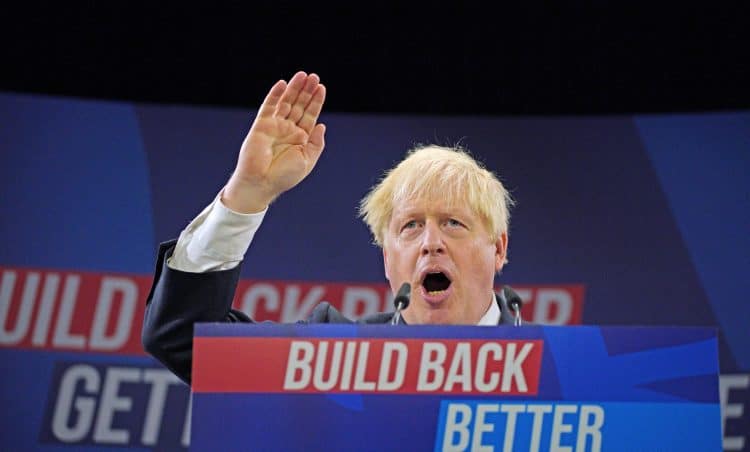 Boris Johnson vowed to “build back burger” in a waffling conference speech packed with awkward jokes – and just one new policy.

The prime minister used his Conservative Party conference speech to say he has the “guts” to reshape society, addressing issues which had been dodged by previous administrations.

With shortages of lorry drivers and other workers hitting supply chains, leading to empty shelves and queues at petrol stations – all of which were ignored in his 44-minute speech – Johnson defended his strategy of restricting the supply of cheap foreign labour after Brexit.

And despite a looming National Insurance rise for millions of workers in April to fund a £12 billion annual investment in health and social care, Johnson insisted his new approach would ultimately create a “low-tax economy”.

“That’s the direction in which the country is going now – towards a high-wage, high-skilled, high-productivity and, yes, thereby a low-tax economy. That is what the people of this country need and deserve.

“Yes, it will take time, and sometimes it will be difficult, but that is the change that people voted for in 2016.”

“She would have wagged her finger and said: ‘More borrowing now is just higher interest rates, and even higher taxes later.’”

Above all else, the speech threw red meat to a delighted audience of Tory activists, as the prime minister cracked jokes about clubbing cabinet ministers and joked about reintroducing beavers and otters to the wild.

Touting the benefits of rewilding, Johnson joked: “If that isn’t Conservative, my friends, I don’t know what is – build back beaver, I say,” he said.

“Though the beavers may sometimes build without local authority permission, you can also see how much room there is to build the homes that young families need in this country.

“There is no happiness like taking a set of keys and knowing the place is yours, and you can paint the front door any colour you like.

“As it happens I can’t paint my own front door any colour I like – it has to be black – but I certainly don’t have to go far to work.”

He also touted a recent agreement with the US to import British beef, yelling: “Build back burger, I say.”

And he dismissed critics of the submarine pact signed with Washington and Australia as “a certain raucous sqwuakus from the anti-Aukus caucus”.

The single policy announcement in the speech was a “levelling-up premium” worth up to £3,000 to encourage science and maths teachers to go and work in disadvantaged areas.

But there was no mention of the cut to the £20-per-week Universal Credit uplift, which came into force on the morning of the speech.

Instead, Johnson sought to spell out what his “levelling-up” agenda means.

“The idea in a nutshell is you will find talent, genius, care, imagination and enthusiasm everywhere in this country, all of them evenly distributed – but opportunity is not,” he said.

“Our mission as Conservatives is to promote opportunity with every tool we have.”

‘More of the same’

“The prime minister has set out a compelling vision for our economy. High wages, high skills, high investment and high growth,” he said. “But the PM has only stated his ambition on wages. This needs to be backed up by action on skills, on investment and on productivity.

“Ambition on wages without action on investment and productivity is ultimately just a pathway for higher prices.”

And the progressive IPPR think-tank said Johnson was right to say the economic model is broken – but criticised his speech for offering no solutions to deal with its underlying weaknesses.

Carys Roberts, IPPR executive director, said: “The prime minister promised to break with the past, but with today’s £20 Universal Credit cut we are seeing more of the same.

“To truly turn our back on the UK’s broken economic model, the prime minister should have announced a transformative economic agenda.

“Reaching net zero and levelling up are vital missions that the UK can use as central pillars of this, but on both we are still left waiting for crucial policy detail.”

Related: Boris Johnson told to ‘stop talking’ by BBC after rambling and waffling