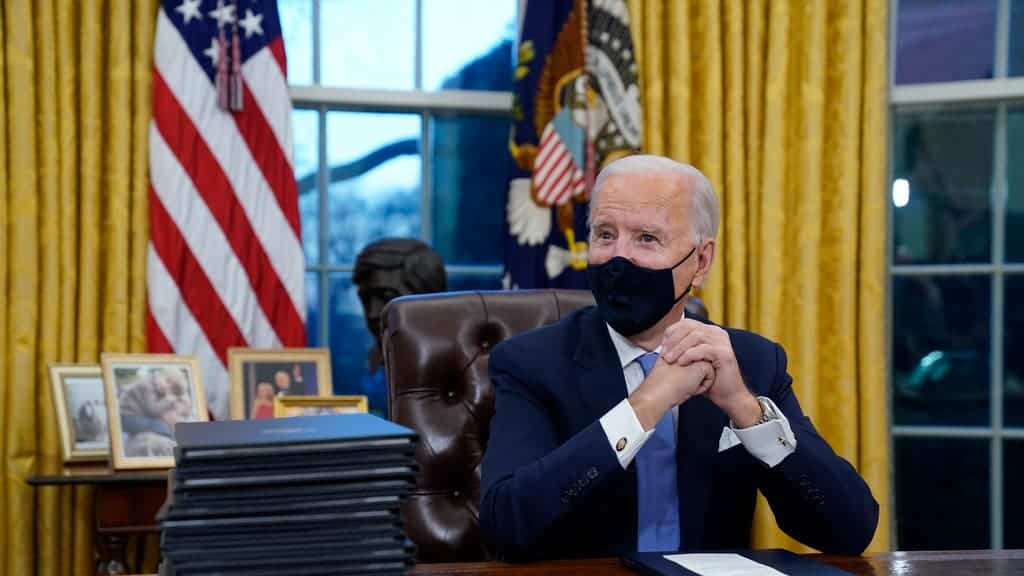 Joe Biden has signed a series of executive orders from the Oval Office hours after his inauguration as the 46th president of the United States.

Mr Biden, wearing a face mask, said there was “no time to start like today” while seated behind the Resolute Desk with a pile of executive orders.

The first order Mr Biden signed was related to the coronavirus pandemic. He also signed an order re-entering the US into the Paris climate accord.

Biden has already signed 17 executive orders. in 5 hours, we've rejoined the Paris Agreement, canceled Keystone XL, ceased withdrawal from the WHO, required non-citizens to be included in the Census, reversed the Muslim ban, AND added LGBTQ employment discrimination protection pic.twitter.com/U95MEAojC2

While his predecessor Donald Trump broke long-standing practice by skipping Mr Biden’s inauguration, he did follow through on one tradition and left behind a letter for the new president.

Mr Biden said Mr Trump “wrote a very generous letter” but added that he would not reveal its contents until he had a chance to speak with his predecessor.

Earlier, Mr Biden declared that “democracy has prevailed” after he was sworn in as president.

Mr Biden took the oath of office at a US Capitol that had been battered by an insurrectionist siege just two weeks earlier. On a cold Washington morning dotted with snow flurries, the quadrennial ceremony unfolded amid tight security and devoid of crowds because of the coronavirus pandemic.

“The will of the people has been heard”

Instead, Mr Biden gazed out over 200,000 US flags planted on the National Mall to symbolise those who could not attend in person.

“At this hour, my friends, democracy has prevailed. This is America’s day. This is democracy’s day. A day in history and hope, of renewal and resolve.”

History was made at his side, as Kamala Harris became the first woman to be vice president. The former US senator from California is also the first black person and the first person of South Asian descent elected to the vice presidency and the highest-ranking woman ever to serve in the US government.

“Lies told for power and profit”

Mr Biden never mentioned his predecessor, who defied tradition and left town ahead of the ceremony, but his speech was an implicit rebuke of Mr Trump. The new president denounced “lies told for power and for profit” and was blunt about the challenges ahead.

Central among them is the surging virus that has claimed more than 400,000 lives in the United States, as well as economic strains and a national reckoning over race.

Biden said: “We have much to do in this winter of peril, and significant possibilities. Much to repair, much to restore, much to heal, much to build and much to gain. Few people in our nation’s history have been more challenged, or found a time more challenging or difficult than the time we’re in now.”

Mr Biden was eager to get a lot done early, with an ambitious first 100 days including a push to speed up the distribution of Covid-19 vaccinations to anxious Americans and pass a 1.9 trillion dollar (£1.4 trillion) economic relief package.

There is no time to waste when it comes to tackling the crises we face. That's why today, I am heading to the Oval Office to get right to work delivering bold action and immediate relief for American families.

On his first day, as part of a push to roll back Trump administration initiatives, he signed a series of executive actions, including to mandate mask wearing on federal property.

The absence of Mr Biden’s predecessor from the inaugural ceremony underscored the national rift to be healed.

But a bipartisan trio of former presidents — Bill Clinton, George W Bush and Barack Obama — were there to witness the ceremonial transfer of power. Mr Trump, awaiting his second impeachment trial, was at his Florida resort by the time the swearing-in took place.

Mr Biden, in his third run for the presidency, staked his candidacy less on any distinctive political ideology than on galvanising a broad coalition of voters around the notion that Mr Trump posed an existential threat to American democracy. Four years after Mr Trump’s “American Carnage” speech painted a dark portrait of national decay, Mr Biden warned that the fabric of the nation’s democracy was tearing but expressed faith that it could be repaired.

Mr Biden said: “I know the forces that divide us are deep and they are real. But I also know they are not new. Our history has been a constant struggle between the American ideal that we are all created equal and the harsh, ugly reality that racism, nativism, fear, demonisation have long torn us apart.

“This is our historic moment of crisis and challenge, and unity is the path forward and we must meet this moment as the United States of America.”