Once you see it you can't unsee it, as Rishi Sunak and Margaret Thatcher's faces are merged into a Tory leadership horrifying mess... 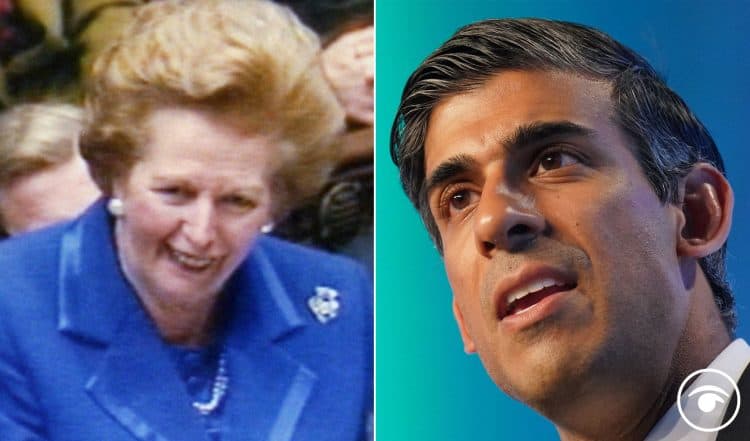 Liz Truss has denied modelling herself on Margaret Thatcher, saying such comparisons are “frustrating”.

The comparisons have come thick-and-fast in recent years, especially since the elevation of Ms Truss to the high-profile position of Foreign Secretary.

Some have suggested the comparisons have not been unwelcome to Ms Truss, pointing to some of her own eye-catching photo opportunities.

Have a look at these pictures and get back to us…

Not to be outdone Rishi Sunak has also turned to the legacy of the Iron Lady and vowed to demonstrate his “common-sense” Thatcherite credentials.

Speaking to the Telegraph, Mr Sunak said: “Inflation is the enemy that makes everybody poorer.

“And if we don’t act to tackle inflation now, it’s going to cost families more in the long run, especially on their mortgage rates.

“So that’s what I’ll be focused on dealing with.”

The ex-Chancellor added: “But we will cut taxes, as I said, and we will do it responsibly.

“That’s my economic approach. I would describe it as common-sense Thatcherism.

So the cheeky lot at The Poke have merged Sunak’s and Thatcher’s face and it really is something!

They wrote: “After learning Liz Truss is the favourite to win the leadership contest, Rishi Sunak adopts on her strategies.”

Related: What do Thatcher and Truss have in common? A fondness for Jimmy Savile for one