Protesters gathered outside of the Home Office to urge ministers not to “leave anyone behind”. 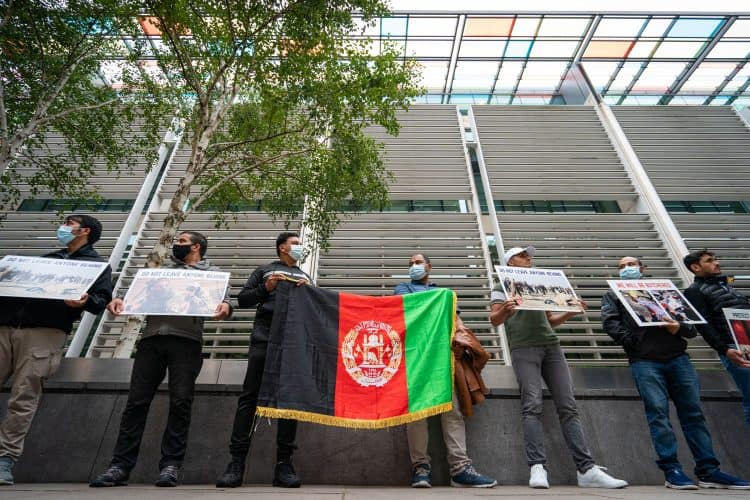 Former interpreters have pleaded for “humanity” from the government to help evacuate their families from Afghanistan before 31 August, amid fears they will face danger from the Taliban.

Some 40 protesters gathered outside of the Home Office in central London on Monday to urge ministers not to “leave anyone behind” ahead of the Kabul evacuation deadline, when US troops are set to withdraw.

The demonstrators held placards saying the government had a “moral obligation” to protect Afghan allies, while others held photos showing graphic images of deaths across 20 years of conflict with the Taliban.

One interpreter said: “It’s humanity. We help each other. We welcome each other. There is no future in Afghanistan.”

‘My family is in danger’

Mohammed Zaheer, a former interpreter who came to the UK in 2015, said the situation in Afghanistan was a “disaster” which he never believed would happen.

He said: “There is no bright future. There is nothing to do. We worked with the army and now my family is in danger.”

Zaheer added he is worried for his brother in Afghanistan who “cannot even go to the market” as he worked with the US Government-led PRT (Provincial Reconstruction Team) for only a few months.

“They won’t be able to talk to me – Facebook, everything will go,” he said. “It’s not just my family – everyone here is asking the British Government to think about our families and bring them here.”

Rafi Hottak, one of the organisers of the protest who worked with British soldiers from early 2006 to 2011, called on the Government to offer a “proper procedure for people like us who have served in Nato forces with all our honesty and integrity”.

He said: “We know the Americans handed over the Afghan government to the terrorist group that we started fighting 20 years ago. However, they did not put measures right or pull out properly.

“There is no procedure to help those who helped them in the past 20 years.”

‘Our lives are at risk’

Hottak said that he heard from a number of British citizens who have faced horrors while stuck in Afghanistan, while his brother was injured when he fell off the wall at Kabul airport while trying to flee.

“Our lives and families are at risk,” he said. “Since the collapse of Kabul it has been difficult for all those who qualify for evacuation to get through the main door to the front gate where they should be evacuated or taken into the airport.

“The UK and American government knew what was happening. They could have, if they wanted to, put the right measures in place and those who were going to be prioritised could have had a channel from which they could have escaped.”

Hottak added: “We fear for ourselves. How can I go to the Taliban and say that I’m an interpreter? It will put us straight into their hands. The UK government needs a proper plan with safety measures.”

Ismatullah Nabizada, a former interpreter who came to the UK through the relocation scheme in 2016, said he is still in touch with his family, but the lack of clarity has meant that “everyone is scared” while trying to get in touch with the embassy.

Nabizada said: “Our country is taken over by the Taliban – we don’t know what’s happening in the future.

“You still can’t believe it – it’s unbelievable. Sometimes I think it’s a dream. It’s a shock, even for us.”