By Roger Cottrell, PhD Russian financial interests funding the Conservative Party, to a sum in excess of £800 000, may be directly linked to the manipulation of Britain’s Brexit vote and to the funding of Europe’s fascist Right. Core to this nefarious connection are the links between Aggregate IQ (AIQ), Cambridge Analytica (CA) and […] 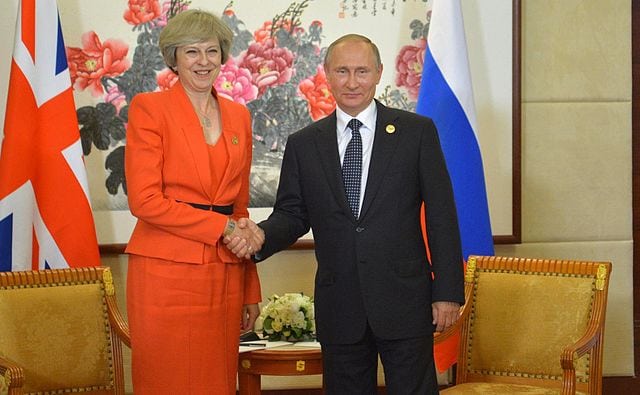 Russian financial interests funding the Conservative Party, to a sum in excess of £800 000, may be directly linked to the manipulation of Britain’s Brexit vote and to the funding of Europe’s fascist Right.

Core to this nefarious connection are the links between Aggregate IQ (AIQ), Cambridge Analytica (CA) and Strategic Communications Laboratories (SCL), recently exposed in a joint report by Channel 4 News, The Observer and The New York Times.

Facebook has just banned AIQ after evidence that emerged last week has linked it to Cambridge Analytica and the stolen personal data of Facebook users.

But Facebook have suspended them after documents linking them have emerged, stating: “in light of recent reports that AggregateIQ may be affiliated with SCL and may, as a result, have improperly received FB user data, we have added them to the list of entities we have suspended from our platform while we investigate.”

A third of all Vote Leave’s official spending went on AIQ, apparently topped up by payments from BeLeave, Veterans for Britain and the DUP.

The electoral commission is reinvestigating the leave campaign’s spending, after Vote Leave volunteer Shahmir Sanni has blown the whistle on how the Leave campaign broke election spending rules to funnel funding to the shadowy organization.

He has paid a price for it. Theresa May’s special adviser Vote Leave’s Stephen Parkinson shamefully outed the whistleblower’s sexuality as part of an attempt to distract from his serious allegations. Yet Number 10 has stood by Parkinson and there have been no repercussions for his despicable behaviour.

What’s more, Dominic Cummings the Vote Leave campaign, in a statement that once appeared on Aggregate IQ’s website but has now been deleted insisted “We couldn’t have done it without them.”

Europe needs to also face up to the threat that the Kremlin, and elements of the Russian Mafia and oligarchs that Putin represents, have deliberately funded extreme right wing and Eurosceptic causes in order to weaken the European Union.

This is in order to consolidate Russian domination of Europe’s gas and oil industries, which has also been a motive behind Russian war crimes in Chechnya, Crimea and Donbas.

If this is true then Cambridge Analytica’s parent company Strategic Communications Laboratories, whose shareholders have also financed the Tory Party to the tune of hundreds of thousands, and whose executives now hold key positions in Theresa May’s government, have directly colluded with a hostile power against the national interest of Britain and other European States.

All this using algorithms developed by CA and more than 50 million Facebook accounts harvested by them. The social media company now admit that as many as 87 million people may have been affected.

These disclosures come as Roger Gabb who has significant control over SCL Group is revealed to be the biggest Tory Party donor in history.

Indeed, since 2004, Gabb who was fined for illegal pro Leave adverts during the EU referendum, donated a total of £707,000 to the Conservatives.

Gabb made massive donations to the Tories when David Cameron’s government were deciding to hold the Brexit referendum in the first place.

The Brexit vote has been recognised by figures such as Doreen Lawrence, mother of murdered teenager Stephen Lawrence, as being a catalyst to resurgence of racism and division in the UK.

Prigozhin in turn bankrolls the Internet Research Agency, to a tune of £1.25 million.  Based in St Petersburg, this is the troll farm which mass produces right wing, anti-EU, pro-Russia propaganda on issues such as immigration that is then disseminated on social media.

During the Brexit vote, as during the Trump vote in the US, Cambridge Analytica was headed by Steve Bannon.

All this while Prigozhin’s Internet Research Agency was spreading propaganda on social media to influence the electoral process.

Prigozhin’s private army, Wagner, is meantime involved in war crimes in the Crimea, Donbas and Syria.

This in itself suggests a strategic connection between Putin’s support for Europe’s extreme right, his war crimes in the Crimea, Donbas and Syria, and efforts to control Europe’s gas and oil markets through the contrived destruction of the EU.

On March 16, 2018, as the extent of SCL’s connection to the Tory Party began to be revealed and raids on SCL’s offices in Mayfair were being prepared, the company reconstituted itself as Emerdata, Ltd.

This was shortly after Kremlin funding to the nationalist, ultra right Eurosceptic Alternative for Germany and Marine Le Pen’s Front National, via the First Czech Russian Bank was exposed by BBC’s Panorama.

In a video now deleted from Bannon’s far right, divisive fake news Breitbart website, Farage thanks the former Donald Trump chief strategist and his Breitbart website for their invaluable help with securing the Brexit vote in the EU rerefendum.

No wonder Steve Bannon, addressing Marine Le Pen’s power base in Nice told his movement that their moment has come.

The threat to our national security

Once again, Russia’s ambitions in the Crimean goes to the heart of Putin’s objective to dominate the European gas and oil market following the weakening of the EU. This also explains his financial support to European fascist parties, via the First Czech Russian Bank, as well as the uninterrupted platforms offered to Alternative for Germany and the Front National on Russia Today.

There are other connections between oligarchs in the Russian energy sector and the far right.

As an example, Aleksander Kogan the Cambridge University academic who harvested Facebook users’ data that went to Cambridge Analytica also used a personality quiz to pull Facebook data via its API in St Petersburg in summer 2014. The Russian oil giant Lukoil was talking to Cambridge Analytica about such work around the time it was purchased by Robert Mercers (through SCL) in 2014.

Lukoil is currently in a strategic cooperation agreement with Gazprom, which is scheduled to last between 2014 and 2024, on oil and gas production in the Caspian Sea.  This in turn gives it a strategic interest in conflicts in Chechnya and Crimea, which is linked to Putin’s objective to dominate the European gas and oil market.

It has additionally led to deals with the Macron government which may explain its initial reluctance, along with that of Donald Trump, to explicitly condemn Putin over the poisonings in Salisbury.

The economic and geo-strategic objective of the Putin government to dominate Europe’s gas and oil industry goes to the heart of its divide and rule support for European right-wing movements and Brexit.

It is time we all recognised this as the threat to national security that it is.