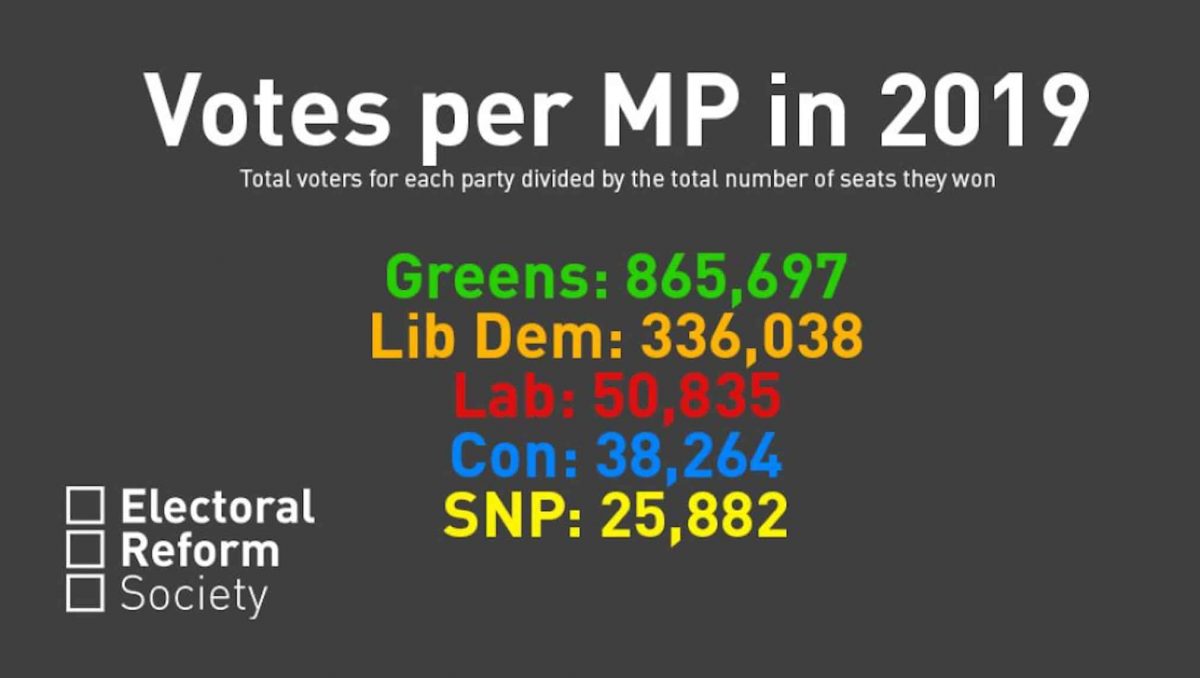 Millions of voters unrepresented. An unjust majority on a minority of the vote. And nearly one in three forced to vote ‘tactically’.

We’ve been crunching the numbers and found some stark results. For example. we analysed the number of votes needed per MP elected.

Across Britain, it took…

Overall, 45.3% of votes went unrepresented – i.e. the people in each area who did not vote for the winning MP.

Across the country, it meant millions of votes for parties went to waste – with some parties’ support much more spread out than others.

Under proportional systems like the Single Transferable Vote, these unrepresented votes would be redistributed to voters’ other choices instead. But under one-person-takes-all voting, those voters are effectively silenced.

The Conservatives have won a majority on a minority of the vote, with an increase in seat share high above their increase in vote share.

The SNP have also been highly over-represented, while Liberal Democrat voters have been short changed. Thankfully both these parties support a fair, proportional voting system.

People will not tolerate being systematically ignored. This has to be the last election under Westminster’s warped voting system

As Electoral Reform Society (ERS) Senior Director Willie Sullivan noted, the two big parties cannot rest on their laurels: “The Conservatives must recognise they were helped by the Brexit Party standing down in their existing seats, while Labour must recognise that tactical voting under Westminster’s voting system did not save them.”

Trust in politics is at rock bottom. It’s no wonder why.

It is time for real reform to end the mass disenfranchisement we see under First Past the Post. Together, we can build a better democracy.

The ERS has launched a petition to introduce proportional representation.

We don’t have to accept the broken system as it is. Sign our petition, and join the movement for real democracy.

You can view the full findings on our Results Hub here