McDonnell said that while “Jeremy was the right leader”, it is time for the party to “move on” under new leadership. 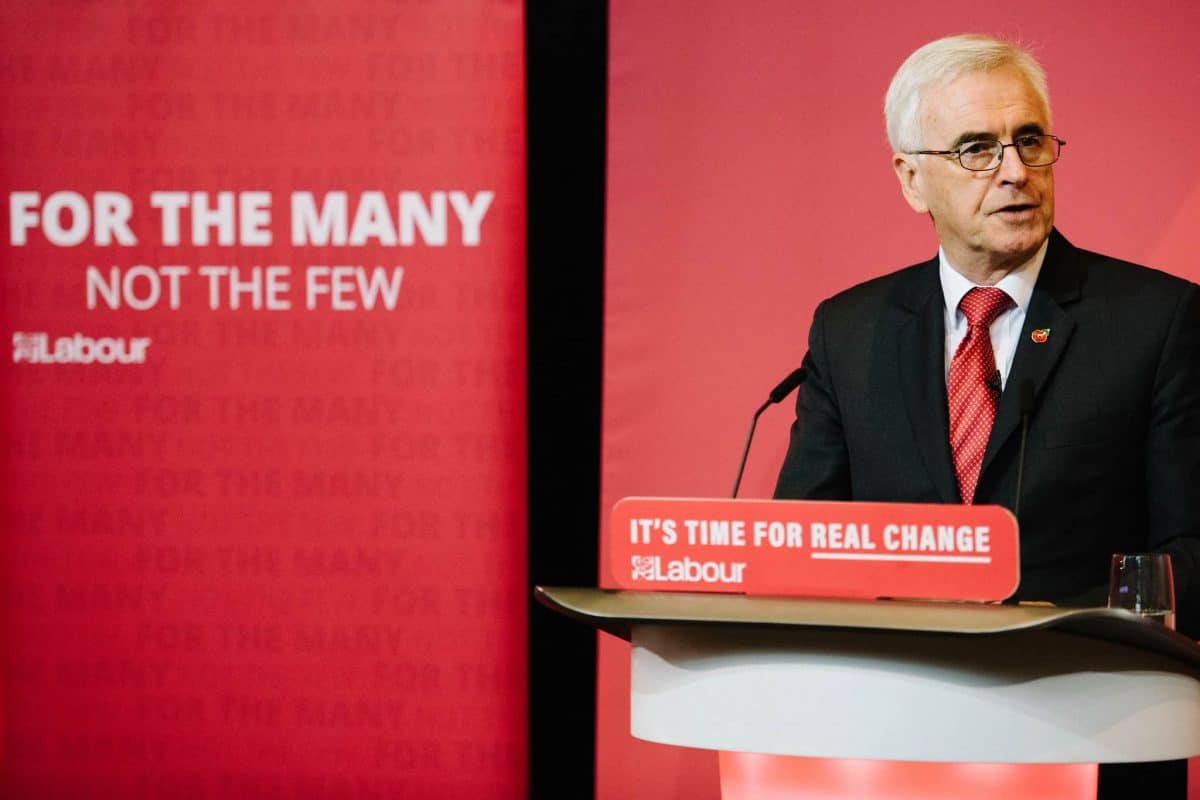 John McDonnell has confirmed he will not be part of Labour’s next shadow cabinet following the party’s major defeat in Thursday’s election.

The shadow chancellor played a prominent role in Labour’s election campaign and politics over the past five years. Shadow chancellor since 2015, McDonnell pledged to increase spending on infrastructure and research, describing his vision for the economy as “socialism with an iPad”

Mr McDonnell added that while “Jeremy was the right leader”, it is time for the party to “move on” under new leadership. “We will all go now. The new leader will come in place and appoint a shadow cabinet. I won’t be part of the shadow cabinet. I’ve done my bit. We need to move on at that stage with that new leader,” he told reporters, effectively ruling himself out of the running for the next party leader. Jeremy Corbyn has indicated he will stand down as Labour leader in the early part of next year.

John McDonnell, who retained the Hayes and Harlington seat he has held since 1997 in Thursday’s election, joined the conclusion of many, saying that Jeremy Corbyn had been “demonised by a smear campaign against him” by the media.

“No. I didn’t back the wrong person because Jeremy was the right leader. We could have won in 2017. Things moved on. Brexit dominated everything,” he said.

Asked if Mr Corbyn was the reason for the party’s defeat, he added: “I think there is an issue to be discussed about how the use of the social media – but also the overall media – has turned someone who I think is one of the most principled, honest, sincere, committed anti-racist politicians demonised by a smear campaign against him.”

Responding to a disastrous night for Labour, Mr Corbyn said he would not be leading the party into another general election. Speaking about the timetable for him to leave, Mr Corbyn said: “The National Executive will have to meet, of course, in the very near future and it is up to them. It will be in the early part of next year.”

He also added that Brexit was not the only reason for Labour’s significant defeat.

“I think it wasn’t just Brexit. I think a long history of maybe 40 years of neglect and them saying to politicians ‘you never listen to us and you have allowed our community to run down in this way’.

“I am hoping that will enable us to construct a programme to address those issues, but it has got to be from the grassroots and community upwards,” he said.

A senior source close to Mr McDonnell, who has been shadow chancellor since 2015, said: “John will stay in place until a new leader and new frontbench team is in place.”

The election saw Labour swept aside by the Conservatives in its heartlands in the Midlands, north Wales and north-eastern England, with Jeremy Corbyn’s party securing the fewest number of seats since 1935.

Who is likely to replace Jeremy Corbyn as Labour leader?

Positioning in the race to become the next Labour leader has already started, with David Lammy confirming he was considering putting his name forward.

Others being touted to take over include Lisa Nandy, who represents Leave-voting Wigan.

Emily Thornberry, shadow foreign secretary, has deputised for Mr Corbyn at Prime Minister’s Questions, has always been fiercely loyal to the Labour leader and the party and is perceived as one of the front runners should an election contest be called.

Sir Keir Starmer is another member of the shadow cabinet tipped to replace Mr Corbyn.

Jess Phillips has made no secret of her ambitions and would signal a big departure from Corbyn’’s influence on the party.

How is a leadership contest triggered?

Mr Corbyn has said it is for the party’s ruling National Executive Committee (NEC) to set the timetable for a leadership contest, expected to be some time in early 2020.

The Labour Party rule book states that if the party leader is no longer available, the deputy leader automatically becomes leader on a temporary basis.

The NEC would then decide whether to hold an immediate postal ballot for a new leader, or to wait until the next party conference.

But as deputy leader Tom Watson stepped down shortly before the election was called – and so both leader and deputy are unavailable – the NEC then conducts a postal ballot of Labour membership to select a new leader.

In the interim period, the NEC may appoint a temporary leader.

How can someone be nominated for Labour leader?

Affiliate groups are organisations such as trade unions or socialist societies.

Who can vote for the new Labour leader?

Members of the Labour Party, affiliated trade unions and registered supporters are able to vote in a leadership contest.

The party has used a one-person-one-vote system since 2015. In the postal ballot voters rank candidates in order of preference and, if more than half of voters have the same favoured candidate, they are elected.

If there is no overall winner, the candidate who came last is removed and votes are redistributed to the voters’ next preference, repeating the process until a winner is produced.

READ MORE: ‘From the three proudest sons on the planet, please continue the fight’ – stirring open letter and plea from Jeremy Corbyn’s sons