A look back at The Telegraph's coverage of the Covid-19 pandemic - and how it influenced No. 10. 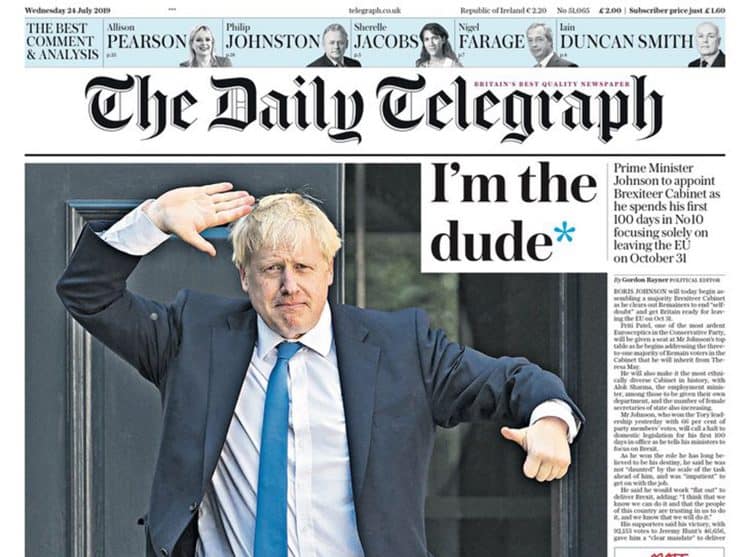 Who is Boris Johnson’s real boss?

The man at the top of the tree is supposed to be all-powerful, acting on the wishes of the electorate and taking decisions that are in the best interest of the country.

But as the recent Covid-19 pandemic showed, that is a far cry from the reality of the situation, which is becoming increasingly convoluted.

According to Washington University’s Institute for Health Metrics and Evaluation, by May the actual UK Covid-related death toll was over 209,000, not the 154,000 officially reported. The reasons include the Johnson administration’s refusal to lock the country down early. He explained from the outset (February last year) that protecting “the economy” (read: profits) was his priority.

Johnson’s former aid/Svengali, Dominic Cummings, recently alleged that Johnson calls his former employer, the Daily Telegraph, his “real boss.” When asked if that was a joke, Cummings said: “It’s often hard to tell with the prime minister.” Cummings opined that the Telegraph—or Torygraph, as many call it—pushed for a pseudoscientific version of herd immunity that let the virus rip through the country.

Where is the evidence for such a claim? For one thing, an Institute for Government report from over a decade ago noted the entrenched Whitehall culture that makes politicians susceptible to propaganda. “Ministers may be influenced by the media, even when it is unclear that the media is influencing the public.”

For another, we can cite the newspaper’s boast. The Telegraph’s owners, Frederick Barclay and his late brother David, were Brexiteers. Many allege that they saw Britain’s exit from the EU as a chance to streamline their well-known, legal tax avoidances. After Britain’s disastrous departure, the newspaper bragged of how it “stood up to the establishment elite to reflect and push forward the views of the silent majority.”

Let’s take a look at the Telegraph’s COVID coverage and see if it correlates to government policy.

Severe Acute Respiratory Syndrome (SARS) is a coronavirus that broke out in Asia in 2003, spreading via international travellers to more than 20 countries. Over 8,000 people became infected and 774 died. Compared to COVID, SARS was thankfully neither highly contagious nor very lethal. Unlike COVID, spread was quickly contained.

It could be argued that some of the Telegraph’s early reporting minimised the seriousness of COVID. “[C]ould it be the next Sars?”, asked one article, grossly underestimating the severity of the virus.

Other reports were more aware of the seriousness, but appear to have put the blame on the Chinese government’s failure to contain the initial outbreak. There were “at least 4,000 people infected with coronavirus and cases could reach UK.” Early coverage focused on infringements of civil liberties, such as plans to force British people to stay in Wuhan or leave their spouses/partners behind.

The senior editors quoted the opinion of Sir Arthur Newsholme, the First World War-era public health official: “carry on… even when risk to health and life is involved.” The editors opined: “all we can do is prepare, wash our hands and wait.” Their position was anti-lockdown from the start. National restrictions “would affect everybody’s lives whether they fell sick or not: broken supply chains, lost orders, closed schools, people isolated in their own homes.”

If Cummings’s claim is true, it could be argued that the Telegraph was pleased with Johnson’s initial anti-lockdown approach and that it published op-eds to encourage him to continue on that path. In an article that didn’t age well, Asa Bennett wrote that “the UK has been faring better than its European neighbours in the fight against the coronavirus, with Mr Johnson and his colleagues displaying the firmness and calm expected by the public.”

On the eve of the first lockdown in mid-March, the newspaper continued to oppose nationwide restrictions. It selectively quoted the opinions of lockdown-sceptical or lockdown-cautious experts, including Francois Balloux, UCL’s Professor of computational biology, who describes lockdowns as “blunt, discriminatory and moderately effective measures that democratic societies should only consider in absolute last-resort.” (A reminder: New Zealand locked down hard and fast and has 26 COVID-related deaths. Britain has an official toll of 154k and a likely real toll of 209k.)

In a series of tweets, Balloux wrote: “there is no such thing as a choice between managing the pandemic vs. protecting the economy … If the covid-19 pandemic leads to a global economy collapse (sic), many more lives will be lost than covid-19 would ever be able to claim.” (A reminder: by the end of 2020, New Zealand’s economy had actually grown whereas Britain’s remained below first- and second-quarter levels.)

The Telegraph also quoted Michael Tildesley, an Associate Professor of infectious disease modelling at Warwick University. Tildesley has worked on the DHSC’s Scientific Pandemic Influenza Group on Modelling. At the start, he claimed that COVID-relate mortality was unknown. “[I]f the number of mild, undetected, cases is high, then the true mortality rate is significantly lower than one [that] has been reported.” In reality, The Lancet had already worked out that case-rate fatalities were 1.3 percent: or <600k UK deaths if no measures were taken (assuming 70 percent of the population became infected).

One month into the lockdown, headlines gave the impression that restrictions would never end, suggesting that the public were getting fed up: “The truth about the Government’s exit strategy is that there isn’t one” (Fraser Nelson) and “No end in sight for coronavirus lockdown” (Gordon Rayner). But more than half the public (56 percent to 39) thought that lockdown had been imposed too late.

As it became clear that the left had the correct COVID policy all along, the Telegraph sought to denigrate the achievements of New Zealand’s government. With the headline, “New Zealand is no lockdown success story,” Ross Clark wrote: “A densely-populated country at the heart of international commerce,” meaning the UK, “was always going to be more deeply affected than a country out on a limb in the southern ocean, 1000 miles from any other landmass.”

The government’s planned July 2020 reopening included regional lockdowns. The Telegraph responded with: “Leicester becomes first British city to have draconian lockdown measures reimposed.” The editors, citing the predicted rise in cases in the autumn of that year, concluded: “That may well happen. However, that is not a legitimate argument for remaining in perpetual quarantine, but for coming up with practical ideas for dealing with it.”

Correlation is not causation, so it is hard to say for sure whether or not Johnson’s “real boss” delayed lockdown and quickened the reopening. There is, however, some direct evidence of influencing policy.

In October last year, a group of scientists, some of them backed by Tory-supporting billionaires, issued the Barrington Group Declaration calling for “herd immunity” and the end of lockdowns. The fringe scientists gave the newspaper’s anti-lockdown agenda a veneer of credibility. On 6th October, it promoted the Group’s “Focused Protection” hypothesis: to somehow unlock the least at risk. On 10th, the paper published the opinion of Barrington signatory, Professor David Livermore of East Anglia University: “Protect the elderly, but let’s see life back to normal for those at low risk.”

Johnson’s leaked WhatsApp message from the period included his dismissals that the NHS could be overwhelmed and that younger people could sicken. The Independent revealed that Johnson’s claims “were made virtually word-for-word in a comment piece published just a few days before in the [Telegraph,] … which until recently paid Mr Johnson £275,000 a year” as lead-writer. “Chickenfeed,” as Johnson once described his salary.

Johnson’s avarice (“vaccine success is because of capitalism, because of greed”) and lack of empathy (“let the bodies pile high in their thousands”) set the scene for a tragedy of epic proportions. His former employer kept up the pressure to ensure he did not crack and impose national restrictions. How much worse would it have been had the Telegraph fully succeeded, assuming that what Cummings says is true?

Related: What happened to the supposed saviours of liberalism?