BAFTA-winning actress Joanna Lumley asks 'we pride ourselves on being a nation of animal lovers – but is this really true?' 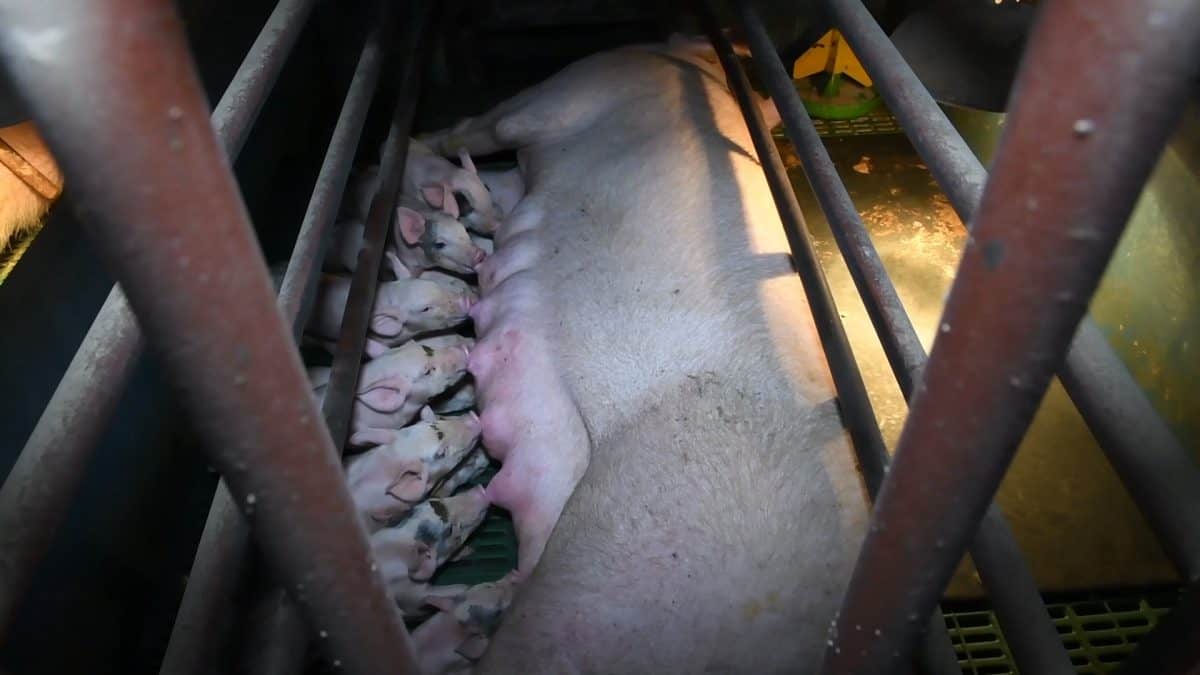 Here in the UK, we pride ourselves on being a nation of animal lovers – but is this really true? Yes, we undoubtedly love our pets, but what about the animals we farm for food? Do we also treat them with the respect and compassion they deserve? Sadly, the answer is all too often NO. We continue to allow hundreds of thousands of pigs to suffer in cages every year – but now MPs have an opportunity to help end this cruelty.

On Wednesday (10th March), Sir David Amess MP will present a Ten-Minute Rule Bill to Parliament. Supported by Compassion in World Farming – a charity I have supported for decades and of which I am a proud Patron – the Pig Husbandry (Farrowing) Bill would require the phasing out of farrowing crates for pigs across England by 2027.  It would also prohibit the installation of new farrowing crate systems, from the date on which it enters into force.

Thirty years ago, we persuaded the then government to ban the keeping of pregnant sows in narrow stalls, unable to turn round throughout their long pregnancies. Sadly, although sows can now move around during pregnancy, they are placed into narrow farrowing crates shortly before they give birth and kept there while they suckle their piglets.

Despite Britain’s claim of leading the way globally when it comes to animal welfare, around 200,000 mother pigs are suffering in these cages on farms across the UK where they are forced to give birth and then nurse their young through bars. The sows are only able to stand up or lie down until their piglets are weaned and taken away, usually at around four weeks of age. It is hard even to begin to understand the impact this must have on their wellbeing.

Whilst imprisoned in farrowing crates these sensitive, intelligent animals are unable to express many natural behaviours. They can’t walk, let alone build nests for their piglets or forage for food. Instead, they bite and chew the bars and scrape at the floor in frustration. Many endure painful wounds and sores on their legs, feet and shoulders, caused by slipping or lying on the hard, slatted floors. Hour after hour, day after day, week after week, the misery continues. This is completely wrong and yet, astonishingly, it is still legal.

In Spring 2019, Compassion in World Farming released an undercover exposé which revealed the gruelling conditions typical of pigs in factory farms all over the UK. The footage is truly heart-breaking. We have to end this suffering.

There is a better way

The crazy thing is, we don’t need to cage our pigs like this. Many farmers are already showing there is a better way. Whilst some claim that farrowing crates prevent piglet deaths from crushing, we now know that numerous alternatives exist which offer better welfare for the sow and give piglet mortality rates as low as, or lower than, crates. Free farrowing systems also offer improved productivity – with sows producing more milk it means their piglets gain additional weight, are less likely to starve or be crushed, and are heavier at weaning. Outdoor free range farrowing systems provide the best welfare potential for pigs, with research revealing around 30% fewer stillborn piglets per litter and a decrease of around 40% sow mortality compared with indoor systems. This is a win-win situation for the piglet, the sow, and the farmer.

Whilst the UK paved the way in banning the use of sow stalls, more than 50% of sows are still caged here in farrowing crates. Many European countries have already taken steps to End the Cage Age for pigs and we are in serious danger of falling behind. Norway, Sweden and Switzerland have banned the routine use of farrowing crates. Germany (Europe’s largest pig producer) will restrict the use of farrowing crates to a maximum of 5 days, following a transition period, and Austria has also introduced legislation, yet to come into effect, that will similarly limit the amount of time a sow can be kept in a farrowing crate.

Our politicians have a duty to end this cruelty

The Prime Minister has said previously that the UK can ban farrowing crates once we have left the EU. It’s now time for the government to deliver: ban cruel farrowing crates across England and pave the way to End the Cage Age for all UK pigs.

I urge MPs to do the right thing and support the Pig Husbandry (Farrowing) Bill, on Wednesday, by showing strong support for it in the Chamber, and ensure that the Government embraces a cage-free future for farmed animals – because a life in a cage is no life at all.