From the newsletter: Underinvestment will be taken on the chin, but hoodwink the north at your own peril. 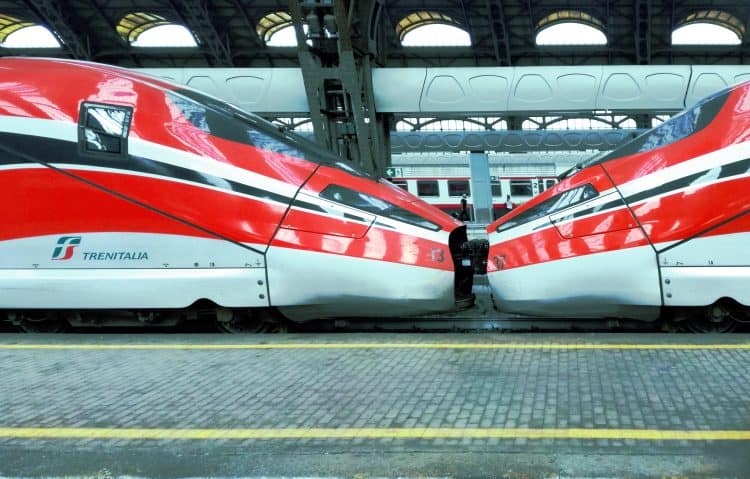 Good morning. Henry is away for the weekend and, at the time of sending, is probably hurtling across northern Lombardy enjoying mesmerizing vistas aboard a Frecciarossa train, a cup of complimentary coffee on the table and some sort of clever book on Venetian architecture or avant-garde in hand (probably to disguise his Dan Brown novel).

The Frecciarossa is, as I wrote here, the train that changed my mind about HS2. They are spacious, clean, comfortable and can reach speeds of 300 km/h on full tilt, connecting Milan and Rome in under three hours and Bologna and Florence in just over half an hour. Crucially, most of the network is in the north, linking up the capital to the country’s economic and industrial heartlands and, in kind, connecting those cities with each other.

So far, it has been a riotous success. Last month CNN attributed the downfall of Italy’s national airline, Alitalia, to the growth of the Frecciarossa. According to its figures, around two-thirds of people travelling between Rome and Milan, the country’s main business route, now take the train. It has transported more than 350 million passengers over 380 kilometres, creating half a million jobs and saving 20 million tonnes of CO2. A remarkable endorsement of a high-speed rail network that debuted in 2008.

So it was with a heavy heart that I read this week that Boris Johnson plans to ‘scale-back’ rail investment in the north of England, ditching the eastern leg of HS2 and throwing Northern Powerhouse Rail (NPR) on the scrapheap. The prime minister argued that people can’t have “everything at once” in defence of the upheaval, saying that going ahead with the HS2 extension would mean “smashing through unspoilt countryside and villages”. Tell that to people in Doncaster, who have already been turfed out of their homes to make way for the line, “all for nothing”.

It will come as no surprise to people living in the north that their transport priorities have, once again, been shunted into the side-line. Transport spending since 2010 equates to around £864 per person in London, in the north it is £349. Until recently temporary Pacer trains – busses on freight-wagon underframes – ran most local lines, and it still takes comfortably over an hour to get to Manchester from Leeds, despite the two cities sitting 30 miles closer to each other than Bologna and Florence, where train times are half that.

Telling northerners, therefore, that more underinvestment is on the way is like telling them the pope is Catholic. No shit. Underinvestment has been par for the course under most administrations. This isn’t a Boris Johnson thing. But then, most administrations don’t promise 40,000 additional jobs as part of the HS2 Growth Strategy. Most don’t promise a £54 billion boost to the regional economy by 2050. Most don’t promise unrivalled connectivity, levelling-up or a new start for the north.

Underinvestment is a word that is taken on the chin in the north – “I’ll believe it when I see it”, most say – but they take less kindly to being hoodwinked. That is the ultimate betrayal.