The turnout of around 500 from the much quoted 17.4 million leave voters must have been disappointing to those leading the ‘leave now/no deal’ lobby. 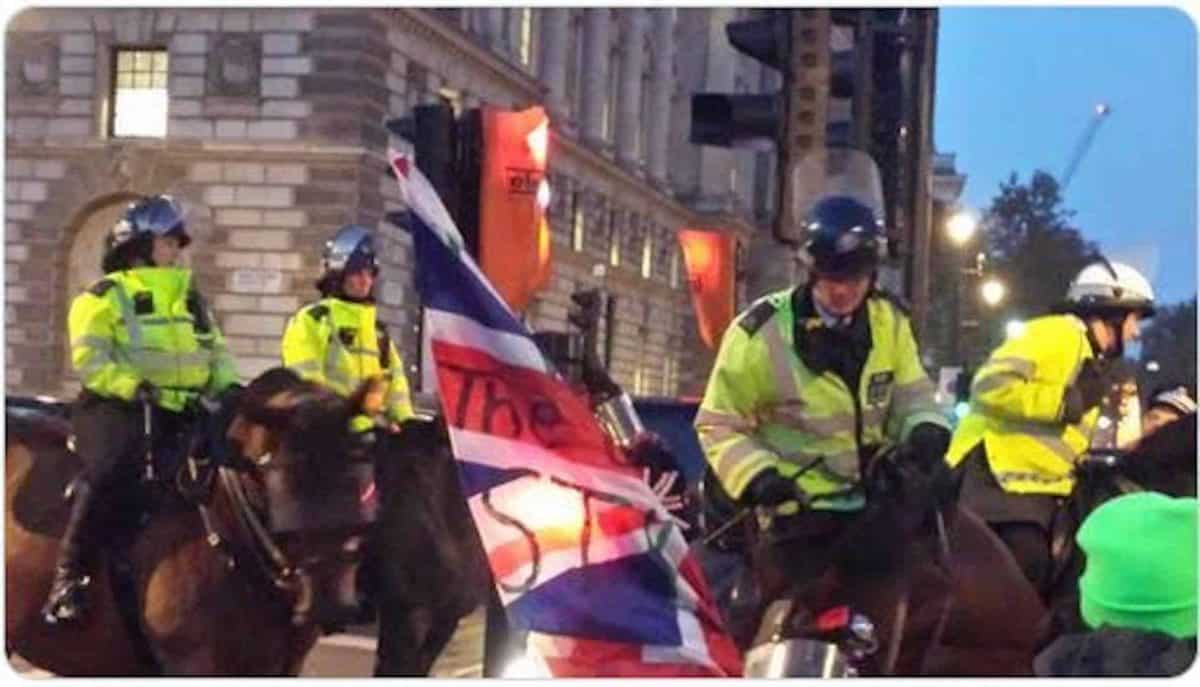 It was a surreal, London life moment: Trotting slowly down Whitehall towards Downing Street was a female police officer who incidentally was Asian, clutching the hand of a small sobbing boy aged about 4 who incidentally was black. They passed, marching in the opposite direction, about 100 foul-mouthed, road blocking Brexiteers who in turn were followed by a line of police.

Happily, the boy was quickly reunited with Mum and I was able to give a brief ‘well done’ to the smiling officer as she returned to her colleagues who were guarding the gates at Downing Street.

Police and barriers outside Downing Street on Halloween were not in connection with unwanted trick or treating, but a response to concerns that Britain ‘would explode’ after failing to leave the EU on the date promised by Boris Johnson. The original ‘would explode’ comment by the outspoken MP, Mark Francois was the subject of much ingenious social media ridicule throughout the day.

Whilst Mark Francois seems to have, whether deliberately or otherwise, developed the persona of an objectionable, loud-mouth bully, I did wonder whether he may have been spot on earlier, as I walked down from Trafalgar Square into Whitehall.

There were distinct sounds of shouting and swearing which indicated some sort of disturbance taking place outside the Wetherspoon’s Lord Moon at the Mall pub which has become a rallying/meeting point over the past year or so for those generally regarded as on the far right of UK politics.

During the recent ‘million strong’ People’s Vote rally, Brexiteers outside the pub heckled Remainers as they walked down towards parliament Square in between chanting for ‘Tommy Robinson.’

This disturbance however, turned out to be a falling out between two separate groups of Brexiteers. One group appeared to be linked to the pro-Brexit football supporters while the other I recognised from London yellow vests protests although yellow vests were to be conspicuously absent from the evening’s events.

The ever- efficient Lord Moon door-staff moved quickly to separate the protagonists and two police officers were quickly on the scene followed by a police carrier arriving on ‘blues and twos.

The incident however could hardly be described as falling into the ‘exploding Britain’ category and then, after walking down Whitehall, I could hear the distant strains of the Tommy Robinson song. This was emanating from the group mentioned above during the incident involving the distressed little boy with the caring police officer. I carried on to Parliament Square where about 300 Brexit protestors had gathered in the vicinity of the Carriage Gates with some spilling out onto the roadway.

There was, however, no sign of confrontation or indeed of any ill-feeling to either police or the occupants of the adjacent historic buildings responsible for hindering the implementation of Brexit. I ambled on to College Green which was strangely silent. Remainers, including ‘loud mouth Steve,’ the individual known for interrupting the TV broadcasts, had wisely gone home as had most television crews.

So, it was back to Parliament Square. More police had arrived and moved the Brexiteers back onto the footway. They had, however, been joined in Parliament Square by the Tommy Robinson enthusiasts seen earlier.

‘Shame on you Boris‘

It looked as if the evening would peter out and I started to make my way back up Whitehall. However, the restless Tommy Robinson group decided it was time for another walk up Whitehall, blocking the traffic as they did so. On reaching Downing Street, chants of ‘Shame on you’ were directed, clearly not at police but at Boris. The brief love-affair that had seen ‘Brexit ultra’s’ chanting ‘We love you Boris’ just weeks ago would appear to be over on the grounds that our Prime Minister no longer appeared to be an advocate of a ‘no-deal’ Brexit.

At this point a number of mounted officers came trotting up Whitehall and positioned themselves in front of the Downing Street gates. About six Brexiteers, half of whom were clutching cans of lager, then decided to stage a sit-down in the roadway.

They were moved with ease by police but not before those Brexiteers watching on voiced their views as articulated by the individual who told two female officers, ‘You didn’t do nothing when it was those f*cking, leftie c*nts did you?’ seemingly ignoring the fact that moving several thousand sitting or lying on the ground individuals was a rather different proposition and, in any event, approaching 2,000 had been arrested.

These protestors were joined on the footway by Territorial Support Group officers and were slowly moved along. At this point the mounted officers left their positions at Downing Street and began galloping up Whitehall towards the Lord Moon at the Mall.

There’s a difference outside McDonalds

Whatever disorder there was had ended by the time I arrived but the tourists on the opposite side of Whitehall by McDonalds were entertained by a female wrapped in a St. George’s Flag who appeared to be having a total drunken meltdown and whose screaming invective, with frequent use of the f and c words, was directed against corrupt  politicians and traitors generally. Drunken, foul mouthed harridans do seem to be a feature of ‘rightist’ protests be they in relation to Brexit or incarcerated patriots.

A scuffle with police opposite McDonalds was quickly resolved and a walk back down to Parliament Square revealed many Brexiteers had adjourned to the St. Stephen’s Tavern in Bridge Street opposite Parliament. From there, they hurled insults at impassive, watching police officers including cries of ‘paedo protectors.’

After a quick snack nearby, it transpired that a number of Brexiteers had reconvened on Parliament Square with a sound system that resulted in a cheery sing along to ‘Sweet Caroline’ and ‘London’s Calling.’

The night was almost complete. Britain didn’t explode and thus far shows no sign of exploding. Talk on social media of a pro-Brexit rally in London on the following Saturday proved just talk while a ‘Leave Now’ rally in Doncaster on Saturday morning reportedly attracted no-one. Perhaps the rugby was a more attractive proposition. Equally the lighting of ‘rebel’ Beacon’s across the country proved little more than idle social media speculation.

Given that, even allowing for the fact that the 31st was both a working day and Halloween, the turnout of around 500 from the much quoted 17.4 million leave voters must have been disappointing to those leading the ‘leave now/no deal’ lobby.

Conversely it could be also be argued that the overwhelming majority of law abiding Brexiteers don’t wish to be associated with the rowdy minority who seem intent on intimidating and confronting both rivals and police.

In fairness to Mark however, perhaps the sting had been taken out of the situation by the announcement of a General Election but in an unpredictable, chaotic Britain who knows what the future holds?