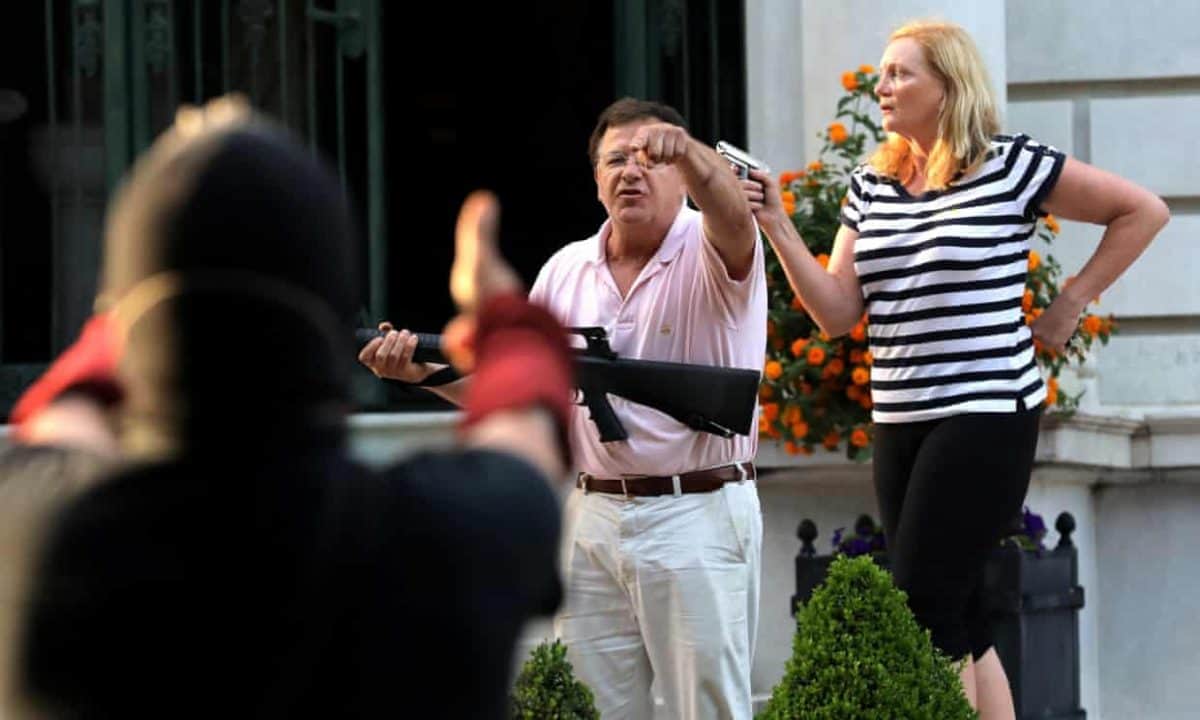 Husband and wife, Mark and Patricia McCloskey pointed guns at protesters in St. Louis as a group marched toward the mayor’s home to demand her resignation.

Donald Trump courted controversy by retweeting the footage and some on the right-wing have hailed them as heroes.

The video shows the armed couple standing outside their large home on Sunday evening in the upscale Central West End neighborhood of the Missouri city.

The couple brandished an AR-15 and a handgun at protesters marching past their mansion in an upscale St. Louis neighborhood called Forest Park at around 6pm on Sunday.

The peaceful protesters were en route to Mayor Lyda Krewson’s home to demand her resignation. They were angry as the Mayor had released the names and addresses of residents who had suggested defunding the police department.

In a Facebook live briefing on Friday, Lyda Krewson read the names and addresses of several residents who wrote letters suggesting she defund the police department.

The video was removed from Facebook and Krewson apologized on Friday, stating she did not “intend to cause distress”.

In reaction to this the protestors headed towards the mayor’s home, chanting, “Resign Lyda, take the cops with you.”

President Donald Trump has denied that he had been briefed on reported US intelligence that a Russian military intelligence unit secretly offered bounties to Taliban-linked militants for killing American troops in Afghanistan.

American intelligence officials concluded months ago that Russian officials offered rewards for successful attacks on American service-members last year, at a time when the US and Taliban were holding talks to end the long-running war, according to The New York Times.

A senior administration official said the White House planned to brief select members of Congress on the subject on Monday.

President Trump, in a Sunday morning tweet, said that “nobody briefed or told me” or Vice President Mike Pence or chief of staff Mark Meadows about “the so-called attacks on our troops in Afghanistan by Russians”.

“Everybody is denying it & there have not been many attacks on us,” he said.