“As soon as the speakers started attacking the media, talking about fake news, it was like the KKK hoods came over these people who had been nice to me before." 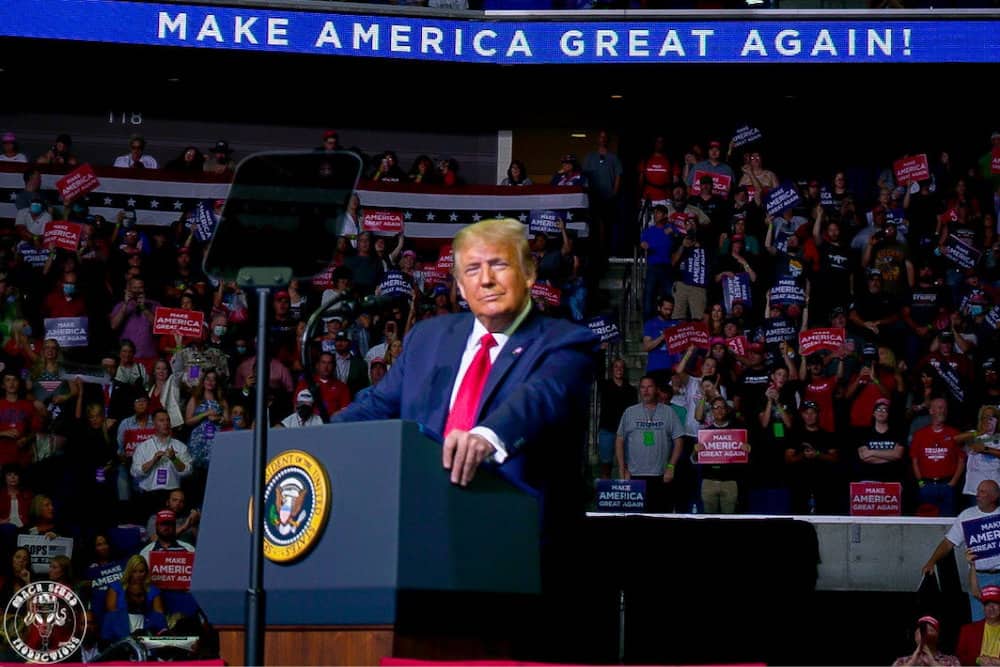 One of the pictures made by D’ante Speed before he was turned out of a Trump campaign rally. See SWNS story SWSYrally. A black photographer claimed he was thrown out of President Trump’s campaign rally and threatened with arrest despite repeatedly showing his press pass. D’ante Speed, 24, filmed cops escorting him out of the political event at the BOK center in Tulsa, Ohio, on Saturday [June 20] as the national guard stood by. The freelance photographer alleged that a police officer threatened to arrest him if D’ante recorded the interaction and even reached for his gun. D’ante believed that he was ejected from the rally because he was black and a member of the press. Credit;SWNS

A black photographer was thrown out of President Trump’s campaign rally in an atmosphere he describes as similar to the “KKK.”

D’ante Speed, 24, claims he was quietly trying to do his job when he was escorted from the building and told he was “not welcome.”

Mr. Speed filmed cops escorting him out of the political event at the BOK center in Tulsa, Oklahoma, on Saturday [June 20].

He claims that a police officer threatened to arrest him if he recorded the interaction and that the officer reached for his gun.

A senior Trump campaign official confirmed that Mr. Speed was ejected from the rally but said it was because he broke safety rules.

The official said: “The Trump campaign has a safety and security protocol created in conjunction with the secret service of the United States.

“This gentleman violated that protocol which was why he was told to leave.”

But Mr Speed insists that he did not break any rules, claiming he was ejected from the rally when the crowd began to turn, after Trump made comments about the ‘fake news’ on stage.

“One of the main themes of the whole rally was how the press are fake news.

“All these white Trump supporters were being nice to me and asking for pictures throughout the day.

“But as soon as the speakers started attacking the media, talking about fake news, it was like the KKK hoods came over these people who had been nice to me before.

“Once Trump was up, there was outroar.

“The crowd was yelling, booing and hissing at the media section.

“I stayed in the media section at first, then a security guard gave me permission to go into the crowd, so I could take pictures of people attending the rally.”

He said that at 8.35pm, during Trump’s speech, he was approached by a white female campaign staffer who told him he was no longer welcome at the event.

“Everything was fine until a lady bumped me real hard.

“She turned around, looked at me and yelled: ‘You’re not allowed here. You’re not welcome here anymore’.

“A big white security guard grabbed me and told me that I had to go.

“I tried to reason with him, I told him that I was a member of the press multiple times and I kept showing him my pass which was around my neck.

“He just kept telling me that there was nothing I could do about it.

“They were being aggressive and mean but I got one cop to understand my point of view and he started talking to me like I was a human being and not just an animal.”

A security guard assigned to the media area then fetched Mr. Speed’s camera and equipment before he was escorted out of the BOK Center by heavily-armed police.

He said: “The new cop was aggressive and seemed in an attacking mood. He started threatening me with arrest.

“I told him that he couldn’t arrest me and said that I was going to start filming him.

“He was terrified when I said that, like his job could be on the line. He put his hand on his gun and started yelling at me not to grab my phone.

“He said that if I grabbed my phone, I would be arrested and restrained and charged with trespassing.

“I didn’t reach for my phone because I didn’t know what he’d do.

“But when he led me to the gate I pulled out my phone because I had some distance from the cop.”

Many journalists and photographers have been subjected to violence and wrongful arrests at the hands of law enforcement while covering Black Lives Matter demonstrations this summer.

The President is well known for labelling critical coverage of his administration “fake news” and has frequently called press organizations and individual journalists “enemies of the people.”