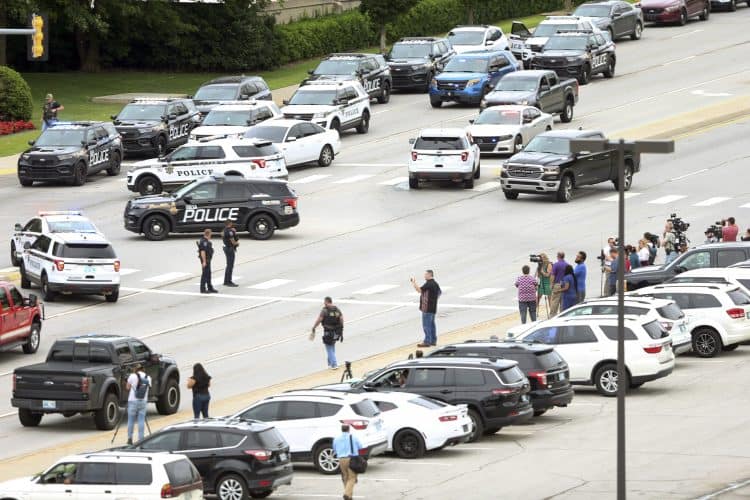 At least four people were killed on Wednesday in a shooting at a Tulsa medical building in a scene which police called “catastrophic”.

“Today’s shooting at my med school hospital in Dayton, OH didn’t even make national news because it was overshadowed by another shooting at another hospital in Tulsa, OK.”

It was unclear what prompted the deadly assault. However, the unidentified gunman fired both a handgun and a rifle during the attack, Mr Dalgleish said.

“Officers are currently going through every room in the building checking for additional threats,” police said in a Facebook post just before 6pm local time.

“We know there are multiple injuries, and potentially multiple casualties.”

Police responded to the call three minutes after dispatchers received the report and made contact with the gunman one minute later, Mr Dalgleish said.

Police captain Richard Meulenberg also said multiple people were wounded and that the medical complex was a “catastrophic scene”.

Police and hospital officials said they were not ready to identify the dead.

St Francis Health System locked down its campus on Wednesday afternoon because of the situation at the Natalie Medical Building. The Natalie building houses an outpatient surgery centre and a breast health centre.

Tulsa resident Nicholas O’Brien, whose mother was in a nearby building when the shooting occurred, told reporters that he rushed to the scene.

“They were rushing people out. I don’t know if some of them were injured or just have been injured during the shooting, but some of them couldn’t walk very well. But they were just kind of wobbling and stumbling and getting them out of there,” he said.

“I was pretty anxious. So once I got here and then I heard that she (his mother) was OK, the shooter had been shot and was down, I felt a lot better. It still is horrible what happened,” Mr O’Brien said.

The shooting on Wednesday comes eight days after an 18-year-old gunman armed with an automatic rifle burst into Robb Elementary School in Uvalde, Texas, and killed 19 children and two teachers before being fatally shot himself.

Agents from the Bureau of Alcohol, Tobacco, Firearms and Explosives were also at the scene, a spokesperson said. A reunification centre for families to find their loved ones was set up at a nearby high school.