Scientists have mapped out the potential global spread of coronavirus 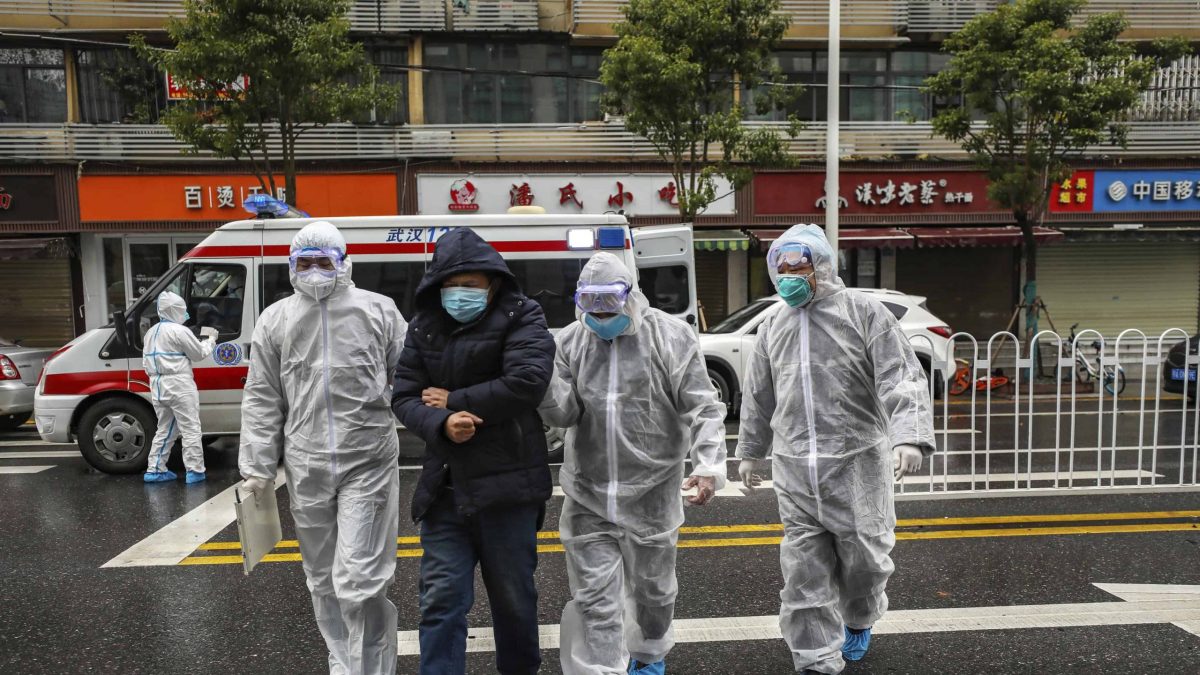 UPDATE: Britons returning from coronavirus-hit Wuhan in China will be put in quarantine for 14 days. Officials are looking at taking passengers to a military base once they arrive home, the Department of Health said.

A flight is due to leave Wuhan in China on Thursday. It will carry passengers from Wuhan city and those from Hubei province who want to return to the UK.

Passengers may be asked to sign a contract before they board the plane saying they agree to being placed in quarantine. Anyone who does not wish to sign could be asked to stay.

Around 200 British nationals are thought to be in the Chinese city. Health Secretary Matt Hancock tweeted: “We are working hard to get British nationals back from Wuhan. Public safety is the top priority. Anyone who returns from Wuhan will be safely isolated for 14 days, with all necessary medical attention.”

The number of coronavirus cases in mainland China has now overtaken the total recorded during the 2002-3 SARS (severe acute respiratory syndrome) epidemic, although the death toll remains much lower. Schools in Beijing have been shut indefinitely.

Coronavirus, also known as 2019-nCoV, is deemed highly contagious and transmitted via a simple cough or sneeze.

British Airways has suspended all flights to and from mainland China as the UK Government finalises urgent plans to bring Britons back from the coronavirus-hit province of Hubei.

The airline, which operates daily flights to Shanghai and Beijing from Heathrow, said it was halting the flights with immediate effect after the Foreign Office warned against “all but essential travel” to the country because of the virus outbreak.

The US and Japan have also announced plans to evacuate their citizens from China. In Australia, officials unveiled plans to evacuate its nationals from Wuhan and the surrounding Hubei province, with plans to quarantine them in the Christmas Island immigration detention centre.

The race to curb the spread of the new strain of coronavirus that has killed over 130 people worldwide has triggered a massive public health experiment in China. Authorities have indefinitely barred about 50 million people from traveling and advised them to stay home to contain the rapidly spreading virus.

The world will be watching the unprecedented quarantine of a region of China containing roughly the population of the UK to see if the experiment works. Though some health experts have warned it is too little, too late and could backfire, sparking food and medicine shortages, panic and mistrust of the Chinese authorities.

Hong Kong is limiting visitors from the Chinese mainland. There is much mistrust in Hong Kong where the initial Chinese cover-up of the SARS epidemic which claimed 299 lives in Hong Kong in 2002-2003 is still remembered.

A British lecturer stranded in Wuhan city, who described the streets as “deserted”, said UK officials have confirmed a flight will take citizens back to England, while others said this would be on Thursday.

The deadline for those stuck in the city of Wuhan and surrounding areas to contact the British consulate expressing their wish to leave passed at 3am UK time (11am local time).

In a statement on Wednesday morning, British Airways said: “We have suspended all flights to and from mainland China with immediate effect following advice from the Foreign Office against all but essential travel. We apologise to customers for the inconvenience, but the safety of our customers and crew is always our priority. Customers due to travel to or from China in the coming days can find more information on ba.com.”

It comes after the Foreign Office updated its advice on Tuesday to warn against “all but essential travel” to mainland China, saying it may become more difficult for British nationals in other provinces to leave. Up to 200 UK citizens are expected to want to fly home from Hubei province.

They were being told by the Government to “self-isolate” for 14 days after they arrive in the UK, but after many kicked up a fuss at the unclear instructions, arrivals from the region will be quarantined.  The virus may be spread by people who are not displaying symptoms.

Lecturer Yvonne Griffiths, who is currently in a hotel in Wuhan, said she received news in the early hours of Wednesday morning that there is to be a flight from Wuhan airport to England.

She told BBC Breakfast that Stansted is a possible destination, but that has not been confirmed and timings had not been been firmed up either.

“We’ve to be there six to seven hours before the flight leaves, and we would have a screening from some health people here in Wuhan, and if we are not showing any symptoms then we’ll be able to board that plane,” she explained. “If we were to be suffering temperature or any other symptoms, breathing problems, then there seems to be a possibility of quarantining at this end.”

“It has been frustrating up until today,” the lecturer told the programme, adding, “prior to that, we had quite a long period of silence from the UK Government about whether there was going to be any contingency plan to get people home.”

The death toll in China from coronavirus has risen to 132, with confirmed infections surging to nearly 6,000.

Five people in the US are battling the virus but none have yet been confirmed in the UK. The UAE has reported four cases — the first in the Middle East — from one family traveling from Wuhan. Hong Kong and Australia both reported two new cases Wednesday. Infections have also been confirmed in South Korea, Japan, Nepal, Cambodia, Singapore, Vietnam, Taiwan, Canada and Sri Lanka.

Four cases have been confirmed in Germany, making it the second European country to report cases, after France. The Department of Health and Social Care said on Tuesday that 97 people in the UK have been given the all-clear for the virus, although scientists predict it may have already entered the country.

The Foreign Office has said UK nationals in China should “make decisions based on their own personal circumstances” over whether to leave other parts of the country.

Following the latest Foreign Office travel advice, consumer group Which? said people with trips to China planned should be covered for cancellations by their travel insurance. Adam French, from the organisation, said those already in the country should be entitled to be flown out or be compensated for any changes to their itinerary.

A coronavirus outbreak is more likely in Britain than any other country in Europe, according to new research that mapped the potential spread of the disease. The UK is on the front line in the battle against the killer disease – owing to the number of Chinese visitors.

More than 142,000 tourists arrive in London alone between January and the middle of March. Experts at Southampton University measured the potential global spread for the first time. They found the UK was the most “at-risk” nation on the continent – ahead of Italy and China’s neighbour Russia.

Globally it was ranked 17th, after USA (6th) and Australia (10th) – with London the 19th most vulnerable city across the world.

Thailand topped the list of countries most at risk. The findings are based on the number of air travellers predicted to arrive from the worst affected cities in mainland China. Paris was 27th on the list and Frankfurt was 30th – despite cases having been confirmed in France and Germany already.

Professor Andrew Tatem, director of a health project called WorldPop, said: “It’s vital we understand patterns of population movement – both within China and globally – in order to assess how this new virus might spread domestically and internationally.

“By mapping these trends and identifying high-risk areas, we can help inform public health interventions, such as screenings and healthcare preparedness.”

His team found Thailand’s capital Bangkok is currently the city most at risk from a global spread of the virus. Hong Kong is second followed by Taipei in Taiwan. Sydney comes 12th and New York 16th. The most “at-risk” countries or regions worldwide are Thailand with Japan second and Hong Kong third.

Within mainland China the cities of Beijing, Guangzhou, Shanghai and Chongqing are all identified as high-risk – along with the provinces of Guangdong, Zhejiang, Sichuan and Henan.

Prof Tatem and colleagues used anonymised mobile phone and IP address data from 2013 to 2015 along with international air travel information from 2018. This enabled them to understand typical patterns of movement of people within China, and worldwide, during the annual 40-day Lunar New Year celebrations – including the seven day public holiday from 24 to 30 January.

From this, 18 Chinese cities – including Wuhan – were identified at high-risk from coronavirus. The volume of air passengers likely to be travelling from these cities to global destinations over a three month period was also established. This enabled the team to rank the top 30 most at-risk countries and cities around the world.

The analysis is based on ‘non-outbreak’ travel patterns. But a high proportion of people travelled with symptoms at an early stage of the outbreak – before restrictions were put in place.

Five million may have left Wuhan before city was quarantined

According to Wuhan authorities it is likely more than five million people had already left the city before the travel ban was put in place.

In the weeks leading up to it, Chinese tourists flew across the world for Lunar New Year holidays. At the same time, the number of patients struck with the virus soared. Wuhan has been under lockdown along with several other cities in the Hubei province for almost a week.

The British embassy in Beijing said transport to get UK citizens out “may happen quickly and with short notice”.

One British teacher living in Wuhan, who asked not to be named, said she had been in contact with the British authorities who informed her that while she could return to the UK, her husband, who has a UK visa, would not be allowed to as he was a Chinese national.

It is understood that this was a result of restrictions imposed by China, rather than the UK. As a result, she decided that she would remain in China with her husband.

She said: “It’s what we were expecting to be honest, as we’d heard that it was like that for the American flight out. We had hoped it would be different, but oh well. If the situation stays as it is, or improves, then we’re fine. We just hope it won’t get any more serious.”

She added that a number of other Britons she was in contact with had arranged to return home, with some scheduled on a flight at 7am on Thursday.

A UK expert said developing a vaccine against coronavirus said it has a “very good chance” of being effective.

Professor Robin Shattock, head of mucosal infection and immunity at Imperial College London,said he plans to start testing the vaccine on animals by the middle of February, with human studies in the summer if enough funding is secured.

He warned there could be a second wave of coronavirus next winter across the globe.

Scientists are also working on emerging evidence which suggests the virus can be spread by people before they even develop symptoms.

This could hamper efforts to contain the virus as people who have no indication they are ill go about their usual daily lives. Meanwhile, reports from Japan and Germany on Tuesday suggested cases of coronavirus in people with no history of travel to Wuhan.