The US President tells Congress to follow him on Twitter for war updates and threatens ‘disproportionate’ retaliation. 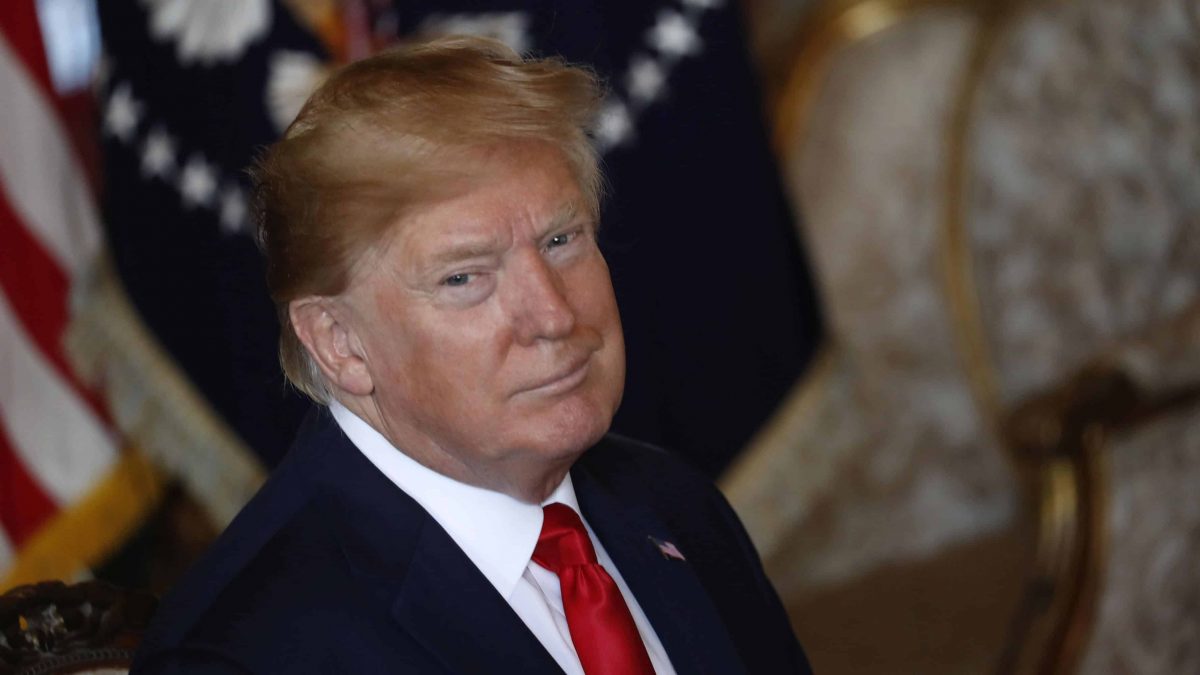 President Donald Trump returned to the White House after his 17-day Florida holiday to face the dangerous fallout from the strike he ordered to kill an Iranian general and his looming impeachment trial in the Senate.

The issues will shape a defining month of Trump’s presidency, one that comes just before the first votes of the 2020 campaign are cast.

Donald Trump faced growing questions from the US press and Democrats warning that the killing of Revolutionary Guard General Qassem Soleimani endangered Americans in the region and may have been an effort to distract from the president’s political crisis back home.

“Next week, the president of the United States could be facing an impeachment trial in the Senate. We know he’s deeply upset about that. And I think people are reasonably asking, ‘Why this moment?’” Elizabeth Warren, a Democrat running for president, said on CNN’s State of the Union.

“Why does he pick now to take this highly inflammatory, highly dangerous action that moves us closer to war?” the Massachusetts senator said.

In the hours before Trump finally returned from his two and a half week holiday break, tensions simmered as hundreds of thousands flooded streets in Iran on Sunday to walk alongside a casket carrying the remains of Soleimani the Iranian general killed with other Iranians and an Iraqi official by a US drone strike at an Iraqi airport.

The actions have endangered US actions in the region, with the Iraqi government saying the US has broken international law.

Iraq’s parliament voted in favour of a resolution calling for an end of the foreign military presence in their nation, an effort aimed at expelling the 5,000 US troops stationed there over the war against the Islamic State group.

Iraq’s Prime Minister Adel Abdul-Mahdi said he had been due to meet the murdered Iranian general who had arrived to give Iran’s response to a Saudi Arabian plan to defuse regional tensions when he was assassinated in the drone strike.

Donald Trump insisted Iranian cultural sites are fair game for the US military, dismissing concerns within his own administration that doing so could constitute a war crime under international law.

He also warned Iraq he would levy punishing sanctions if it expelled American troops in retaliation for a US airstrike in Baghdad that killed a top Iranian official.

Iran has vowed to retaliate and Iraq’s parliament responded by voting on Sunday to oust US troops based in the country.

Trump first raised the prospect of targeting Iranian cultural sites Saturday in a tweet. Speaking with reporters as he flew back to Washington from his holiday stay in Florida on Sunday he doubled down, despite international prohibitions.

The killing of General Soleimani sparked outrage in the Middle East, including in Iraq, where more than 5,000 American troops are still on the ground 17 years after the US invasion.

Iraq’s parliament voted on Sunday in favour of a non-binding resolution calling for the expulsion of the American forces.

Trump said the US would not leave without being paid for its military investments in Iraq over the years — then said if the troops do have to withdraw, he would hit Baghdad with economic penalties.

“We will charge them sanctions like they’ve never seen before ever. It’ll make Iranian sanctions look somewhat tame,” he said. “If there’s any hostility, that they do anything we think is inappropriate, we are going to put sanctions on Iraq, very big sanctions on Iraq.”

He added: “We’re not leaving until they pay us back for it.”

The administration has scrambled to contend with the backlash to the killing of General Soleimani. Though he was responsible for the deaths of hundreds of Americans, the American strike marked a stark escalation in tensions between Washington and Tehran.

Trump’s threats rattled some administration officials. One US national security official said the president had caught many in the administration off guard and prompted internal calls for others in the government, including Mr Pompeo, to clarify the matter. The official, who was not authorised to speak publicly, said clarification was necessary to affirm the US military would not intentionally commit war crimes.

The president’s threats to Iran did little to quell Tehran’s furore over the death of General Soleimani.

Iranian state television reported the country would no longer abide by any limits of the 2015 nuclear deal it signed with the United States and other world powers. Mr Trump withdrew the US from the deal in 2018 and stepped up economic sanctions on Tehran — actions that accelerated a cycle of hostilities leading to the last Friday’s assassination.

The administration also pushed back on Sunday on questions about the legality of the strike on General Soleimani.

US Secretary of State Mike Pompeo said the US military may well strike more Iranian leaders if the Islamic Republic retaliates. He tip-toed around questions about Trump’s threat to attack Iranian cultural sites, a military action that likely would be illegal under the laws of armed conflict and the UN charter.

Pompeo said any US military strikes inside Iran would be legal.

“We’ll behave inside the system,” Mr Pompeo said. “We always have and we always will.”

Pompeo said the administration would have been “culpably negligent” in its duty to protect the United States if it had not killed him. He did not provide evidence for his previous claims that General Soleimani was plotting imminent attacks on Americans. Instead of arguing an attack had been imminent, he said it was inevitable.

“We watched him continue to actively build out for what was going to be a significant attack – that’s what we believed – and we made the right decision,” he said.

Some Congressional Democrats were sceptical.

“I really worry that the actions the president took will get us into what he calls another endless war in the Middle East. He promised we wouldn’t have that,” said Chuck Schumer of New York, the Senate’s top Democrat.

Mr Schumer said Mr Trump lacked the authority to engage militarily with Iran and Congress needs a new war powers resolution “to be a check on this president.” To which Pompeo said: “We have all the authority we need to do what we’ve done to date.”

Sen. Mark Warner, D-Va., said the administration violated the Constitution by not consulting with Congress in advance.

Congressional staffs received their first briefings from the administration on Friday, and members were expected to be briefed this week.

But Donald Trump made clear on Sunday he sees little reason to give Congress advanced warning if he orders the military to carry out further actions against Iran.

“These Media Posts will serve as notification to the United States Congress that should Iran strike any US person or target, the United States will quickly & fully strike back, & perhaps in a disproportionate manner,” he wrote on Twitter. “Such legal notice is not required, but is given nevertheless!”

Moving swiftly to rebuke Trump for not consulting with Congress, House Speaker Nancy Pelosi said late Sunday the House would introduce and vote this week on a war powers resolution to limit the president’s military actions regarding Iran. In a letter to House Democrats, Ms Pelosi called the airstrike “provocative and disproportionate” and said it had “endangered our servicemembers, diplomats and others by risking a serious escalation of tensions with Iran.” A similar resolution was introduced in the Senate.

The conflict is rooted in Trump pulling out of Iran’s atomic accord and imposing sanctions that have crippled Iran’s economy. But it was not at the forefront of Trump’s his agenda when his holiday began.

The US President departed for Mar-a-Lago on December 20, just two days after the House of Representatives voted largely on party lines to approve two articles of impeachment against him over his pressure of Ukraine to investigate a potential political foe, former vice president Joe Biden.

During his stay, the President visited his nearby golf course nearly every day and kept his public appearances to a minimum. But behind the scenes, he held a series of meetings and phone calls to prepare for what lies ahead.

Trump spoke to some of his closest Republican allies in the Senate, including Lindsey Graham of South Carolina, about the upcoming trial. Though the details of the trial remain unclear, including when it will begin, the outcome seems all but certain, as the Republican-led Senate will almost surely not remove Trump from office.

House Speaker Nancy Pelosi, a Democrat, has delayed transmitting the articles of impeachment to the upper chamber, a necessary step before the trial can begin, because she has demanded assurances from Senate Majority Leader Mitch McConnell, a Republican, that the proceedings be fair.

Mitch McConnell, who has been dismissive of the request, has begun negotiations with Senate Minority Leader Chuck Schumer of New York over the contours of the trial, including whether witnesses would be called.