Update: four boys have been reported rescued from the cave now. They have been taken to hospital. Rescue operatiions will be resumed tomorrow morning when air tanks are replenished. Authorities in Thailand have confirmed that Thai Navy Seals have begun the hazardous operation to extract the 12 schoolboys and football coach who have been trapped […] 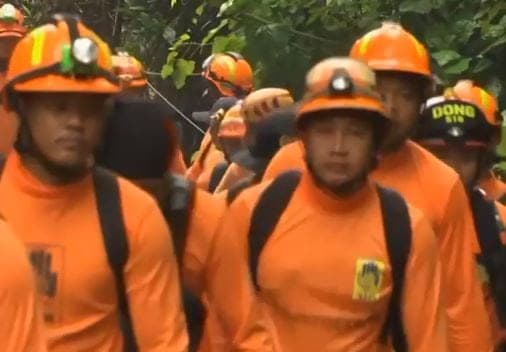 Update: four boys have been reported rescued from the cave now.

They have been taken to hospital. Rescue operatiions will be resumed tomorrow morning when air tanks are replenished.

Authorities in Thailand have confirmed that Thai Navy Seals have begun the hazardous operation to extract the 12 schoolboys and football coach who have been trapped in a flooded cave network for the past fortnight.

As rains began with the risk of further flooding of the caves, the navy divers and international rescue drivers who have been diving through submerged tunnels supplying the trapped chidren with food and suppies have been leading them out through miles of caverns.

Water has been pumped out of the cave network which is thought to have become submerged after the groups started exploring the cave network in a flash flood due to heavy rains, leaving them stranded on a higher ledge nicknamed Pattaya Beach.

Though the Thai navy divers had begun teaching the boys aged between 11 and 16 how to use diving equipment, on Friday authorities had said that they were not ready and fit enough for the dive through the flooded cavern network.

But today it was decided to extract them with the water at its lowest due to the pumping operation. It is unclear what has led to the sudden change in plan.

The Monsoon rains due to start this week and carry on for months could have sealed the boys in for around four months. It is unclear if authorities are now worried that the ledge they have been trapped on could also become submerged or whether oxygen levels could be maintained if they stay until waters recede.

“This is D-Day,” said Narongsak Osottanakorn, the rescue chief. “The boys are ready to face any challenges.”

With time running out before heavy rains are forecast to commence, he confirmed this morning that 18 divers had begun the operation to extract the boys.

He said that medics had confirmed that they were “very fit physically and mentally… They are determined and focused.”

“There is no other day that we are more ready than today,” said Narongsak Osottanakorn. “Otherwise we will lose the opportunity.”

The rescuers will be most concerned about the hazardous dive after losing a colleague earlier this week in the exhausting 11-hour round trip.

Saman Gunan lost consciousness returning from a mission to provide the group with air tanks and never recovered. The long dive through narrow underground channels is tricky for the most experienced cave divers.

There will be two divers with each of the boys but at points the underwater tunnels are so narrow that they will have to pass through without an air tank on.

Rescuers said they would “not let the sacrifice of our friend go to waste.”

They initially planned to extract the boys one by one, but now with time running out before the forecast heavy rains begin, the plan has changed to extracting them four at a time.

A medical team and helicopter await outside for each of those trapped in the cave ready to treat them and airift straight to a hospital.

Rescued boys have been taken to hospital. The mission to save the rest of those trapped underground involves a team of 50 international rescuers and 40 Thai naval divers.