Marketed, rather predictably, as the next Full Monty (yes another one), Oliver Parker’s Swimming With Men is a charming, if utterly forgettable comedy that follows the adventures of an all-male synchronised swimming team of varying ages and backgrounds as they navigate their respective difficulties in life, albeit via the medium of swimming in formation. Loosely […] 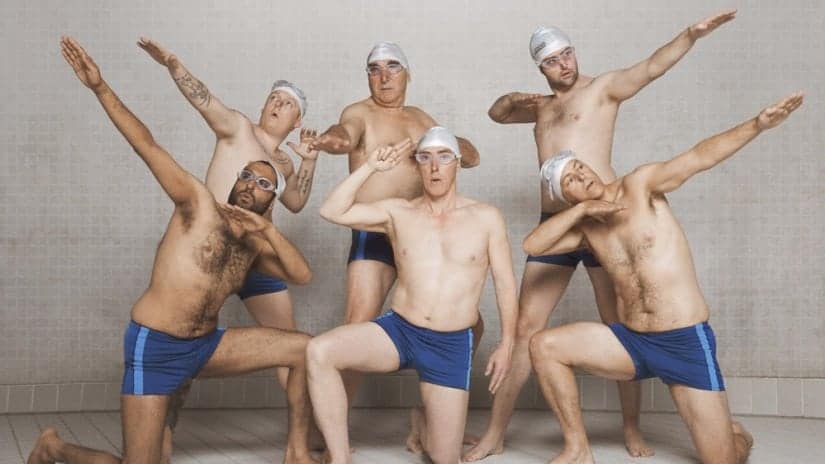 Marketed, rather predictably, as the next Full Monty (yes another one), Oliver Parker’s Swimming With Men is a charming, if utterly forgettable comedy that follows the adventures of an all-male synchronised swimming team of varying ages and backgrounds as they navigate their respective difficulties in life, albeit via the medium of swimming in formation. Loosely based on Dylan Williams’s 2010 documentary Men Who Swim, which told the real life story of middle-aged Swedish synchronised team, Swimming With Men stars Rob Brydon as a depressive accountant who finds solace in some new friendships after encountering difficulties in his marriage.

Eric Scott (Brydon) has it all, a dream job as accountant for the rich, a perfect marriage, and a devoted son who loves him dearly, but none of this seems enough to make him happy nowadays. Feeling unfulfilled and eternally down in the dumps, our hapless hero manages to convince himself that his wife is having an affair with her infuriatingly smug and pretentious boss, resulting in him packing his bags and moving to a hotel where he intends to stay for the foreseeable future.

Meanwhile, after a chance meeting with a group of men at a local pool, Eric is persuaded by his new friends to join their highly unorthodox synchronised swimming club, as they attempt to improve themselves by adding another member to the team. Soon, the group, who had until then struggled to make any of their complicated formation work, has a complete turn around after taking Eric’s vital and completely scientific advise.

As well as Brydon, the film stars the usually brilliant Daniel Mayes as builder Colin, Rupert Graves as newly divorced businessman Luke and Adeel Akhtar as the quietly depressive Kurt, while Charlotte Riley stars as Luke’s love interest and the group’s tireless swimming instructor. The rest of the film focuses on the group’s attempt to reach the world championships and culminates in an embarrassingly cringe-worthy showdown which does its best to appear worthy and inspiring, but which in the end makes you want to shout at the top of your voice “what exactly is the point of all of this”. And even if you’re willing to buy into the completely misjudged coupling of Graves and Riley who is over two decades his junior, the film is still unable to explain what motivates any of its characters’ actions.

While Parker does his best to inject some humour to this rather slow and sluggish comedy, the film is ultimately let down by its hugely predictable and utterly mundane screenplay, which simply fails to measure up to its ambitious premise. And despite its cast’s best intentions, Swimming With Men, simply just doesn’t cut it as comedy, nor does it bring anything new to this already overdone genre. All of which begs the question; shouldn’t there be a moratorium on all of these Full Monty wannabes, and isn’t it time we thought of new challenging ideas instead of recycling the same old tired clichés year in, year out?