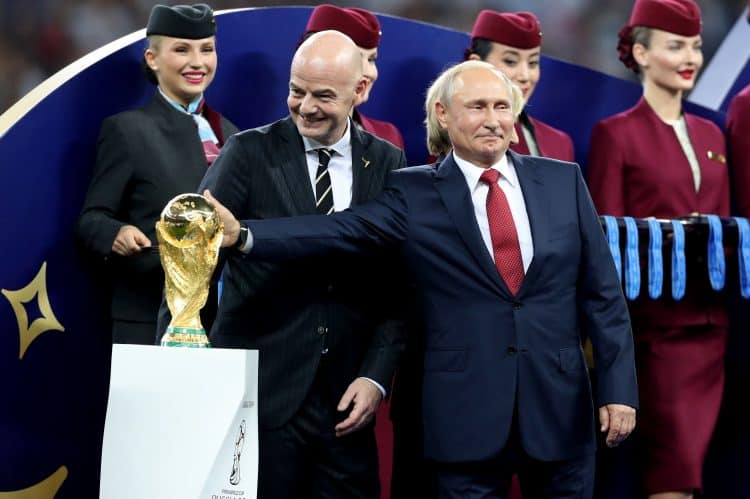 Fifa will suspend Russia’s national teams from international football until further notice, kicking them out of the forthcoming World Cup.

According to The Independent, the world football body is in advanced discussions with Uefa over the issue – with a decision due within hours.

The suspension would mean that, barring an unlikely change of course in the Russian invasion, the country would not be able to face Poland in a World Cup play-off semi-final next month.

The International Olympic Committee issued a recommendation to international sports federations earlier on Monday to exclude Russian and Belarusian athletes, officials and teams from international competitions wherever possible.

Fifa were heavily criticised on Sunday after it said Russia would be forced to play international matches in neutral countries without supporters.

The country would have been made to play under the name ‘Football Union of Russia’ and not as ‘Russia’ under new measures issued in response to the Ukraine crisis.

FIFA also ruled that no Russian flag or national anthem can be used at matches.

But these measures were labelled “unacceptable” by the Polish FA, whose president – Cezary Kulesza – said: “In the situation of war in Ukraine, we are not interested in the game of appearances.

“Our position remains unchanged: the national team Polish will NOT play against Russia in the play-off match, regardless of the name of the Russian team.”

The Football Association has announced England will not play against Russia in any international fixture “for the foreseeable future” following the invasion of Ukraine.

A statement on Sunday evening followed announcements by the football associations of Poland, Sweden and the Czech Republic – all future or potential opponents of Russia in World Cup qualifying – that they will refuse to play Russia at any venue.

The FA’s statement read: “Out of solidarity with Ukraine and to wholeheartedly condemn the atrocities being committed by the Russian leadership, the FA can confirm that we won’t play against Russia in any international fixtures for the foreseeable future.

“This includes any potential match at any level of senior, age group or para football.”

Culture secretary Nadine Dorries backed the move, tweeting: “I welcome this move from the FA. The UK is spearheading a global response to isolate Russia from sporting and cultural events on the world stage.

“(Russia President Vladimir) Putin must pay the price for his senseless and barbaric aggression against Ukraine.”