"To the people of Britain, I ask you that when you come home from work today, hug your family, hug your kids, close your eyes and for a second just imagine there are explosions outside your house." 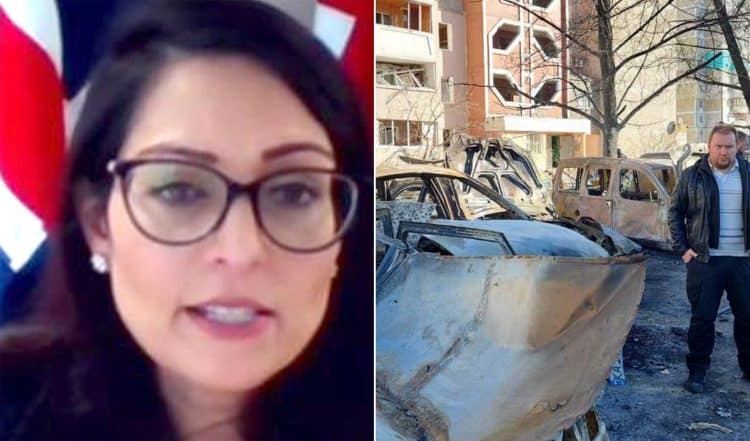 Priti Patel ruled out a visa waiver for Ukrainians fleeing the conflict with Russia because of fears that Moscow’s troops and extremists could seek to come to the UK.

The Home Secretary, who has come under intense political pressure from MPs across the Commons to do more to allow Ukrainian refugees to reach the UK, insisted she was taking action to open safe routes.

She told MPs she was following the “strongest security advice” as she rejected the call to scrap the need for visas.

“Over the weekend I have seen members of this House calling for full visa waivers for all Ukrainians,” Ms Patel said.

“Security and biometric checks are a fundamental part of our visa approval process worldwide and will continue, as they did for the evacuation of people from Afghanistan.

“That is vital to keep British citizens safe and to ensure that we are helping those in genuine need, particularly as Russian troops are now infiltrating Ukraine and merging into Ukrainian forces.

“Intelligence reports also state the presence of extremist groups and organisations who threaten the region but also our domestic homeland.

“We know all too well what Putin’s Russia is willing to do, even on our soil, as we saw through the Salisbury attack.”

A Ukrainian enduring shelling in Kyiv has urged Britons to “close your eyes and imagine” how it feels to experience bombs falling outside your home.

Vitaliy Rulyov, 36, from Trojeshchina, Desnyanskiy district of Kyiv, has compared air raids in the capital to Britain during the Blitz but said his city is “surviving and supporting one another”.

He told the PA news agency: “To the people of Britain, I ask you that when you come home from work today, hug your family, hug your kids, close your eyes and for a second just imagine there are explosions outside your house.

“Remember how your grandparents felt when they were bombed during the war with Hitler, because the British people suffered a lot.

“When you read about it in a book, it seems so easy to understand but really it’s impossible to express what you feel because you never know where a shell or missile will hit.

“But here in Ukraine, we are feeling this right now and we’re living through it.”

Mr Rulyov said since the first attack it has been “impossible to distinguish what day of the week it is” and instead counts the “number of days of war”.

He described President Putin as “sick” and warned that the war is “not about Ukraine” and that “people all over the world are in danger” if the Russians are successful.

He also urged European partners to close the sky above Ukraine in a bid to stop the Russian missiles and warplanes from flying over.

Mr Rulyov attempted to enlist in the regional defence, but was turned as they already had enough people and weapons.

He said civilians in Kyiv are living through “uncertainty and danger” but added “there is no fear” and people are “united.”

“We don’t need anything except for medication, food and that kind of thing and I’m helping to provide that for now,” he said.

“People are willing to do the job protecting this city and if Mr Putin wanted to scare Ukraine and divide it, well I think that he has done the opposite.

“I was in line for bread and it took me two hours to get to the store but people were exchanging good things about how we are surviving and supporting each other.

“People in Ukraine are united to overcome this dreadful time and hopefully we will see a peaceful sky again.”

Olena Vinnychenko, 43, who lives 2km outside Kyiv, said she will never be able to forgive Russia for the war.

She told the PA news agency: “They killed a lot of people, a lot of children. And it’s not the military operation as they are saying in their television… it’s war. They’re bombing us. They’re killing us. And we can’t forgive this.”

Ms Vinnychenko has been sheltering at her friends’ house for four days along with six other families, including children.

She said the experience has been “terrible” and she has barely slept but added she is “getting used” to the sound of explosions and gunfire.

“Russian occupants are now on our territory so they can shoot, but we have guns to protect our families,” she said.

“These guns are for animals (hunting) but also we can use them to protect ourselves.

“We don’t panic, we are quiet, and our men are making territory protection on the streets of our neighbourhood.

“Honestly we are in very good conditions now in comparison with the people in the centre of the city in the multi-storey buildings.

“We are hoping for the best still because we can see that the world is supporting us.”