The US president called his plan a ‘win-win’ for both Israel and Palestine, despite the Palestinians not having been consulted. 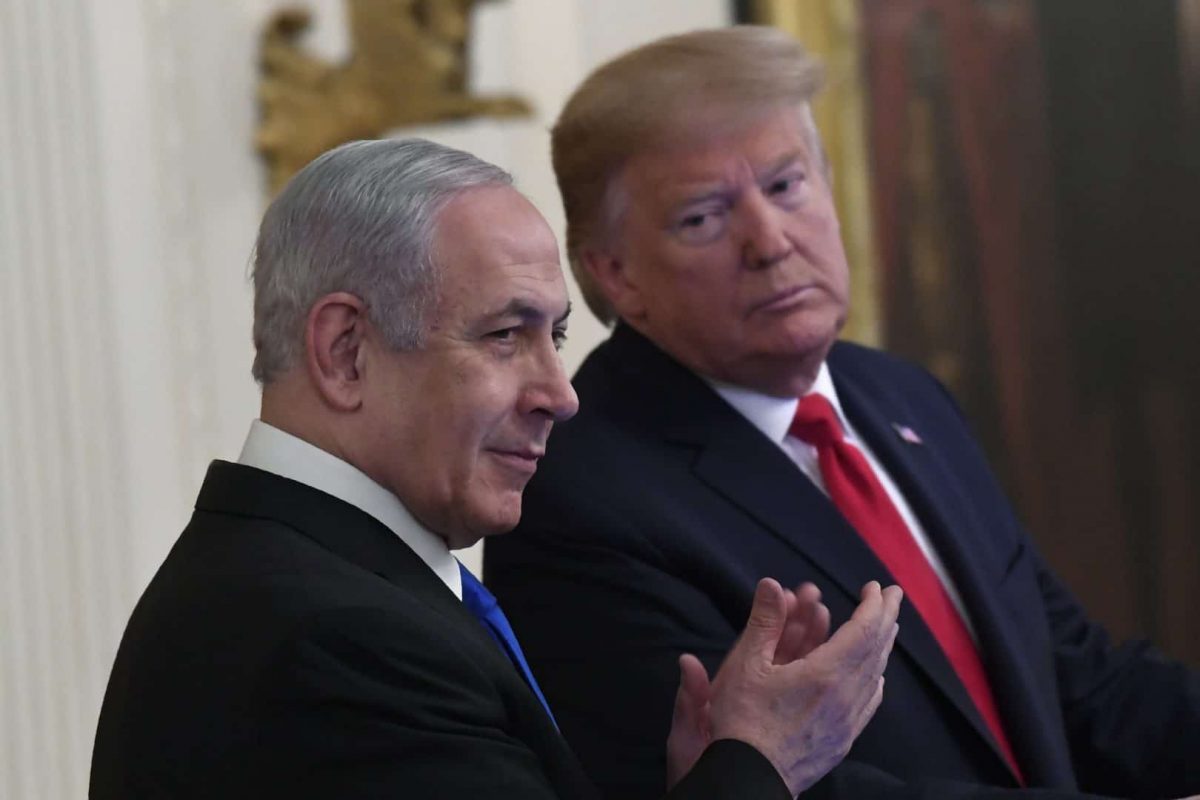 US president Donald Trump has unveiled his long-awaited Middle East plan, winning immediate praise from Israeli prime minister Benjamin Netanyahu but a swift rejection from the Palestinians, who called it “nonsense”.

Trump’s plan calls for the eventual creation of a Palestinian state, but it falls far short of minimal Palestinian demands and would leave sizable chunks of the occupied West Bank in Israeli hands.

Benjamin Netanyahu said he would move forward on Sunday and ask his Cabinet to approve plans to annex West Bank territory — an explosive move that is likely to be met with harsh international reaction as it breaches international laws and UN resolutions.

Israeli Prime Minister Benjamin Netanyahu plans a vote on annexing the Jewish settlements in the occupied West Bank and  parts of the Jordan Valley unveiled in the just-released Trump peace plan on Sunday, the Washington Post reports, in a land grab of 30 per cent of the occupied West Bank.

Trump’s plan allows Israel to extend sovereignty over the settlements, illegal under international law as they are on occupied Palestinian land.

Donald Trump called his plan a “win-win” for both Israel and the Palestinians, and Netanyahu called it a “great plan for Israel”.

At a speech in the West Bank, Palestinian president Mahmoud Abbas dismissed the plan as “nonsense”.

“We say 1,000 noes to the deal of the century,” Abbas said, using a nickname for Mr Trump’s proposal.

“We will not kneel and we will not surrender,” he said, adding that the Palestinians would resist the plan through “peaceful, popular means”.

Trump and Netanyahu announce peace plan as both face trial

With the Israeli premier standing beside him, Trump presented the plan at a White House ceremony filled with other Israeli officials, evangelical zionists, Israel-supporters and Trump allies. Trump’s evangelical support is massive and they fanatically support a Jewish state in Israel. While 40 per cent of US Jews believe that Donald Trump supports Israel too much, only 15 per cent of evangelical Americans would agree.

The ceremony came amid Trump’s impeachment trial and a US election year, and just hours after Netanyahu was indicted on counts of fraud, breach of trust and bribery in three separate cases, having withdrawn objections to facing the charges against him.

The longtime Israeli leader, who denies any wrongdoing, also faces a March 2 parliamentary election, Israel’s third in less than a year.

The Palestinians seek all of the West Bank and east Jerusalem — areas captured by Israel in the 1967 Mideast war — for an independent state and the removal of more than 700,000 Israeli settlers from these areas.

Under the terms of the “peace vision” that Trump’s son-in-law and senior adviser Jared Kushner has been working on for nearly three years, all settlers would remain in place, and Israel would retain sovereignty over all of its settlements as well as the strategic Jordan Valley.

The proposed Palestinian state would also include more than a dozen Israeli “enclaves” with the entity’s borders monitored by Israel. Trump acknowledged that he has done a lot for Israel, but he said he wanted the deal to be a “great deal for the Palestinians”. He said his vision gives the Palestinians the time needed for them to meet the challenges of statehood.

The only concession the plan appears to demand of Israel is a four-year freeze on the establishment of new Israeli settlements in certain areas of the West Bank.

But Netanyahu clarified later that this only applied to areas where there are no settlements and Israel has no immediate plans to annex, and that he considered the plan to impose no limitations on construction.

Kushner threatens Palestinians with more settlements encroaching on their lands

“If we don’t do this today, at the rate at which Israel is growing, I think that it will never be able to be done,” Jared Kushner told Al Jazeera after the announcement. “So we see this as the last chance for the Palestinians to have a state.” Trump’s son-in-law, settler champion and Trump’s Middle East envoy seemed to be suggesting that if Palestinians don’t acquiesce to the land grab, Israel would have American backing to increase the rapidly expanding programme of illegal settlements on Palestinian land.

Half a million settlers are now what Israelis call “facts on the ground” in 130 settlements on Palestinian land. These cut off farmers from land farmed for generations, cut off and pollute water supplies, and make life increasingly difficult for Palestinians. These illegal settlements also appear to still be there on the map drawn up for Trump’s peace plan.

Thousands of Palestinians protested in Gaza City ahead of the announcement, burning pictures of Trump and Netanyahu and raising a banner reading “Palestine is not for sale”.

The US President said he sent a letter to Mahmoud Abbas to tell him that the territory that the plan has set aside for a new Palestinian state will remain open and undeveloped for four years.

‘A great plan for Israel’

“President Abbas, I want you to know, that if you chose the path to peace, America and many other countries … we will be there to help you in so many different ways. And we will be there every step of the way,”  Trump said.

It also would give small areas of southern Israel to the Palestinians as compensation for lost West Bank land. But the many caveats, and ultimate overall Israeli control, made the deal a non-starter for the Palestinians.

But without Palestinian involvement in drawing it up, it was a deal made between two Israeli right-wingers. Netanyahu and his main political challenger in March elections, Benny Gantz, had both signed off on the plan.

Meanwhile, according to Israel’s Haaretz newspaper, Netanyahu actually exploited the Fifth World Holocaust Forum – which convened this week in Jerusalem to mark 75 years since the liberation of Auschwitz – to call on world leaders to back his insistence that the International Criminal Court in The Hague has no jurisdiction in the occupied Palestinian territories.

Israel’s prime minister is reacting to ICC prosecutor Fatou Bensouda’s announcement last month that the court will investigate potential war crimes in the West Bank and Gaza, pending an ICC judicial decision on jurisdiction. Netanyahu called the investigation “antisemitic” and compared it to the persecution of Jews commemorated in the Hannukah holiday.

Palestinians are subjected on a weekly basis to land grabs and prejudiced in the military courts that govern relations between settlers and Palestinians who have lived in the Occupied Territories for generations.

As Haaretz reports: “For Palestinians, quite literally, the International Criminal Court is their court of last resort. Yet Netanyahu, backed by Israel’s entire political leadership, is trying to quash even this faint hope.”

The Middle East peace plan announced by US President Donald Trump supports the Israeli position on nearly all of the most contentious issues in the decades-old conflict.

Where previous presidents tried to cajole Israel and the Palestinians into compromising on thorny issues like the borders of a future Palestinian state, the status of Jerusalem and the fate of refugees, Trump’s Middle East team largely adopted the Israeli position.

As a result, the Palestinians have angrily rejected the plan, and the international community appears unlikely to rally around it.

Here is a look at the key points of the 50-page proposal:

The peace plan said Israel will have to make “significant territorial compromises” and that a Palestinian state should have territory “reasonably comparable in size to the territory of the West Bank and Gaza pre-1967”, when Israel seized those territories and east Jerusalem in a region-wide war.

Although the plan provides for mutually agreed land swaps, a “conceptual map” released with the plan shows a disjointed Palestinian state, with Israeli and Palestinian enclaves linked to their respective states by what the plan calls “pragmatic transportation solutions”, including bridges, tunnels and roads.

The Jordan Valley, which accounts for around a quarter of the West Bank, “will be under Israeli sovereignty”.

The peace plan would leave most of annexed east Jerusalem, including its Old City and holy sites, under Israeli control while allowing the Palestinians to establish a capital on the outskirts of the city outside Israel’s separation barrier.

It said Jerusalem’s holy sites, sacred to Jews, Christians and Muslims, should be open to worshippers. The understandings governing the flashpoint holy site known as the Al-Aqsa mosque compound to Muslims and the Temple Mount to Jews would remain in place.

The plan allows Israel to immediately annex virtually all its settlements in the occupied West Bank, which are viewed as illegal by the Palestinians and most of the international community.

It would freeze settlement construction in areas earmarked for the future Palestinian state during the period of negotiations, but those areas are already largely off-limits to settlement activity.

“Not a single settlement will be evacuated,” Israeli prime minister Benjamin Netanyahu told reporters. “Itamar is equal to Tel Aviv,” he said, referring to a Jewish settlement in the heart of the West Bank.

Under the plan, Israel “will maintain overriding security responsibility” for the state of Palestine, which will be “fully demilitarised”.

The Palestinians will have their own internal security forces but Israel will control the borders and monitor all crossings. A “crossings board” made up of three Palestinians, three Israelis and a US representative will oversee the crossings and resolve disputes.

Israel will only implement its obligations under the plan if the Gaza Strip, which is currently ruled by the Islamic Hamas movement, is transferred back to the full control of the Palestinian Authority or another entity acceptable to Israel. Hamas and all other militant groups in Gaza must disarm and the territory must be fully demilitarised.

Hundreds of thousands of Palestinians fled or were forced out of what is now Israel during the 1948 war around its creation. Those refugees and their descendants now number around five million and are scattered across the region.

The Palestinians believe they have the “right of return” to former properties, something Israel has always rejected, saying it would destroy Israel’s Jewish character.

The peace plan said “there shall be no right of return by, or absorption of, any Palestinian refugee into the state of Israel”. It added refugees can live in the state of Palestine, become citizens of the countries where they live or be absorbed by other countries.

In return for giving up on their national aspirations, the peace process promises Palestinians $50 billion in investment, mainly promised by the Gulf states.

Jordan, where many Palestinian refugees had fled, gave the peace plan a cool reaction, saying it remained committed to a two-state solution based on Israel’s pre-1967 lines. It also said it rejected any unilateral move by Israel, referring to the annexation plan.

Egypt, the first Arab country to reach a peace deal with Israel, urged Israelis and Palestinians to carefully study the plan. The European Union also said it needed to study it more closely. Officials said they expected Gulf Arab states like Saudi Arabia, the United Arab Emirates and others to cautiously welcome the plan.

Arab League chief, Ahmed Abuel-Gheit said the Palestinian reaction would define the Arab response. He spoke after meeting with Palestinian official Jibril Rajoub at the Arab League headquarters in Cairo.

The reaction of Jordan, which would retain its responsibilities over Jerusalem’s al-Aqsa Mosque under the plan, is particularly significant, according to officials, who said Jared Kushner and others were reaching out to Arab leaders ahead of the rollout.

READ MORE: Trump reveals peace plan while he and Netanyahu both indicted, as settlement surge revealed too