Protests, strikes and sit-ins have been staged across Lebanon. 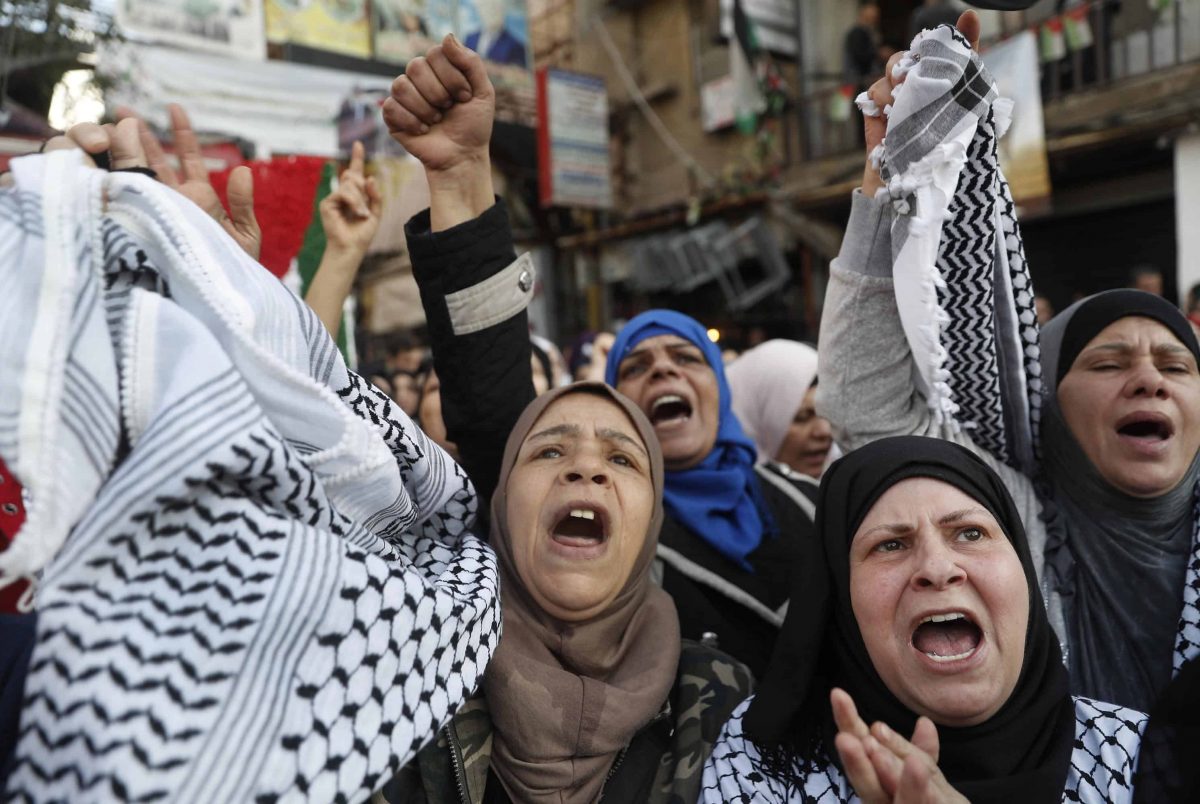 Donald Trump’s plan for ending the Israel-Palestine conflict has been branded “insulting”, “shameful” and “a disgrace” by Palestinian refugees in Lebanon.

At refugee camps across the country, Palestinians staged strikes, protests and sit-ins a day after US President Donald trump revealed the long-awaited details of the plan.

It was denounced as ridiculously lop-sided, with Palestinians saying it gives them no rights.

Sawsan Warde, a middle-aged Palestinian woman at the crowded Bourj al-Barajneh camp in the Lebanese capital Beirut, said.“Trump’s words mean nothing to us.

“This isn’t his land for him to bargain or sell or give to someone else,.

“He can give the Jewish people or Netanyahu a part of his land but Palestine is for us. It was, it is and will always be ours.”

The words reflected the deep bitterness felt by Palestinians at the plan unveiled by Mr Trump and Israeli Prime Minister Benjamin Netanyahu at the White House on Tuesday.

It supports the Israeli position on nearly all of the most contentious issues in the decades-old conflict and falls far short of Palestinian demands, leaving them with disjointed areas and allowing Israel to annex its settlements in the occupied territory.

Among Palestinian refugees, many likened the plan to the Balfour Declaration, the UK Government’s promise in 1917 to Zionists to create a Jewish home in Palestine.

“This is an extension of the Balfour declaration,” said Mariam Gebril, who took part in a protest at the Ein el-Hilweh refugee camp – an overpopulated, sprawling territory just south of Beirut that houses up to 70,000 refugees and their descendants.

“Trump thinks he controls the world and other countries. He imposes sanctions, opens and closes embassies as he wishes.

“The world doesn’t work this way,” she added, saying Palestinians need to fight back with weapons because diplomacy and negotiations do not work.

Protesters burned tyres and pictures of Mr Trump and Mr Netanyahu. They also set fire to American and Israeli flags.

Many expressed outrage at Gulf Arab countries they see as complicit in the plan unveiled on Tuesday.

Representatives from the Arab countries of Bahrain, Oman and the United Arab Emirates were present at the White House on Tuesday but there were no Palestinian representatives.

Hundreds of thousands of Palestinians fled or were forced out of what is now Israel during the 1948 war around its creation.

Those refugees and their descendants now number around five million and are scattered across the region.

Palestinians believe they have the “right of return” to former properties, something Israel has always rejected, saying it would destroy Israel’s Jewish character.

The White House plan says “there shall be no right of return by, or absorption of, any Palestinian refugee into the state of Israel”.

It says refugees can live in the state of Palestine, become citizens of the countries where they live or be absorbed by other countries, adding the US will try to provide ”some compensation” to refugees.

“It is shameful and it makes you want to cry,” Ms Warde said.

“The collusion by Arab countries is what makes us want to cry even more.

“Whether from Bahrain or the UAE, we would never have thought an Arab country would take this stance.”

Many said a return to armed conflict was now inevitable.

“Neither Trump nor Netanyahu can decide for the 13 million Palestinian people that this land belongs to Israel,” said Mahmoud al-Haj, whose family hails from what is now the Israeli city of Safed.

“This is the land of our grandfathers and we will not give up Palestine, which will only come back through resistance and arms.”