A total of 43 people were killed when part of the Morandi Bridge collapsed. 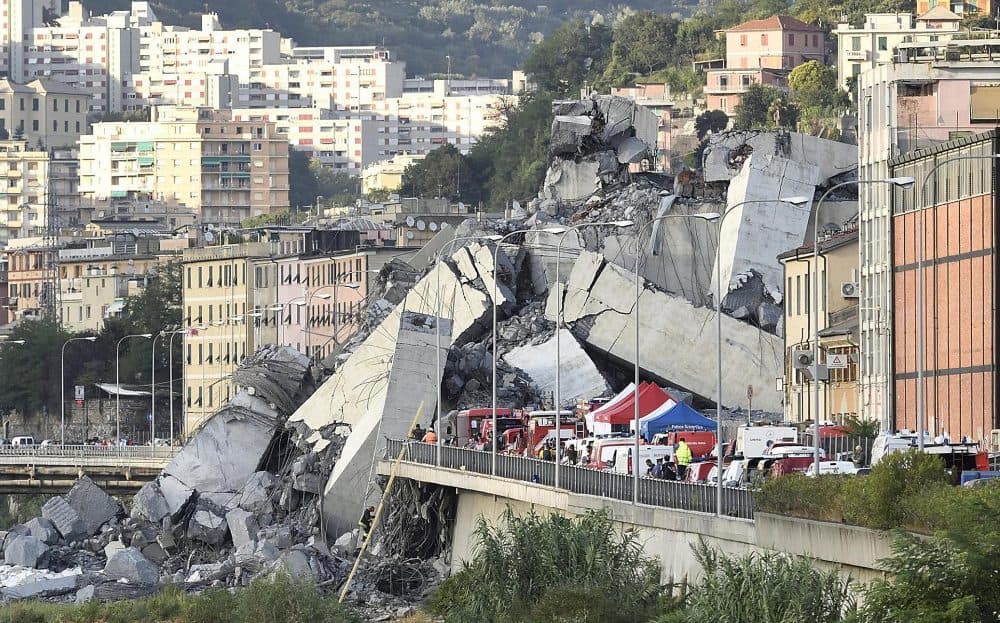 Italy’s president has inaugurated a replacement bridge in Genoa despite the event being boycotted by families of 43 people killed when part of the original structure collapsed.

Two years ago this month, a stretch of the Morandi Bridge suddenly gave way in a violent rainstorm, sending vehicles plunging to the dry riverbed below.

The new structure — a key artery for the north-western Italian port city — was erected thanks to round-the-clock construction, even during the Covid-19 pandemic.

Rain drenched the new bridge, stopping just before the ceremony which started with the reading out of the names of the dead.

“We are suspended between grief” over the tragedy and “pride for the construction of the new bridge”, its renowned architect, Renzo Piano, told his fellow Genoese in a speech.

Mr Piano said he decided to give the new San Giorgio Bridge a low-key architectural style as if the span “is asking permission” to cross the river.

The families of the dead agreed to meet President Sergio Mattarella privately but announced they were skipping the actual ceremony.

They are upset that the company which maintained Morandi Bridge will still run the new structure for a while — even though poor maintenance is being investigated as a possible cause of the collapse.

“No one can give us back our dead,” Egle Possetti, who leads an association of the bridge victims’ families, said.

Ms Possetti, who lost a sister and other family members in the collapse, said she hoped attention would stay focused on the ongoing criminal investigation into the collapse.

During the ceremony, Mayor Marco Bucci had words for those who lost loved ones in the collapse. “Our message to them is very simple. This must never happen again,” the mayor said.

Nine Italian air force jets flew in formation over the bridge, trailing smoke in the red, white and green colours of the country’s flag.

Firefighters who battled to extract survivors and bodies from tons of twisted metal also decided to boycott the ceremony in solidarity with the families, Sky TG24 said.

Prosecutors are probing what caused Morandi Bridge to collapse on August 14 2018, on the eve of Italy’s biggest summer holiday.

Riccardo Morandi, the engineer who designed the bridge built in the 1960s, had recommended continual maintenance to remove rust, especially from the corrosive effect of sea air in the Mediterranean port city, and pollution’s toll on concrete.

Prosecutors have said they are investigating to see whether proper maintenance was consistently carried out over the years on the heavily used span.

Earlier this summer, the Italian government forged a deal in which the Benetton fashion family agreed to exit Autostrade per l’Italia, the company that manages and maintains many of Italy’s highways and bridges.

Its highway concession had included Morandi Bridge. But that exit will take some time, as Autostrade becomes a public company under the deal and pays 3.4 billion euros in compensation.

Mr Piano designed the bridge to evoke a ship’s bows, to honour the city’s proud maritime history. The span has 43 lamps in memory of the dead.