Perhaps the most showy appearance at the Seoul WInter Olympics opening ceremony was that of the North Korean leader Kim Jong-Un, accompanied by the President of the United States Donald Trump.   대박ㅋㅋㅋ pic.twitter.com/eHQ8g59h87 — 김여울 (Yeo-ul Kim) (@adore13) February 9, 2018 Or rather an Australian Kim Jong-Un impersonator called Howard and an American Donald […] 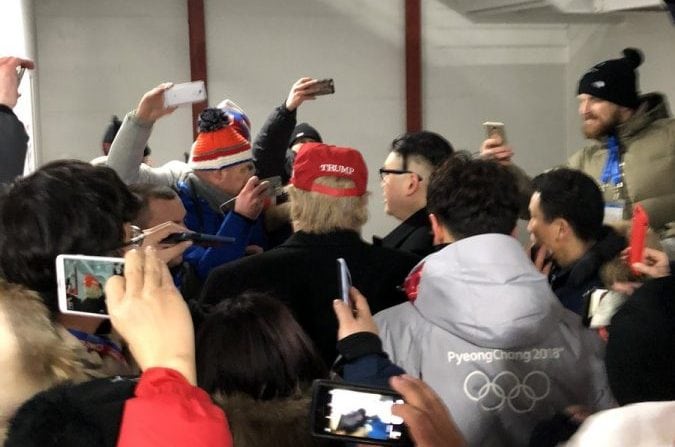 Perhaps the most showy appearance at the Seoul WInter Olympics opening ceremony was that of the North Korean leader Kim Jong-Un, accompanied by the President of the United States Donald Trump.

Though as the world’s media snapped away at them the pair were rather unceremoniously ejected from the opening ceremony after causing a commotion.

Here is video of the Donald Trump and Kim Jung Un impersonates being asked to leave and escorted back to their seats #pyeongchangOlympics2018 #WinterOlympics2018 pic.twitter.com/vMIsP1Gm3b

The impressionists wanted “to show the world this is what peace can loook like when two leaders get along,” said Howard, adding:

“Donald Trump and Kim Jong-Un they will – if they talk – they will probably get along, because in my opinion they are pretty much the same people.”

These Trump + Kim Jong Un impersonators caused quite a stir shortly after Team USA marched in the Parade of Nations. pic.twitter.com/oET7j2skMy

Trump impersonator met Kim Jong Un impersonator, and they left peacefully together. The Olympic Spirit at its best. https://t.co/cFsiCZEXJw