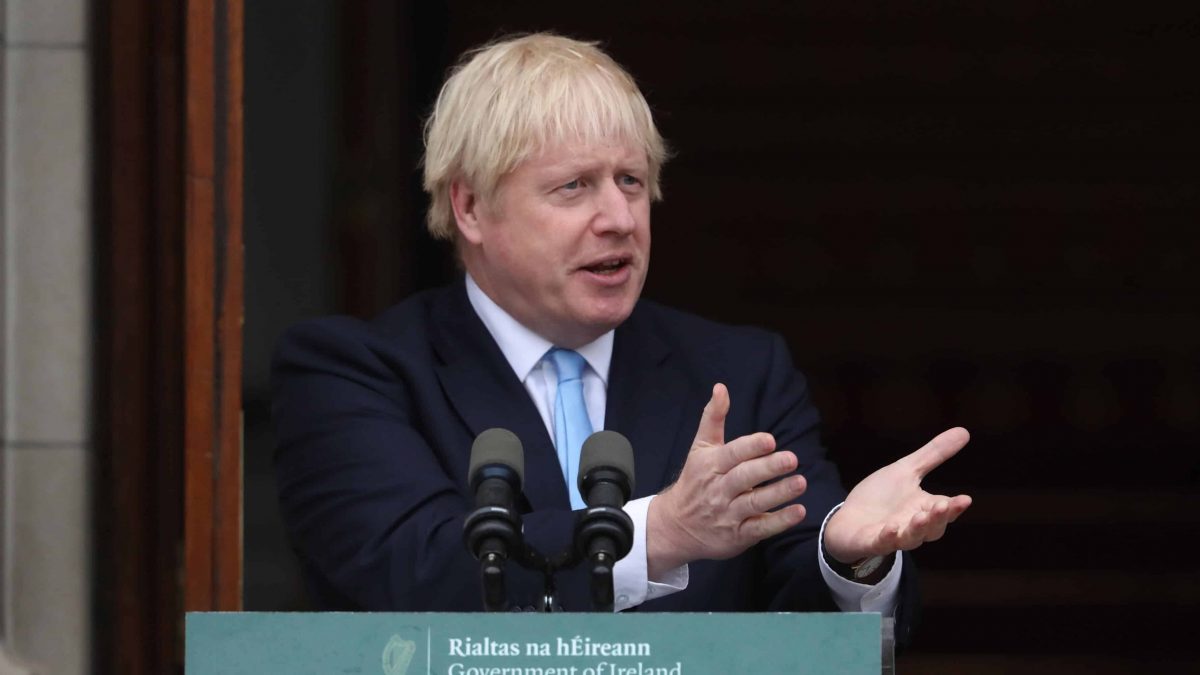 Giving a press conference with Irish Taoiseach Leo Varadkar, Boris Johnson looked distinctly uncomfortable as his lack of a solution to the Irish border backstop that prevents him seeking a withdrawal deal with the EU became apparent.

The Prime Minister squirmed as journalists quizzed him about what alternative he would offer and how he would keep Irish peace secure.

One reporter referred to Johnson’s vow that he would rather die in a ditch than not deliver Brexit on October 31 and asked: “Prime Minister when you talk about people being found ‘dead in ditches’ there’s a sense in this country that you really don’t understand what’s at stake here.

“When is the last time you did actually go to the border? Have you crossed the open border like ministers from 12 EU countries have? Do you still think that it’s like crossing from Camden to Islington?

“Given that you’ve lost your working majority in the House of Parliament, will you be held ransom by the DUP in the same way Theresa May was?”

But Johnson laughed off this suggestion and appeared to roll his eyes at the question.

The Irish premier Leo Varadkar appeared in stark contrast very measured as he warned Johnson that protecting peace process has to be a top priority.

He told reporters he was sceptical that any new breakthroughs would be found and explained to Johnson that a no-deal Brexit would cause severe disruption in the UK and Ireland.

Speaking before his meeting with Boris Johnson in Dublin on Monday, the Taoiseach said he believed a no-deal Brexit is possible, and would cause severe disruption for British and Irish people alike.

“The people of this island, North and South, need to know that their livelihoods, their security and their sense of identity will not be put at risk as a consequence of a hard Brexit,” he told Mr Johnson during the press conference.

“The stakes are high.

“Avoiding the return of a hard border on this island and protecting our place in the single market are the Irish Government’s priorities in all circumstances.

“We must protect peace on the island and the burgeoning success of the all-island economy.

“This is why the backstop continues to be a critical component of the Withdrawal Agreement, unless and until an alternative is found.”

“No such thing as just getting it done”

In a reality check for the Prime Minister, Mr Varadkar said: “The story of Brexit will not end if the United Kingdom leaves on October 31 or even January 31 – there is no such thing as a clean break. No such thing as just getting it done. Rather, we just enter a new phase.

“We will have to get back to the negotiating table. When we do, the first and only items on the agenda will be citizens’ rights, the financial settlement and the Irish border.”

He went on to tell Mr Johnson that negotiating trade agreements with the EU and US and securing their ratification in less than three years is going to be a “Herculean” task.

“We want to be your friend and ally, your Athena, in doing so,” he said.

“The manner in which you leave the EU will determine if that’s possible.

“But what we cannot do, and will not do, is replace a legal guarantee with a promise.”

Lord Peter Hain, former Secretary of State for Northern Ireland slammed Johnson’s performance and said it was apparent the PM is unable to negotiate a deal. He said: “Boris Johnson today claimed to have an ‘abundance’ of new proposals for how to avoid a hard border in Ireland, but yet again he couldn’t name a single one.

“Meanwhile he has cut the number of people working on negotiations with the EU in the Cabinet Office down to just four, and he hasn’t even bothered to visit the Northern Ireland border as either Foreign Secretary or as Prime Minister to see for himself the problems leaving the EU will create.

“The reality is clear – Johnson has no intention of trying to get a deal. Instead he is using every trick in the book to try to force through a destructive and undemocratic No Deal which is the complete opposite of the ‘great deal’ he used to promise Britain would get.

“The Irish Taoiseach, Leo Varadkar, is quite right to say that the ‘clean-break Brexit’ Johnson speaks of is a total fantasy. Crashing out of the EU with No Deal would resolve nothing, would put the UK in an extraordinarily weak negotiating position and would mean the endless Brexit crisis continuing for years and years to come.

“The only democratic way to resolve this crisis is to give the public the final say with a People’s Vote.”

Little evidence Johnson trying to find a deal with the EU

Mr Johnson’s insistence he wants to see a deal follows the resignation at the weekend of work and pensions secretary Amber Rudd, who complained she had seen little evidence ministers were trying to find an agreement.

Standing alongside Mr Varadkar, Mr Johnson said that a no-deal Brexit would represent a “failure of statecraft” by all concerned.

“I want to find a deal. I have looked carefully at no-deal. Yes, we could do it, the UK could certainly get through it, but be in no doubt that outcome would be a failure of statecraft for which we would all be responsible,” he said.

“I would overwhelmingly prefer to find an agreement. I do believe that a deal can be done by October 18 so let’s do it together.”

While he did not underestimate the “technical problems” involved in resolving the issue of the Irish border, he said the UK was ready to bring forward proposals to address the “full range of issues”.

They included the “electronic pre-clearance” of goods and the “unity” of the island of Ireland for agri-foods.

“Strip away the politics and at the core of each problem you find practical issues that can be resolved with sufficient energy and a spirit of compromise.”

Mr Varadkar said that he was willing to work with the Prime Minister as a “friend and ally” but said that Ireland was not prepared to accept the replacement of a “legal guarantee with a promise”.

“Avoiding a return to a hard border is the priority of this government,” he said.

“We are open to all alternatives legally workable but we have not received such to date.”

Asked about the situation in the Commons, the PM said: “We will come out on October 31, and I’m sure that parliamentarians will see the wisdom of doing that and respecting, honouring, the referendum result – the democratic referendum result.

“And, I’m absolutely undaunted by whatever may take place in Parliament.”

The comments came as Mr Johnson was expected to ramp up the pressure on MPs to back a snap general election or face five weeks of watching the Brexit negotiations from the sidelines.

Parliament was scheduled to be suspended under the Prime Minister’s orders on Monday, in a move that would halt all business in the Commons until October 14.

But Mr Johnson will present MPs with a way out of an enforced holiday by giving them another vote on holding a general election before a final decision to prorogue is taken.

An Opposition law, dubbed the Benn Bill after Labour MP Hilary Benn, that would extend the Brexit deadline until January 2020 is expected to receive Royal Assent before prorogation kicks in, but MPs would be thrown out of Parliament almost immediately afterwards and face a nervous wait to see whether Mr Johnson will obey the legislation.

Mr Varadkar added that both leaders have a shared desire to see the restoration of the devolved administration at Stormont, which has been deadlocked between the two main parties over equality issues.

“The Tanaiste (Simon Coveney) and Secretary of State (Julian Smith) are already working closely together on that,” Mr Varadkar said.

“The Good Friday Agreement is proof that old foes can come together to deal with the most intractable of problems. As co-guarantors of the Agreement, I look forward to exploring with you, how working with the Northern Ireland parties, we can restore powersharing and devolution.”

The Taoiseach, who has said he would be open to an extension to Brexit if there is good reason, added that more talks will be needed in any circumstance which the UK leaves the EU.

Mr Johnson promised that the UK would not impose border checks, but refused to be drawn on the particulars of any plan to avoid this scenario.

He said: “As someone who went to the border several times before the Good Friday Agreement and shuddered to see watch towers on UK soil, I can say now, as I’ve said many times before, the UK will never, ever institute checks at the border, and I hope our friends in the EU would say the same.

“Can we uphold the Belfast Good Friday Agreement in all its particulars?

“Again, I say the answer is yes, and our commitment in the UK to the peace process is unshakeable.”

Both men agreed towards the end of the press conference that they were not expecting “any big breakthroughs” at their meeting.