President Hassan Rouhani said on Tuesday Iran would not wage war against any nation, sounding a note of restraint after the United States announced more troop deployments to the Middle East. Fears of a confrontation between Iran and its long-time foe the United States have mounted since Thursday when two oil tankers were attacked near […] 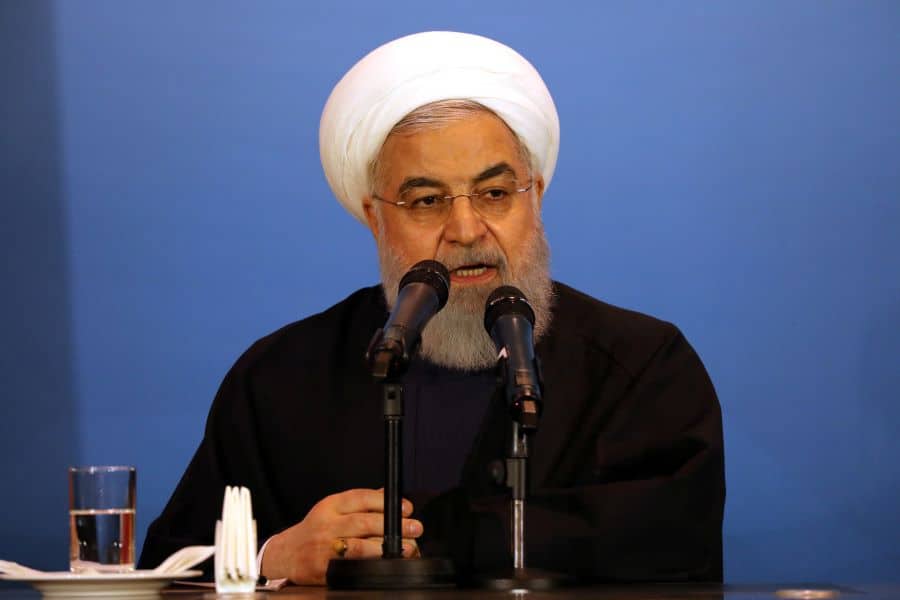 President Hassan Rouhani said on Tuesday Iran would not wage war against any nation, sounding a note of restraint after the United States announced more troop deployments to the Middle East.

Fears of a confrontation between Iran and its long-time foe the United States have mounted since Thursday when two oil tankers were attacked near the strategic Strait of Hormuz shipping lane, which Washington blamed on Tehran.

Iran denied involvement in the attacks and said on Monday it would soon breach limits on how much enriched uranium it can stockpile under a 2015 nuclear deal, which had sought to limit its nuclear capabilities.

Exceeding the uranium cap at the heart of the accord would prompt a diplomatic crisis, forcing the other signatories, which include China, Russia and European powers, to confront Iran.

The standoff drew a call for caution from China. Its top diplomat warned that the world should not open a “Pandora’s Box” in the Middle East, as he denounced U.S. pressure on Iran and called on it not to drop out of the landmark nuclear deal.

Russia urged restraint on all sides.

In a speech, Rouhani dismissed U.S. efforts to isolate Iran as unsuccessful and suggested the U.S. administration of President Donald Trump was inexperienced in international affairs.

But he said Iran did not seek conflict.

On Monday, Iranian officials made several assertive comments about security, including the secretary of Iran’s Supreme National Security Council, Ali Shamkhani, who said Tehran was responsible for security in the Gulf and urged U.S. forces to leave the region.

Acting U.S. Defense Secretary Patrick Shanahan on Monday announced the deployment of about 1,000 more troops to the Middle East for what he said were defensive purposes, citing concerns about a threat from Iran.

The new U.S. deployment is in addition to a 1,500-troop increase announced last month in response to tanker attacks in May. Washington previously tightened sanctions, ordering all countries and companies to halt imports of Iranian oil or be banished from the global financial system.

Iran’s announcement on Monday that it would soon breach limits on how much enriched uranium it can stockpile under the deal was denounced by a White House National Security Council spokesman as “nuclear blackmail.”

The move further undermines the nuclear pact, but Rouhani said on Monday the collapse of the deal would not be in the interests of the region or the world.

The nuclear deal seeks to head off any pathway to an Iranian nuclear bomb in return for the removal of most international sanctions.

Speaking in Beijing, Chinese State Councillor Wang Yi said the United States should not use “extreme pressure” to resolve issues with Iran.

Wang told reporters China, a close energy partner of Iran, was “of course, very concerned” about the situation in the Gulf and with Iran, and called on all sides to ease tension.

“We call on all sides to remain rational and exercise restraint, and not take any escalatory actions that irritate regional tensions, and not open a Pandora’s box,” Wang said.

“In particular, the U.S. side should alter its extreme pressure methods,” Wang said. “Any unilateral behaviour has no basis in international law. Not only will it not resolve the problem, it will only create an even greater crisis.”

Wang also said the Iran nuclear deal was the only feasible way to resolve its nuclear issue, and urged Iran to be prudent.

European Union foreign policy chief Federica Mogherini said the EU would only react to any breach if the International Atomic Energy Agency formally identified one.

The Trump administration says the deal, negotiated by Democratic President Barack Obama, was flawed as it is not permanent, does not address Iran’s missile programme and does not punish it for waging proxy wars in other Middle East countries.