Bruno Dey, 93, was pushed into the courtroom in Hamburg in a wheelchair. 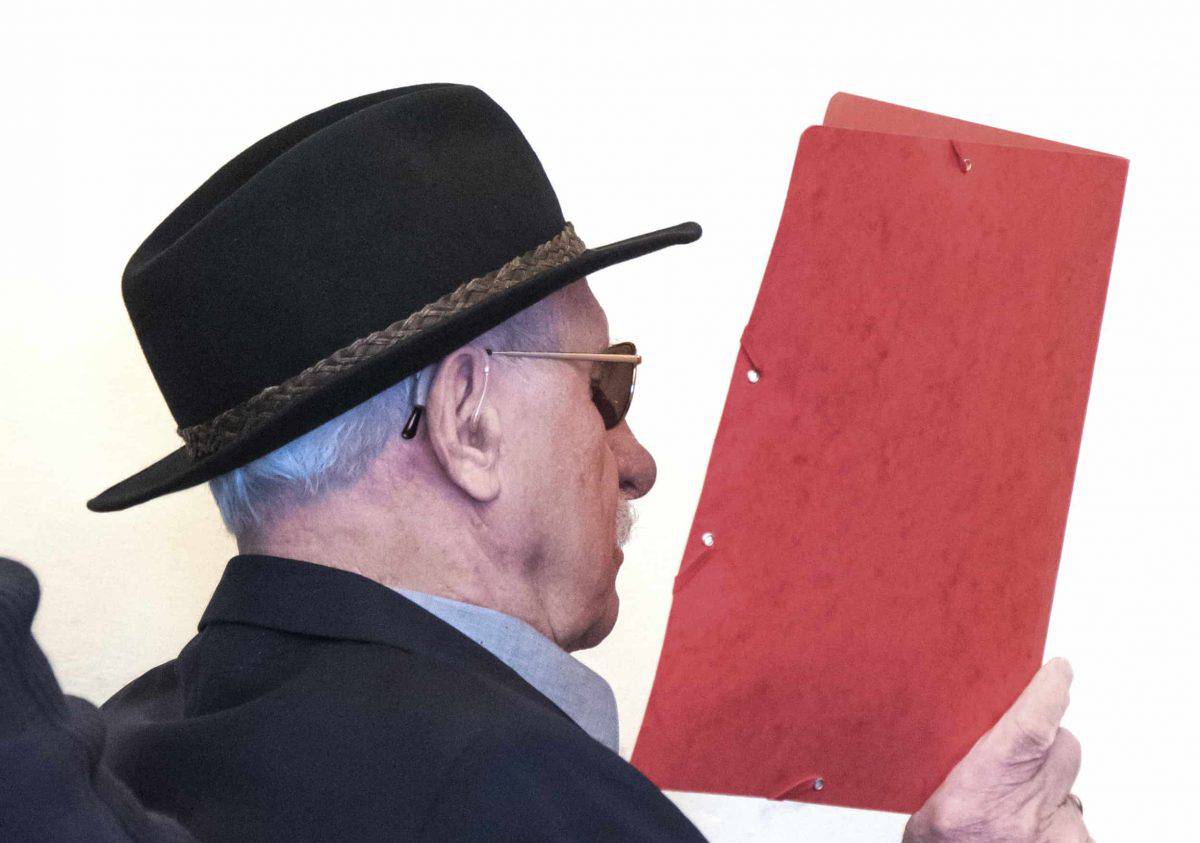 93-year-old former SS guard Bruno Dey in the concentration camp Stutthof near Danzig is sitting in the regional court in Hamburg, Germany, Oct.17, 2019. The prosecution accuses the 93-year-old man of aiding and abetting the murder of 5230 people. The defendant was only 17 or 18 years old at the time of the crime. That's why the trial takes place in front of a juvenile delinquency chamber. About 25 survivors of the concentration camp appear as joint plaintiffs. (Daniel Bockwoldt/dpa via AP)

A 93-year-old former Nazi concentration camp guard has gone on trial in Germany accused of 5,230 counts of accessory to murder.

Bruno Dey was pushed into the courtroom in Hamburg in a wheelchair, accompanied by one of his daughters.

He wore a wide-brimmed hat and held a red folder in front of his face to shield it from photographers.

After they had gone, he dropped the cover to reveal a full head of neatly combed white hair and a moustache. He answered basic questions from Presiding Judge Anne Meier-Goering, such as his date and place of birth.

As prosecutor Lars Mahnke then detailed how Jews were gassed, shot and starved to death as part of the “systematic killing” in the Stutthof camp where he stood guard 75 years ago, he showed little expression but appeared to be listening attentively.

While there is no evidence of Dey’s direct involvement in a killing in Stutthof, prosecutors argue that as a camp guard from August 1944 to April 1945 he aided in all the killings that took place during that period as a “small wheel in the machinery of murder”.

“The accused was no ardent worshipper of Nazi ideology,” prosecutors argue in the indictment. “But there is also no doubt that he never actively challenged the persecutions of the Nazi regime.”

Dey, a baker by training, does not deny being a guard at Stutthof. He gave wide-ranging statements to investigators about his service, saying that he was deemed unfit for combat in the regular army in 1944 at the age of 17, so was drafted in to an SS guard detachment and sent to Stutthof, not far from his home town near Danzig, which is today the Polish city of Gdansk.

Dey’s attorney Stefan Waterkamp questioned why his client was being prosecuted now, saying that before a recent change in German legal reasoning, “nobody was interested in the simple guards”.

“Where does responsibility end?” he asked the court in his opening statement. “That is the question this trial must answer.”

In recent years, prosecutors have successfully convicted former death camp guards using the argument that by helping to operate camps like Auschwitz and Sobibor, they were accessories to the murders there.

The 2015 conviction of former Auschwitz guard Oskar Groening on such reasoning was upheld by a German federal court, solidifying the precedent.

In Dey’s case, the reasoning is being applied to a concentration camp rather than a death camp.

Prosecutors have expressed confidence it still pertains, since tens of thousands of people were killed in Stutthof even though — unlike at the death camps — the site’s sole purpose was not murder.

Even in concentration camps “it was almost a certain death sentence,” said Efraim Zuroff, the head Nazi hunter at the Simon Wiesenthal Center in Jerusalem who attended the opening of the trial.

Mr Zuroff, who helped locate nearly two dozen Stutthof survivors for the case, rejected Mr Waterkamp’s suggestion that Dey should not be prosecuted because higher-ranking Nazis were never brought to trial.

“Just because more senior criminals got away with a crime doesn’t mean that the more minor criminals are not guilty,” he said.

Stutthof was established by Nazi Germany in 1939 east of Danzig and was initially used as the main collection point for Jews and non-Jewish Poles removed from the city.

From about 1940, it was used as a so-called “work education camp” where forced labourers, primarily Polish and Soviet citizens, were sent to serve sentences and often died. Others incarcerated there included criminals, political prisoners, homosexuals and Jehovah’s Witnesses.

From mid-1944, when Dey was posted there, it was filled with tens of thousands of Jews from ghettos being cleared by the Nazis in the Baltics as well as from Auschwitz, and thousands of Polish civilians swept up in the brutal suppression of the Warsaw uprising.

In the end, more than 60,000 people were killed there by being given lethal injections of gasoline or phenol directly to their hearts, shot or starved. Others were forced outside in winter without clothes until they died of exposure, or were put to death in a gas chamber.

About three dozen survivors and their relatives have joined the trial as co-plaintiffs, as allowed under German law, including New York filmmaker Ben Cohen, whose grandmother survived Stutthof but whose great-grandmother died in the camp’s gas chamber during the time Dey served as a camp guard.

Attending the opening, Cohen said there could never be full justice for his family, but just the fact that German authorities are pursuing the case is an important signal.

He said his grandmother, Judy Meisel, who was taken to Stutthof aged 15, hoped Dey would testify to help shine some light on how something like the Holocaust could occur. Ms Meisel, 90, now lives in Minneapolis and will not be able to attend the trial herself, Cohen said.

“These were people who were convinced they should murder every Jew. How does a person do that?” Cohen said. “We don’t hold him accountable for everything that happened at Stutthof but he could do a lot by talking about what went on there as a guard.”

Dey himself told prosecutors his SS comrades talked of the “extermination of the Jews” and said he had “done people wrong” by serving there.

“I did not know why they were there,” Dey told prosecutors. “I knew well that they were Jews who had committed no crime, that they were only there because they were Jews. And they have the same right to live and to work like any other person. But it was just that Hitler or his party … had something against the Jews.”

In deference to his age, trial sessions are being limited to two hours a day, and are scheduled to be held only twice a week.

Because Dey was 17 when he started serving at Stutthof, he is being tried in juvenile court and faces a possible six months to 10 years in prison if convicted.