Anastasiia Lenna posted a video of herself shooting an assault rifle on her Instagram story as Russian troops encircled Kyiv. 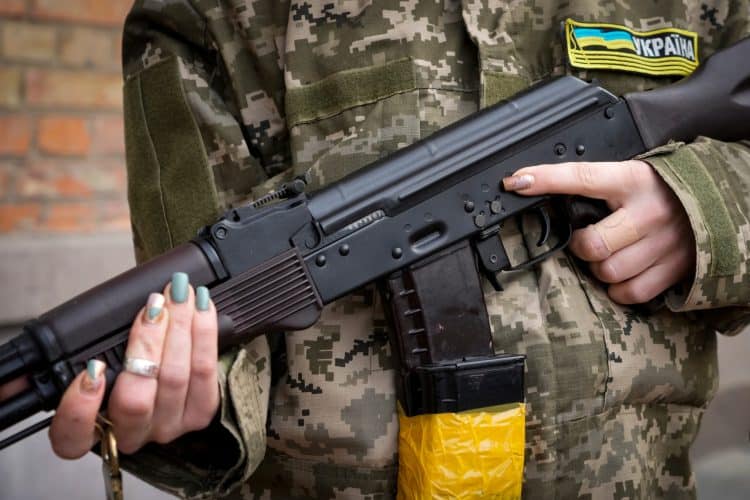 A former Miss Ukraine has joined thousands of fellow citizens in the battle against invading Russian troops.

Anastasiia Lenna, who competed for Ukraine in the Miss Grand International beauty contest in 2015 when she was 24, posted a video on Sunday of herself firing an assault rifle at targets in a shooting range.

The Kyiv-based model and TV personality posted the clip in a much-viewed Instagram story.

She wrote in the caption: “Training. The invaders will die on our land! All world see this! Wait and see what will happen.

“… Anyone who wants to join the defence of security in Europe, the world can come and stand side by side with Ukrainians against the invaders of the 21st century. Ask your embassy.”

Earlier this week, Lenna uploaded another photo of herself to Instagram in combat fatigues, brandishing a large firearm.

She has made frequent critical posts about the Russian invasion since Vladimir Putin sent troops into Ukraine on Thursday.

Echoing Ukraine’s president, Volodymyr Zelensky, she called on people around the world to join Ukraine’s army to help them fight off the Russians.

Lenna also shared a photo of Zelensky, describing him as a “true and strong leader”.

In another post, she joked: “Our army is fighting in such a way that Nato should apply for entry into Ukraine.”

Meanwhile, a Ukrainian MP who has taken up arms to defend the country’s capital city from the Russian invasion has said she will do so “as long as needed”.

Kira Rudik, the leader of the Voice party in the Rada parliament, said she was confident she should could shoot a Russian soldier if one came to her home

Speaking to BBC Radio Scotland on Monday, the MP said: “I don’t have any plans to leave, this is my city, this is my country, and I plan to defend it for as long as will be needed.

“There is no chance that some Russian crazy dictator would be able to push me away from where I live and where I love.”

Rudik is one of many in Ukraine who have taken up the offer of arming themselves, with military forces looking to bolster key positions.

“We received rifles in the Ukrainian parliament and for the last couple of days I was training to use it, so right now I’m pretty confident I would be able to shoot somebody if they come to my home,” she said.

“I assembled a resistance crew which now consists of 15 people, and we were able to stand up for ourselves and help our army patrol the streets.”