“It is a deeply inhumane way to treat a body of staff entrusted to keep British ministers and civil servants safe.” 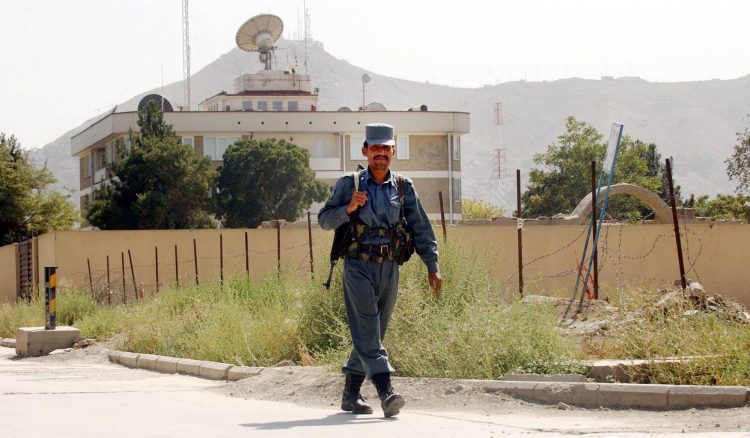 A guard walks in front of the British Embassy in Kabul, Afghanistan. Credit;PA

More than 150 men who worked at the British embassy in Afghanistan have yet to be relocated to the UK, it has been reported.

The BBC has reportedly seen and verified a list of the more than 150 men who worked at the embassy and still live in the country, with some claiming to have been beaten by the Taliban because of their previous occupations.

The broadcaster says the men had worked for the global security company GardaWorld.

The Government announced this week it was opening the two remaining parts of the Afghan Citizens Resettlement Scheme (ACRS), with the new pathways allowing at-risk British Council and security contractors to be resettled in the UK and the United Nations High Commissioner for Refugees (UNHCR) to also refer refugees for resettlement.

Up to 20,000 refugees are expected to arrive under the ACRS, with individuals and families who were brought to safety under Operation Pitting, the initial British military rescue mission, prioritised in the first part of the scheme.

Sarah Magill, director of the human rights charity Azadi, told the BBC there had been no explanation why it had taken so long to begin the next process.

“Through their inaction the government has caused incalculable trauma,” she said.

“It is a deeply inhumane way to treat a body of staff entrusted to keep British ministers and civil servants safe.”

A UK government spokesman said: “Our staff worked tirelessly to evacuate over 15,000 people to safety from Afghanistan within a fortnight in the biggest and fastest emergency in recent history.

“We are still working hard to assist the people of Afghanistan, having already helped over 4,600 individuals to leave the country since the end of the military evacuation.

“We have opened the Afghanistan Citizen Resettlement Scheme, one of the most ambitious resettlement programmes in the world and the first bespoke scheme in Europe to begin resettling evacuees and individuals.”

Related: Fury as No 10 not ruling out human rights convention withdrawal as Bart Simpson meme sums it up