It took eight police officers to bundle Yelena Osipova, 77, away for protesting Putin's war in Ukraine. 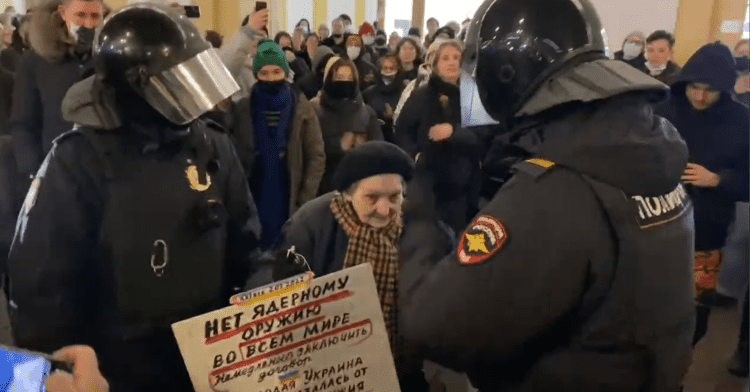 An elderly woman who took part in an anti-war protest in St Petersburg to object to Russia’s invasion of Ukraine has been arrested.

Yelena Osipova, 77, a well-known activist and artists who survived Nazi Germany’s assault of Leningrad as a baby, brandished anti-war placards urging soldiers to lay down their arms at a protest on Wednesday.

But the Russian authorities quickly detained her as the crowd shouted anti-war slogans. Thousands of dissenting Russians have reportedly been detained so far.

Despite a brutal crackdown on protest, a significant number of Russians have taken to the streets of Moscow, St Petersburg and other cities to voice their opposition to Vladimir Putin’s assault on Ukraine.

The video quickly went viral online, with social media users calling the incident “spine-tingling”, while others demanded: “What sort of government is scared of a little old lady holding placards?”

“I have been angry about everything going on but I’ve been collected, but this…this enrages me,” one Reddit user wrote.

They added: “Imagine sending an old woman to jail, who survived not only the bloodiest campaign of the Nazi invasion, but also the bloodiest battle of your country’s entire history.”

It comes as Ikea became the latest Western company to halt operations in Russia as it temporarily closed all stores and factories across the country in a move impacting 15,000 workers.

The Swedish flatpack furniture giant has shuttered its 17 outlets across Russia, but said it would keep its Mega shopping centres open to allow access to essential retailers, such as food shops and pharmacies.

Its decision will halt production at three manufacturing sites in the country, while it will also pause all export and import in and out of Russia and Belarus.

The move sees it join a growing list of firms suspending activities in Russia in response to the war in Ukraine, following similar announcements by online fashion group Asos, as well as US tech giants Apple and Google and sportswear brand Nike.

Brand owner Inter Ikea and store owner Ingka Group said they had “secured employment and income stability” for the workers directly impacted by the decisions.

Ikea said: “The war has a huge human impact already. It is also resulting in serious disruptions to supply chain and trading conditions.

“For all of these reasons, the company groups have decided to temporarily pause Ikea operations in Russia.”

Related: Britain will not sanction Russian oligarchs ‘for weeks and months’

Shocking: ‘Energy bills’ included as a prize on This Morning’s Spin to Win