The President of the United States also suggested his Miami golf course could stage next G7 summit. 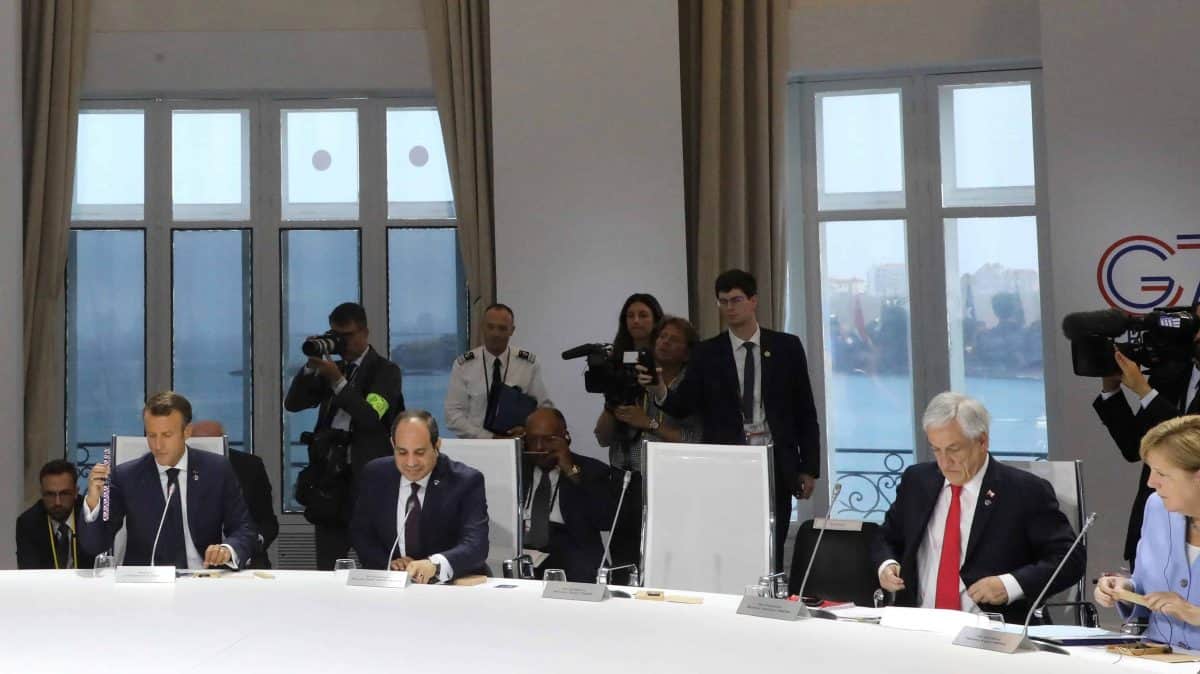 US President Donald Trump missed discussions on climate change and urgent steps to deal with rainforest fires in the Amazon with other world leaders at the Group of Seven summit in France.

Trump was scheduled to attend Monday’s session on climate, biodiversity and oceans, but his chair was empty during a portion of the meeting reporters were allowed to witness.

Trump aides earlier in the summit claimed what they called “niche issues” such as climate change and gender equality were being discussed just to embarrass the US President.

When reporters asked the President if he had attended the session on climate change, he insisted: “We’re having it in a little while.”

He then refused to reply when a reporter explained that the meeting on climate had already finished.

French President Emmanuel Macron said that while Trump did not attend, his aides were there.

The US president started the morning behind schedule.

His meeting with German Chancellor Angela Merkel was delayed about two hours.

He then met with India’s prime minister Narendra Modi, where he was asked about attending the climate session.

He said it would be his next stop and that he wants clean air and water.

Trump is a climate change sceptic who once had claimed it is a hoax that was invented by the Chinese.

In a press conference later on Monday, Donald Trump somehow felt able to boast that he was the greatest environmentalist to ever be president.

Though when pressed on what people “should be doing about climate change,” and whether he is still a climate skeptic, the President refused to answer either question.

Instead Donald Trump stated rambling on, bragging about America’s “tremendous wealth.” “The wealth is under its feet,” boasted Trump, alluding to fossil fuels which he has championed while removing the US from the Paris climate accord.

He even bragged about giving controversial approval to drilling in Alaska’s Arctic National Wildlife Refuge- something previous administrations had avoided.

The G7 leaders without the US President pledged to back firefighting efforts in the rainforest with France’s Emmanuel Macron vowing similar action in Africa.

But Brazil’s President Jair Bolsonaro reacted viciously to the money pledged to help fight the rainforest fires in his country, insisting the G7 agreement on fighting the Amazon fires treats the region like a colony.

The response came in a tweet Monday morning after French President Emmanuel Macron announced that the Group of Seven had agreed on a 20 million US dollar firefighting fund as well as a long-term initiative to protect the rainforest.

Bolsonaro tweeted: “We cannot accept that a president, Macron, makes ludicrous and unnecessary attacks on Amazonia, nor that he makes his intentions with an idea of an ‘alliance’ of G7 countries to save the Amazon, as if we were a colony or someone’s territory.”

President Macron savaged the Brazilian president for “extraordinarily disrespectful comments” about his wife and reiterated that Bolsonaro had lied about commitments to deforestation.

Bolsonaro, in turn, said Macron’s “ludicrous and unnecessary attacks on the Amazon” were unacceptable and accused him of treating the region “as if we were a colony”.

Mr Macron also said on Monday that he was considering launching an international campaign to help sub-Saharan African countries fight fires raging in the area that are being compared to the Amazon rainforest fires.

Emmanuel Macron tweeted from the Group of Seven summit: “The forest is also burning in sub-Saharan Africa.

“We are studying the possibility of launching an initiative similar to what we just announced for the Amazon.”

The French President hosting the summit of world leaders said earlier on Monday that G7 nations are committing 20 million US dollars to countries in the Amazon region to help fight the fires and help with “re-forestation”.

Environmental groups have expressed concern about massive fires in African countries including Angola and DR Congo that are getting less attention than those in the Amazon, which have caused worldwide concern because of their potential impact on climate change.

Meanwhile Donald Trump who had dodged such trivial issues, raised an important one as the summit of G7 countries came to a close. Where should the world leaders meet next?

President Donald Trump insisted he has no interest in profiting from next year’s Group of Seven summit even as he talks up his private Miami-area golf course as a potential site.

He touted its acreage, its proximity to the airport, its restaurants and what he called its “magnificent” bungalows with “magnificent views”.

Still, he claims he wouldn’t “make any money” off the summit even though he still profits from his clubs.

Mr Trump said earlier on Monday that Doral would be the likely venue for next year’s summit, which the US is hosting.

He said: “I think having it in Miami is fantastic.”

He also spent the day tweeting that coverage of his behaviour at the G7 had been “fake news”:

Insisting newspaper reports that he had suggested nuking hurricanes to stop them were also untrue:

Retweeting bizarre allegations including a conspiracy theory that Democrat representative Ilan Omar, constant target of his bile currently, had married her own brother: