At least 235 are dead and 180 injured after militants launched a bomb and gun attack on a mosque in Northern Sinai, Egypt during Friday prayers. As the death tolls mounts, reports on one of the bloodiest terror attacks in Egypt’s history suggest that gunmen in four off-road cars opened fire on worshippers trying to […] 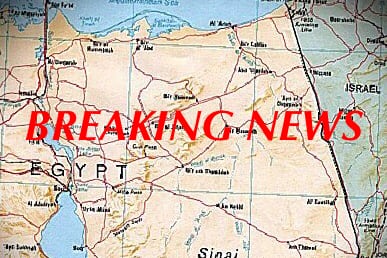 At least 235 are dead and 180 injured after militants launched a bomb and gun attack on a mosque in Northern Sinai, Egypt during Friday prayers.

As the death tolls mounts, reports on one of the bloodiest terror attacks in Egypt’s history suggest that gunmen in four off-road cars opened fire on worshippers trying to escape after an explosion at the al-Rawdah mosque in Bir al-Abd.

Other reports emerged of ambulances responding to the terrorist attack came under fire too.

The Egyptian government has been fighting an insurgency by Islamists linked to IS in the desert region, a conflict that has become much bloodier since President Mohammed Morsi was ousted four years ago.

Reports are suggesting that the terror group that carried out the attack on the Sufi-affiliated mosque 25 miles from the North Sinai provincial capital of el-Arish is linked to Islamic State (IS).

The Jihadist militants consider Sufi Muslims to be heretics.There have been attacks on Coptic Christians too.

Photos are emerging of bloodied bodies of worshippers in the mosque.

President Abdul Fattah al-Sisi met military and security chiefs to discuss a response to the shocking attack. He promised a brutal response to the attackers as the government announced a three day period of national mourning.

In a televised statement he branded the outrage “criminal” and “cowardly” and vowed that it “will not go unpunished”.

The British Ambassador John Casson said the “These attacks on people praying in mosques & churches only strengthen our determination to stand together, & defeat terrorism & hate.”

I am disgusted by the evil attack that killed & injured so many Egyptians in Sinai today. On behalf of the UK my deep condolences to all involved. These attacks on people praying in mosques & churches only strengthen our determination to stand together, & defeat terrorism & hate.

The Foreign Secretary also offered condolences to those affected by “a barbaric act.”

Deeply saddened by the abhorrent attack on a mosque in North Sinai, #Egypt. My sincere condolences to all those affected by such a barbaric act.

PM: Appalled by the sickening attack on a mosque in North Sinai. Condolences with all those in Egypt affected by this evil and cowardly act.

Horrible and cowardly terrorist attack on innocent and defenseless worshipers in Egypt. The world cannot tolerate terrorism, we must defeat them militarily and discredit the extremist ideology that forms the basis of their existence!