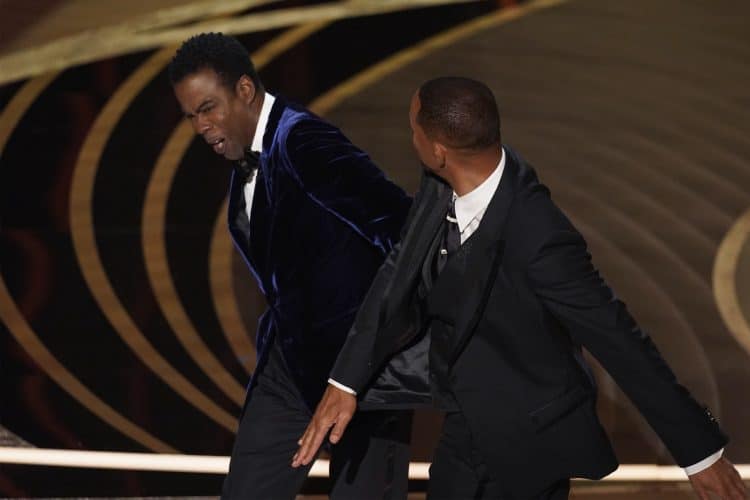 The Oscars were thrown into chaos after Will Smith stormed the stage and hit Chris Rock in the face after the comedian made a joke about his wife Jada Pinkett Smith, just minutes before Smith was named best actor at the ceremony.

The incident overshadowed a night which saw Coda, which features a predominantly deaf cast, named best picture, while Troy Kotsur made history as the first deaf male actor to win a gong and Sir Kenneth Branagh won the best original screenplay prize for his semi-autobiographical film Belfast.

The Magic Mike XXL star and Red Table Talk host has previously spoken about her struggles with alopecia and said it is what prompted her to shave her head.

However, Smith walked up on stage and appeared to hit Rock before returning to his seat and shouting twice: “Keep my wife’s name out of your f****** mouth.”

The altercation left Rock shocked and flustered as he tried to resume presenting the best documentary feature category.

The incident cast a cloud over Smith’s acceptance speech for his first ever Oscar, after he was named best actor for his portrayal of Richard Williams, the father of tennis stars Venus and Serena Williams, in King Richard.

Smith apologised to both the Academy and his fellow nominees, but not to Rock, as he collected his gong, joking that he “looks like the crazy father.”

Breaking down in tears, he said: “Richard Williams was a fierce defender of his family.

“In this time in my life, in this moment, I am overwhelmed by what God is calling me to do and be in this world.”

“You’ve got to be able have people disrespecting you and you’ve got to smile and pretend like that’s OK.”

“This is a beautiful moment and I’m not crying for winning an award, it’s not about winning an award for me, it’s about being able to shine a light on all of the people.”

He continued: “Art imitates life, I look like the crazy father, just like they said about Richard Williams, but love will make you do crazy things.”

The Academy later said that it did not “condone violence of any form”.

A tweet on the official Academy account said: “The Academy does not condone violence of any form.

“Tonight we are delighted to celebrate our 94th Academy Awards winners, who deserve this moment of recognition from their peers and movie lovers around the world.”

The Los Angeles Police Department (LAPD) said no report had yet been filed with the force following the altercation.

“LAPD investigative entities are aware of an incident between two individuals during the Academy Awards programme,” a spokesperson for the force told the PA news agency.

“The incident involved one individual slapping another. The individual involved has declined to file a police report.

“If the involved party desires a police report at a later date, LAPD will be available to complete an investigative report.”

Family drama Coda, which stands for child of deaf adults, was named best picture at the ceremony, while Kotsur made history as he was named best supporting actor.

Kotsur dedicated his gong to “the deaf community, the Coda community and the disabled community”, adding: “This is our moment”.

West Side Story star Ariana DeBose won the best supporting actress Oscar for her performance as Anita in the classic musical, 60 years after her predecessor in the role, Rita Moreno, earned the statuette herself.

DeBose added: “Now you see why Anita says I want to be in America because even in this weary world that we live in dreams do come true and that’s a heartening thing right now.”

The actress also paid tribute to Moreno, saying she “paved the way for tonnes of Anitas like me”.

Concluding her speech, DeBose added: “Imagine this little girl in the back seat of a white Ford Focus.

“Look into her eyes, you see an openly queer woman of colour, an Afro-Latina, who found her strength in life through art.

“And that’s what we’re here to celebrate.

Related: Fourth vaccine: Here’s who will be invited for a ‘Spring Booster’ this week