GPs are being forced to ration tubes for blood tests, with the BMA saying we are at a "very perilous point". 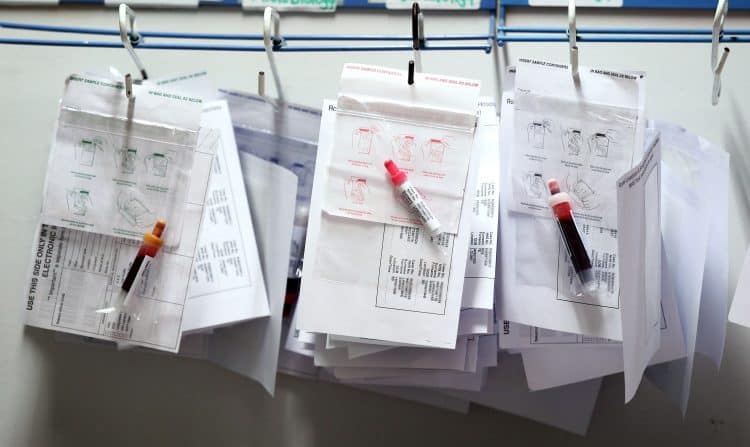 A shortage of blood tubes has put doctors and patients in a “terrible, unenviable position”, with GPs facing “difficult choices” about who gets blood tests, the British Medical Association has warned.

The BMA said shortages across hospitals and GP surgeries were “severe” and if the NHS did not reduce usage in the coming days “even the most clinically important blood tests may be at risk”.

All clinically necessary blood tests will go ahead but others have been scaled back.

When exactly did the UK turn into a failed state? https://t.co/1IOrHiNVte

The BMA urged doctors to follow guidance and carry out “only the most critical tests for the time being”.

A spokesman for BD said the NHS had been clear that the supply disruption was not limited to BD and affected other companies producing blood tubes.

He said BD took its responsibility to provide consistent product supply “very seriously” and that it was taking steps to “maximize supply” and divert products from other regions to help the UK.

“No doctor knowingly undertakes unnecessary blood tests and to now have to ration all those we are doing, as well as cancel hundreds more, goes against everything we stand for as clinicians.

“However, if we don’t try to follow the NHS guidance, it’s clear we will get to the point where even the most clinically urgent of blood tests may not be able to be done as we simply won’t have the tubes for the blood to go into.

“We are at a very perilous point and it’s surprising that NHS England hasn’t declared a critical incident given the very strong possibility that NHS organisations may temporarily lose the ability to provide lifesaving diagnostic testing.”

He called on NHS England to provide information for patients about the situation.

“Many GP practices – like mine – will now have to spend hours assessing which already scheduled tests can or cannot be cancelled and this takes time away from frontline patient care when it is most needed. Cancelling tests makes patients anxious and can mean a missed diagnosis,” Dr Wrigley added.

On Thursday, NHS bosses wrote to England’s GPs and hospital trusts warning that supply was “forecasted to become even more constrained over the coming weeks”.

“While it is anticipated that the position will improve from the middle of September, overall supply is likely to remain challenging for a significant period,” they wrote, adding that it was “important and urgent that demand is reduced as much as possible”.

Alternative products are being sought but it is expected to take time for these to be imported and delivered in volume.

Health bosses said all primary care and community testing must stop until September 17, except for “clinically urgent” testing.

Acute and mental health trusts must reduce their demand by a minimum of 25% for the period leading up to this date.

He added: “It is shocking that this situation has been allowed to develop – in particular, the apparent over-reliance on one manufacturer and the woeful lack of any kind of reserve supply.

“The manufacturers should also have to explain how they allowed stocks to run so low that patients will now suffer as a result.

“If we don’t get on top of this shortage – and quickly – then we could very easily end up in a catastrophic position, particularly in hospitals where patients come to serious harm.”

The NHS guidance recommends stopping vitamin D testing except in exceptional circumstances and deferring routine infertility testing unless the patient is over the age of 35.

A Department of Health and Social Care spokesperson said: “Patient safety is a top priority and we are working closely with NHS England, the devolved administrations, and NHS Supply Chain to minimise any impact on patient care.

“The health and care system continues to work flat out with the supplier and stakeholders to put mitigations in place, and restore normal supply, and there continues to be stock in place.”

The BD spokesman said there had been “unprecedented” demand for its vacutainer blood collection tubes in recent months.

This was driven by the need for tubes for testing for Covid-19 patients, as well as routine testing for procedures delayed due to the pandemic.

He added: “In addition to increased demand, we are seeing continued transportation challenges that have affected all industries, including port and transport capacity, air freight capacity and UK border challenges.

“Suppliers are also challenged to meet increased demand for raw materials and components.”

He said its blood tube plants around the world were running at “full capacity” to alleviate the backlog of orders.