One Taliban judge said that gay men will be executed by stoning or having walls toppled on them. 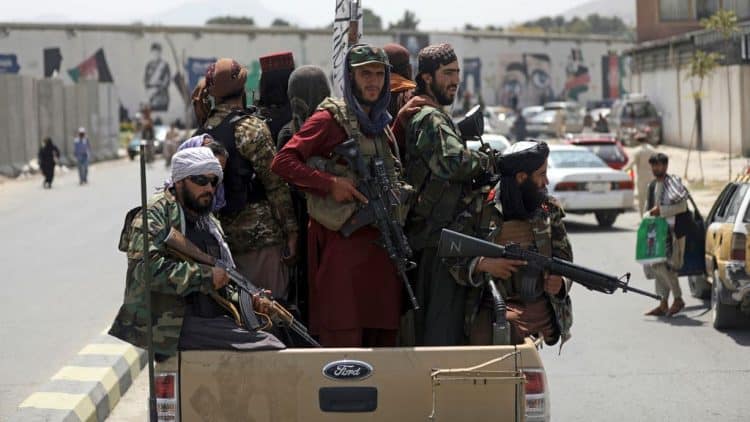 At first there is silence as the WhatsApp call connects. Then, with growing trepidation, a voice whispers: “My friends right now are very scared. They don’t know what will happen, but I know.”

The voice is that of Artemis Akbary, an Afghan LGBT+ activist now living in Turkey. Despite the uncertainty that the fall of Kabul has brought with it, he explains that the future for LGBT+ people is clear.

Speaking to The London Economic, he fears the situation for gay Afghans will worsen amid the Taliban’s takeover of Kabul, and believes they will choose to carry out death sentences for those in same-sex unions – a practice reported to have taken place between 1996-2001.

“Between 1996-2001, the Taliban murdered an 18 and 22 year-old couple for a same-sex relationship – and I believe they will repeat it again,” he explains.

“They are scared of the Taliban”

Homosexuality is already a punishable offence in Afghanistan, but Artemis says the fear within the community is palpable, with many of his friends forced to hide in their homes for fear of being discovered by Taliban fighters.

“My lesbian friend got married to one of her gay freinds because she is scared, and discovered that the Taliban forced young girls to marry their soliders,” he explains. “Because of that, she got married.”

“I also have a gay friend who lost his leg as a result of a bombing in Baghlan Province. He told me: ‘my life is really in danger’ and that if the Taliban understand ‘I am gay, I can’t run away.’”

He also describes how most of his transgender friends have been forced to stay indoors. “They’re not leaving their house because they are scared of the Taliban, because of their difference in appearance.”

But, as Artemis explains, in the case of one gay man’s gruesome experience, some people are unable to hide from the terrors that have become synonymous with Taliban-controlled Afghanistan.

Showing us messages on Facebook he’d obtained from a friend, Artemis reveals how the victim, whose name has been withheld to protect their identity, was raped and beaten after being duped by two Taliban fighters into meeting them.

After the brutal attack, the two militants then demanded his father’s phone number to inform him that his son was gay. “I ask my friend to tell me more about the Taliban soldier,” the victim’s friend explained in the message, “but he doesn’t say anything because he is scared.”

Social media as a tool of abuse

While the situation on the ground is intense for LGBT+ people, Artemis explains that the Taliban have also taken to attacking members of the community virtually, relying on platforms such as Facebook and Twitter.

“Most of my friends had Facebook accounts, but with the arrival of the Taliban, they deleted their accounts because they were scared,” he says.

Artemis, who is a producer and presenter for Radio Ranginkaman, a station for the Persian-speaking LGBT+ community, explains how he has received a number of reports and messages about fake accounts displaying Taliban flags that attack individuals for their sexuality.

He also reports how Taliban militants make fake profiles to deceive LGBT+ people by claiming they’re a member of the community.

“On social media, many accounts are attacking and threatening us,” he says. “For example, on Twitter they are attacking me, yet the platform does not report them nor block their accounts.”

Despite claims that it will be more lenient, vowing to respect women’s rights and forgive those who fought against them, Artemis says the Taliban are lying.

“The Taliban haven’t changed. Right now, they claim ‘we’ve changed, we are trying to say that we don’t have problems with women’s rights’, but they are deceiving the world – they will definitely kill homosexuals,” he tells us.

Artemis’s comments follow an interview in which a Taliban judge confirmed that gay men will be executed by having walls toppled on them once the militant organisation are back in power.

“This is the punishment for homosexuality,” he explains. “As I said before, if you look back to the years of 1996-2001 they executed many LGBT members.

“Many Taliban members said our government is based on Sharia law, and in Sharia the punishment of same sex relationship is death,” Artemis says.

Even at the height of a Western military presence in Afghanistan, many within the LGBT+ community did not live in safety.

A 2009 Justice Department report noted that “no death sentences are reported to have been dispensed with after the end of the Taliban rule but… this is still technically possible” under criminal law in the country.

For Artemis, LGBT+ people have been largely “forgotten” as Western nations ramped up efforts to evacuate civilians from Kabul, with attention now turning to remaining diplomats and service personnel.

It comes as a joint letter from the heads of Stonewall and Rainbow Migration called on Dominic Raab to provide “targeted support” for LGBT Afghans and “leadership in creating the conditions needed for LGBTQ+ Afghans to be evacuated”.

The groups added that it is essential that the United Nations’ refugee agency work with LGBT+ organisations to ensure that any “screening process” for asylum seekers is adequate.

But in an interview with ITV News, Kimahli Powell, chief executive at Rainbow Road said: “All signs indicate that people will face real danger in the weeks and months to come.”

“The consistent message from those individuals is that they are in fear of their lives, but what happens if they cannot escape?”

Elsewhere, a petition has been started calling on officials to “create a path to safety for all LGBTQ+ Afghans for resettlement in the UK”.

“If we truly believe in human rights in the UK, we need to help LGBTQ+ people escape a regime that will in all likelihood kill or seriously harm them,” David Connor, who created the petition, said.

“Gay people are outed and killed”

Nemat Sadat, one of the first native Afghans to come out publicly as gay, believes it will only be a matter of time before “gay people are outed and killed.”

Deemed a national security threat by the Afghan government after organising an underground movement to openly campaign for LGBTQIA+ rights, he fled to New York City.

Now living in San Diego, and amidst the chaos engulfing Kabul, Sadat has been tirelessly working with his Congressman, Scott Peters, and the State Department to find ways to rescue LGBT people.

“I’m trying to help LGBT Afghans get evacuated on the chartered flights that are airlifting expats and Afghan allies out of Afghanistan until the end of this month,” he says.

“I started the process earlier this week after the Taliban took over and I decided that I needed to help as many members of the community leave on one of the evacuation flights.

“I’m trying to evacuate 325 LGBTQ people out of Afghanistan. But it’s a cumbersome process,” he tells us.

Even though he received an approval list from the State Department, around half of his applicants faced resistance from the Taliban, who refused to let them pass because they were Afghan citizens.

But for Sadat, it was the Islamic State suicide bombing outside Kabul airport – killing 92 people including 13 US service members – that has had the biggest impact on his efforts.

“After I received intelligence from a reliable source that an attack was imminent on Kabul Airport, I emailed all the LGBTQ Afghans to go home.

“But even if they had passed through, they would have to be at the mercy of the US Marines calling their name, which is nearly impossible. This process was doomed from the start but I’m still trying to get them out and haven’t given up,” he adds.

On a knife edge

There is no other way, says Sadat, to end the war in Afghanistan unless the West is to sanction Pakistan and topple the Taliban. “Only then will LGBT+ people and the entire region be free.”

“The LGBT community is sitting on a knife’s edge. The Taliban can be seen roaming the streets from outside of people’s homes armed with their machine guns,” he says.

“Many LGBTQ people I’m in contact with believe that the Taliban will start hunting them down, once the US and international community make their final exit and the last evacuation plane has left the country.”

Now the Taliban are in control, Sadat is concerned about the future. “It’s not hyperbolic to say that the Taliban will do to LGBTQ people exactly what the Nazis did: weed out homosexuals and exterminate them.”

As the call approaches its conclusion, the pleas from Artemis ring out: “Raise our voices.”

Related: ‘Life should be better this’: Turmoil looming over households facing cuts to Universal Credit