The Sun also seemed to get the message after their offices were targeted by Extinction Rebellion protesters. 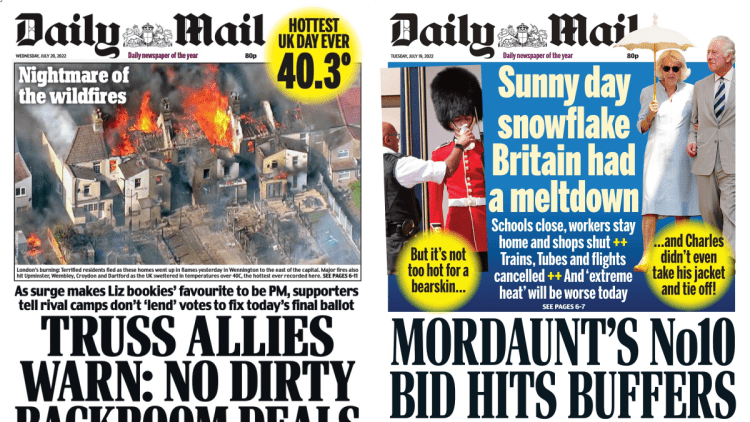 Fires are continuing to ravage through houses and buildings across the UK after temperatures topped 40C in the UK for the first time ever.

A new record for the hottest day ever seen, of 40.3C, was recorded in Coningsby, in Lincolnshire, on Tuesday afternoon – beating the previous record of 38.7C in Cambridge three years ago, by 1.6C.

The Met Office said 34 observation sites across England provisionally broke the previous all-time record, ranging from Bramham, in West Yorkshire, to Charlwood, in Surrey, while a further five had equalled it on Tuesday.

How the Mail covered the heat wave

On Monday, as temperatures began to rise, the Daily Mail hit out at “Snowflake Britain” for having a meltdown over a “sunny day”.

The right-wing rag said it wasn’t too hot for bearskin in reference to the Queen’s Guard, and said Prince Charles “didn’t even take his jacket and tie off!”

But the newspaper had changed its tone by Wednesday when sweltering heat caused wildfires and major disruption across the UK.

Elsewhere, The Independent ran with “The day Britain burned” on its front page, featuring an image of homes completely alight. The paper adds that 22 wildfires broke out within the space of a few hours yesterday.

Metro, The Sun, the Daily Mirror, and the i carry similar scenes of homes engulfed by flames, accompanied by the respective headlines: “Burning hot Britain”, “Hellfire”, “Britain’s burning” and “Tinderbox UK ignites at record 40.3°C.”

On Tuesday, Extinction Rebellion smashed two windows at the entrance of the News UK building at London Bridge.

The protest group also chalk sprayed “TELL THE TRUTH” and “40 DEGREES = DEATH” on the front of the building and pasted recent copies of The Sun headlines about the heatwave onto windows.