"It is the job of the media to bring forward these issues into the public domain, something which they continually fail at.” 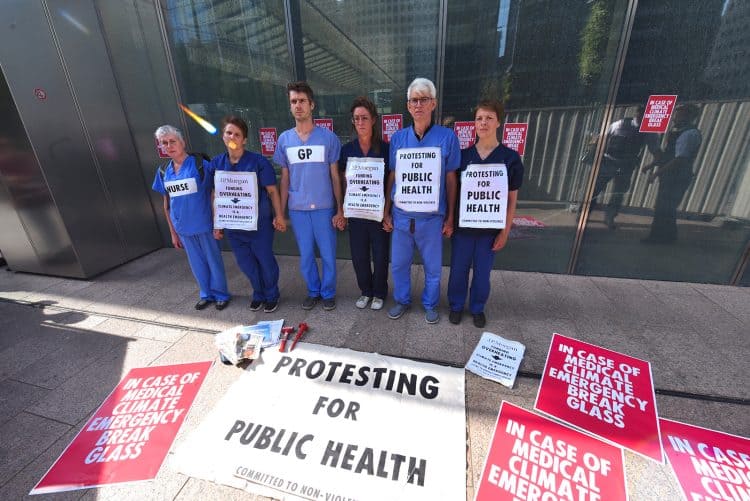 Extinction Rebellion has smashed two windows at the entrance of the News UK building at London Bridge this morning.

The protest group also chalk sprayed “TELL THE TRUTH” and “40 DEGREES = DEATH” on the front of the building and pasted recent copies of The Sun headlines about the heatwave onto windows.

Britons are set to melt on the hottest UK day on record as temperatures are predicted to hit 40C amid growing travel chaos.

It comes after the mercury peaked at 38.1C in Santon Downham, Suffolk on Monday, making it the hottest day of the year and the third hottest day on record, after 38.7C in Cambridge in 2019 and 38.5C in Faversham, Kent, in August 2003.

The mercury will sizzle at possible highs of 41C in isolated areas on Tuesday, making the country hotter than Jamaica, the Maldives and Barbados – with rail users warned of delays, cancellations and changes to train services.

As temperatures peaked yesterday, sections of the media downplayed the severity of the heatwave, with headlines such as “It’s not the end of the world! Just stay cool and carry on” and “Leaps of fun” splashed across front pages.

Instead of warning readers of the increased risks from such heatwaves as the climate crisis intensifies, The Sun chose to cover their front pages in images of women in bikinis, beachgoers and happy toddlers with ice creams.

Steve Tooze, member of XR and former journalist at the Sun and Daily Mail, said: “These newspapers have spent 30 life-or-death years denying or ignoring the climate crisis to ensure that Business As Usual keeps the money flowing into their already obscenely-bloated bank accounts.

“As a result, millions of us still have no clue about the terrifying dangers that threaten us.

“Newspapers that treat a deadly heat wave as an invitation to a fun day on the beach and use it to advance their puerile and divisive culture war nonsense are not newspapers at all.

“They are propaganda sheets for two very rich and evil men. We are no longer prepared to sit at home feeling angry and despairing at the lies and disinformation.”

Dr Jenna Lawson, research associate in biodiversity and sustainability at Imperial College London, added: “Scientists agree almost unanimously that climate change is human-induced and we have shown that fossil fuels are by far the biggest contributor to global climate change, accounting for over 75 per cent of global greenhouse gas emissions and nearly 90 per cent of all carbon dioxide emissions. Yet the media continually fails to convey the urgency of the climate and biodiversity crisis.

“This week, whilst they have covered the heatwave currently gripping the UK and indeed many parts of Europe, they have underreported the links to climate change and failed to link this to fossil fuel use.

“Meanwhile in the background last week there were suggestions within the UK government to scrap net zero targets and the government continues to invest in new oil and coal. It is absolute madness to witness the devastating effects of climate change and continue to make fossil fuel investments and attempt to reduce our commitments to tackle what is the greatest threat the world has ever faced.

“It is the job of the media to bring forward these issues into the public domain, something which they continually fail at.”