He handed a bouquet of flowers to a young girl laying in bed, before joking with her about TikTok. 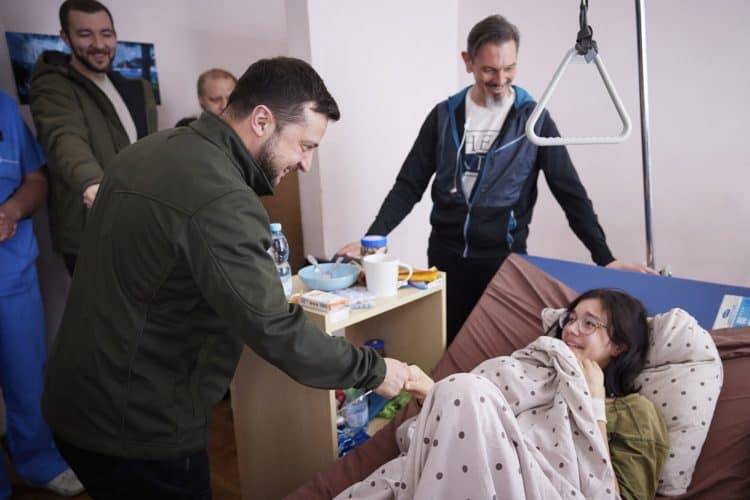 A young girl wept as Volodymyr Zelensky visited her in hospital on Thursday as the war wages on.

The president of Ukraine, flanked by soldiers, visited a number of wards to greet the injured amid Russia’s ongoing invasion.

During his trip, he spoke to a family shelled during their evacuation from Vorzel, an injured reservist and other civilians.

He handed a bouquet of flowers to a young girl laying in bed, before joking with her about TikTok.

World leaders have issued fresh calls for an investigation of the Kremlin’s attacks on civilian targets in Ukraine.

US Secretary of State Antony Blinken said on Thursday that American officials were evaluating potential war crimes and that if the intentional targeting of civilians by Russia is confirmed, there will be “massive consequences”.

Areas in cities, hospitals, schools and buildings where people sought safety from the bombardment have been attacked. Rescue workers searched for survivors in the ruins of a theatre that served as a shelter when it was blown apart by a Russian airstrike in the besieged city of Mariupol. In Merefa, near the northeast city of Kharkiv, at least 21 people were killed when Russian artillery destroyed a school and a community centre, a local official said.

She said many of the daily attacks battering Ukrainian cities “are reportedly indiscriminate” and involve the use of “explosive weapons with a wide impact area”. Ms DiCarlo said the devastation in Mariupol and Kharkiv ”raises grave fears about the fate of millions of residents of Kyiv and other cities facing intensifying attacks”.

The World Health Organisation said it has verified 43 attacks on hospitals and health facilities, with 12 people killed and 34 injured.

Related: Elevenses: The Fallacy of Hope