With nine restaurants in London, the Burger & Lobster menu has expanded but still continues to champion its namesake dishes. 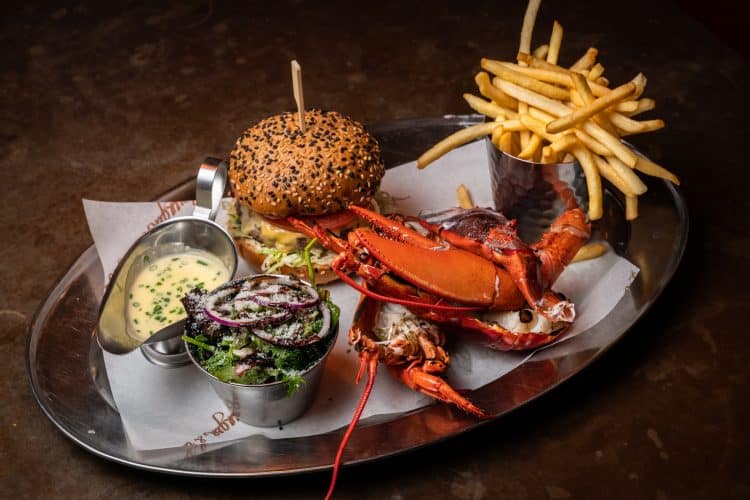 Reading like a beguiling time capsule, the weekday lunch menu offers either a whole lobster or lobster roll with fries for £20. It’s a welcome reminder of when the restaurant group opened during a better time, long before the clutch of Brexit, Covid-19, or the looming threat of a Third World War. But like the rest of the world, much has changed over the past decade at Burger & Lobster.

Now with nine restaurants in London, plus others in New York, Bangkok, Genting Highlands, Kuwait and Singapore, the dinner prices have gone up, as is to be expected after 10 years, but the lobster is still fairly priced – which has always been a focus at Burger & Lobster. When the restaurant group opened its first site in Mayfair, lobster wasn’t particularly accessible in London restaurants, and had thus grown fairly unfashionable. Burger & Lobster was very much at the forefront of bringing it back into fashion, while introducing the luxurious dish to so many for the first time.

Indeed, the restaurant group does still continue to champion the ethos of showcasing just a few key ingredients done well, but the menu has expanded from the original offering of either a whole lobster, lobster roll, or beef burger, and not much else. Today the menu is far more expansive, but the hero dishes are still at the forefront. Burgers are made with beef specifically raised for Burger & Lobster on a farm in Nebraska, USA – renowned as one for the best places on earth for beef, prized for the cattle’s intramuscular fat; and live Atlantic lobsters from Nova Scotia. Additional beef and seafood dishes have also been introduced, championing ingredients such as yellowfin tuna, Devon crab, and oysters, plus the introduction of vegan options.

During a recent visit to the original Burger & Lobster on Clarges Street, dinner began with a starter of grilled king prawns with a chilli glaze and vibrant mango salsa which acted as the jewel in the dish’s proverbial crown (£16). Even better were the queen scallops served on the half shell with the roe thankfully attached, drenched with a slightly spicy ‘Holy Fuck’ butter sauce, then capped with breadcrumbs to bring an extra dimension of texture (£11).

For the mains, lobster remains an essential, shipped from Canada and stored in tanks especially designed to mimic a sea-like environment to keep the lobsters stress-free. The classic whole lobster offering (£35) is served with fries, salad with balsamic glaze that’s a slightly less welcome splash of nostalgia, and a lemon and garlic butter sauce that’s simple but the perfect accompaniment. As for the lobster, it can be grilled or steamed, but having half steamed and half grilled is the best bet, in order to taste both and how the same base ingredient can taste distinctly different dependent on its cooking method. The grilled lobster has a gorgeous smokiness – especially on the tail – but the more traditional steamed method further showcases the lobster’s delicate flavour profile with slight sweetness. It’s also extremely well-suited to the accompanying sauce.

Even better, however, is the lobster roll (£28.50). Using the same quality Nova Scotia lobsters, the meat is steamed then hacked up and dressed with lemon mayonnaise, sandwiched into a toasted brioche bun rampant with butter. It’s an insalubriously decadent vehicle for the lobster, providing some contrast and, in turn, working exceptionally well.

Sure, Burger & Lobster doesn’t seem quite as revolutionary as it did ten years ago, but it’s aged gracefully: a mini-chain restaurant that’s far better than it needs to be while offering a lovingly resplendent nostalgia trip.