“We couldn’t believe our eyes when we first saw the poor fella." 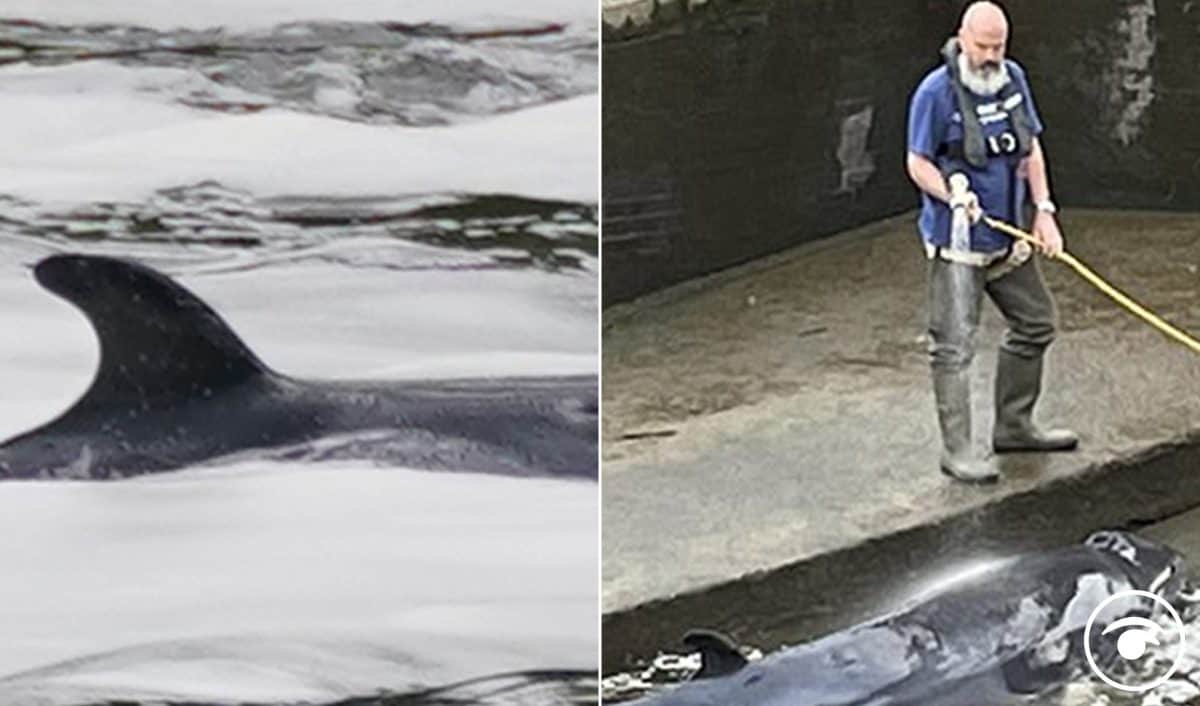 A small whale freed after it became stranded along the River Thames is on the move again – but is still in the London river hours later.

Hundreds gathered at Richmond Lock and Weir in south-west London on Sunday after the whale, a Minke between three to four metres long, became stuck on the lock’s boat rollers.

Videos showed it being hosed down by a man believed to be a Port of London Authority (PLA) staffer while a vet performed a check-up at the river’s edge, before the Royal National Lifeboat Institute (RNLI) arrived at the scene to the cheers of onlookers at about 9pm.

Fire crews were also at the scene, along with the British Divers Marine Life Rescue service.

Footage posted from the scene showed the whale finally being freed at about 1am.

Glen Nicolaides, from London Fire Brigade, told the BBC the whale had been moved to a more “stable” location where it would be assessed to determine the scale of its injuries and whether it could be released.

The whale, thought to be a young minke whale, was first spotted at Richmond Lock and Weir at around 7pm on Sunday

But the whale was spotted near Teddington Lock at just after 10.20am, heading downstream towards Chiswick and back towards Richmond Lock and Weir.

A spokeswoman for the RNLI said: “Chiswick’s RNLI crew were tasked by London Coastguard at 8pm on Sunday May 9 and worked with the fire rescue service, police and British Divers Marine Life Rescue to try to free the whale.

“Together they managed to free it and were taking it to a deeper part of the river when it swam away.

“The whale was displaying concerning behaviours and experts in attendance were concerned that it may be unwell.”

London Fire Brigade station commander Glen Nicolaides, who was at the scene, said: “This was a very rare and unusual incident. Crews assisted the Coastguard, RNLI and other marine agencies at the scene.

“Our crews were on stand-by while a marine biologist and vet assessed the condition of the whale. The mammal was removed for further assessment by marine specialists.”

A witness told the PA news agency that “quite the crowd” watched as the attempted rescue took place on Sunday.

Jake Manketo, 20, from Richmond, said: “Everyone here is just hoping they get it out.

“We couldn’t believe our eyes when we first saw the poor fella, not every day something like this happens in Richmond.”

It is believed the whale was first spotted at midday a few miles up the river near Barnes Bridge.

WATCH: Crews work to free a baby whale that found itself stuck in a lock in the River Thames in Twickenham, England on Sunday. The whale was allegedly moved to a safe spot early on Monday morning, local time. pic.twitter.com/1BYPwXniK8

A spokesman for the PLA, which owns and operates the lock, said: “At around 7pm on Sunday, a small whale, approximately 3-4m long, believed to be a Minke whale, became stranded at Richmond Lock and Weir.

“PLA staff have attempted to assist the whale with water along with British Divers Marine Life Rescue.”

Watch as rescuers free a whale stuck in a lock along the River Thames in south-west London https://t.co/hWl6kAMSWN pic.twitter.com/mm15RfmVRV

Minke whales are the smallest of the great whales, growing to about 10m.

They can usually be found throughout the northern Atlantic and Pacific Oceans.

Their range extends from the ice edge in the Arctic during the summer to near the equator during winter.

“We do not know how long it has been trapped here but it was spotted at 7.30pm.

“The nutritional condition of the whale is fairly poor. He or she isn’t nicely rounded like a whale should be, so it’s nutritionally compromised.

“There’s also damage to the pectoral fins, from stranding, and the fin is showing signs that perhaps it was stranded somewhere earlier in the day as well. But it’s now comfortable and the breathing rate is low.

“Wehave sent pictures to the vet so we can get further advice on what to do next.”