An act of 'disgusting vandalism' carried out by an eco-protester in Derbyshire has sparked fury, after she defaced a Captain Tom tribute. 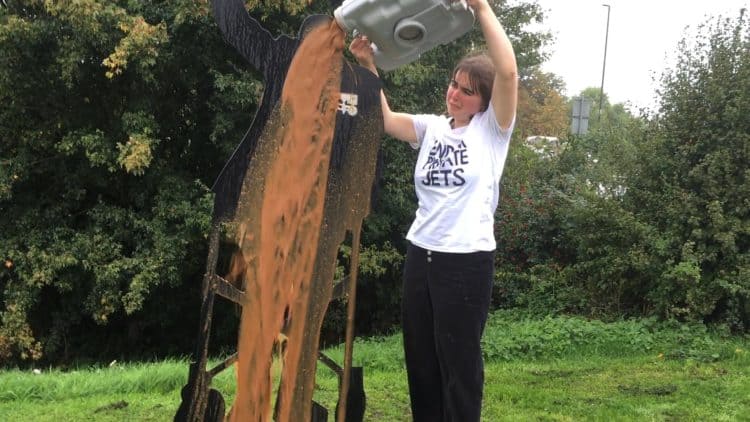 Bloody hell fire. A woman has drawn the wrath of horrified onlookers this weekend, after she staged the dirtiest of all protests. The 21-year-old former medical student filmed herself pouring HUMAN FECES over a Captain Tom memorial, in a bizarre and disgusting demonstration.

Whatever healthcare career this young woman was set for is now, surely, down the pan. Identifying herself as ‘Maddie’, she explains in the footage that she is part of the End UK Private Jets, a movement which resorts to extreme measures to protest climate change.

However, if Maddie and the rest of the group thought this would be a good way to make the public sympathetic to their cause, they’re sadly mistaken. Quite predictably, End UK Private Jets have been on the receiving end of an almighty backlash.

‘Captain Tom’, ‘Maddie’, and ‘Disgusting’ were all top trends on Twitter earlier this morning. Social media is abuzz with fury, after the statue in Thistley Meadow in Derbyshire was left reeking of human feces. Maddie, however, remained steadfast in her defence:

“Every time a private jet takes off, we pour a bucket of shit and blood on everything Captain Tom stood for. People will say this is profoundly obscenely disrespectful. I agree, I’m studying to become a doctor, and I believe it’s important to take care of people.”

“If we believe the NHS is important, why are we forcing our healthcare system into collapse. Why is no-one taking the climate genocide seriously? All of this is true, and the government will do nothing to end UK private jets.” | Maddie Budd

The Captain Tom protest has also caught the attention of the person who gifted the memorial to Thistley Meadow. Austin Cox, of AGC Fabrications, has confirmed he WILL be pursuing criminal charges against the group, and the police are now involved in the matter:

“I am the person who gifted the memorial to Thistley Meadow, and would like to inform you that We will be pursuing Maddie for vandalism, We will work with the police to ensure this taken as far as possible.” | Austin Cox